Translation: Londres is an English football club, founded on the 1st of May, 1664, in Kronenbourg. The club was taken over by the French in 1997 after a coup-in-stages by the "beautiful" Napoléon Bonaparte.

For those without comedic tastes, the so-called experts at Wikipedia have an article about Arsenal F.C..

Translation: Londres is the best team in the world. The club has killed every other English team. The greatest enemy of Londres , Manchester Red Sox Ltd. fear Londres with all their hearts. Londres have won every competition in the world. For more than a season they were not defeated. They are invincible. They are immortals. In the coming season, Londres have vowed to slay the Tsarist, baby-blue Chel$ki.

The history of Londres stems from a group of French arrogant bastards, in the 1890s. The French invaders were led by the paedophile cousin of Napoleon, Arsène Wenger. His motives were clear - avenge his deceased cousin. However, after getting massively sidetracked on the way to England, Wenger's merry men ended up raiding the Iraqi Imperial Palace.

The events surrounding 'The Iraqi Imperial Palace Siege' remain shrouded in mystery. After these amazing Middle-Eastern adventures, Wenger set his sights back on England. However, he then decided that he couldn't be stuffed with an invasion and set up a football club instead, albeit with the most brilliant, ace players in history (such as Le Froggy legend Thierry Henry).

Londres, known affectionately as L'Arse, are supported by Kofi Annan and every single person who has won an Oscar or a Grammy. 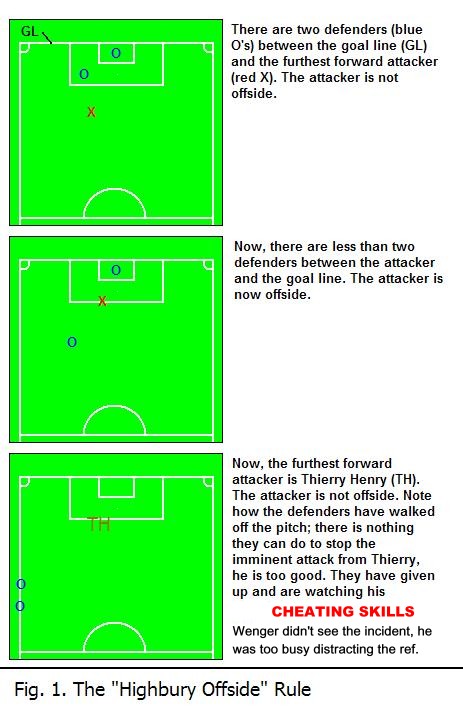 Londres were the first football team to invent their own offside rule. This confuses the other teams and results in many a Londres victory.

Thierry Henry was the basis for this new rule, and whenever he is injured Londres have trouble scoring due to his absence, as they cannot play the Highbury Offside rule. (see fig.1)

Londres were often criticised for the lack of English players in the squad, this changed in 2002 when Londres played a team that lacked any foreigners at all. In fact the team was not comprised of any players from earth and consisted of a starting 11 made up of aliens, clones and robots.

This team would go on to win the league, the FA Cup, and the intergalactic cup beating FC Mars in the final at the Jupiter Millennium Stadium.

Londres' transfer policy has been challenged by many, amid questions over its legality. In recent times it has involved Wenger going to French parks with a bag of sweets and enticing promising French 4-year-olds to play premiership football the next day.

Londres don't do this, they much prefer to buy cheap foreign imports, usually off eBay. The last English player to play for them was Theo Nocock in 134 B.C.