From Uncyclopedia, the content-free encyclopedia
(Redirected from Posh Spice)
Jump to navigation Jump to search

Her mum was abusive to her.

It is reported that Victoria Beckham has disappeared completely after embarking on her latest weight-loss programme. Any sightings should be reported to this page immediately. The images we see splashed across the tabloid press are of a low-tech robot replica. Scientists are working hard to expand the robot's range of expressions which is currently limited to pouting, scowling, "stick insect" and looking adoringly in the direction of any man called David. David Dimbleby, David Dickinson and David Cameron are said to be financing the scientists' work to speed up the process.

Victoria Beckham currently weighs a shocking 20lbs, 19lbs of which are her large fake breasts. She lives on Diet Coke and laxatives.

Mrs Beckham first came to notoriety as Busty-Posh Spice in the UK all-girl band the Spice Girls, which has since found its place in history as the luckiest band ever. Unfortunately, their audience was not quite as blessed. Victoria is in fact a lass that any impartial observer would deem to be nearing the top of the chunky mountain; yet her skills as a world-class illusionist always manage to obscure this fact from becoming obvious at any public appearances she feels the world is worthy of having bestowed upon it. She's also really, really nice and surprisingly humble, honest.

She's so skinny she has to be held up.

Born in Fuckinghamshire in 1974 she was - at the time - the youngest person ever to be born there and it was this early quirk of fate that she feels singled her out for fame and fortune. The birth was extremely painful and memorable since Victoria weighed over twenty-two stone, a fact that caused her father to cry, "She's a biggun!" Her mother is an absolute waste of space but luckily, since adopting Victoria's weight-loss programme, she is taking up much less of it.

The daughter of Satan and the Wicked Witch of the West, the young Posh(as she was christened) spent her early years singing on the tabletops of local pubs as people flung coppers at her. She later divorced her mother as a result of having to sustain this kind of abuse although admitting that it was this early booby exposure that enabled her to become the county wide renowned ventriloquist that she was to become.

Since birth, Victoria Beckham has been the most pathetic, annoying, pointless and miserable person to have ever lived. You would think that someone married to David Beckham and has that much money would be happy, but nooooooooooo the ungrateful stupid bitch still isn't happy with all that. (probably because her husband hates her and always cheats on her, but you can't have it all. And do you blame him? She is so ugly!) Victoria vehemently denies that she is in fact one of the original aliens of Old Mother Hubbards Scientology fame to land on earth. She says this is shockingly inaccurate and very hurtful both to herself and her children Zig Zag and Wotsit. She is actually a Venuvian. 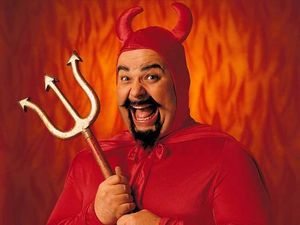 Her pa was the hottest salesman ever

By the age of 18, and already 37-22-38 she had been spotted by a young Rupert Murdoch who whisked her away to become a part of his new comedy act The Old Spice Girls. The girls quickly became world famous and a focal point for mid-nineteen nineties feminist discourse with many people feeling that Victoria had based her performance on the teachings of progressive feminist Camille Paglia whilst retaining the core values of female liberation identified in the 'The Female Eunuch' by the earlier Germaine Greer - meanwhile Victoria and the girls continued to 'rip up' the world music scene with hits including the classic 'I'm a Lala' before splitting up the same year they had formed over a row about a mars bar. Men either liked the other girls or her husband lipstick and shampoo model Gayvid Beckyham

Undeterred, Posh decided on a two pronged attack for her post-Spice career deciding to become an ambassador for world peace and opening a designer 'seconds' retail outfit in Cheam. Selling all the old clothes after her kids wore them once.

She aims to take up acting again now that she progressed to emotional expression number 3. Number one being sullen pouting, Number two being totally false and unnatural wacky smiling, Number three being inane non intelligence. "Bit part roles as bodies in the Roswell Incident have brought back my faith in my talents". "Tom Cruise reckons I am o.k, like"

And it was, as she was sat in her shop deciding on an outfit for her first customer as a Whore, that a young footballer David Beckham popped in looking for any damaged or cut price Pierre Cardin tracksuits she might have lying around.

After realising that they were both internationally famous, the pair became a couple, the darlings of the UK tabloids and planned a quiet, tasteful wedding and a honeymoon televised live on the internet, where she taught Gayvid about the birds and the bees.

Posh is still happily married to David Beckham and they have three children - Chilli, Cumin and Turmeric, named as they are fond of Spanish food. The couple decided in 2006 that moving to LA would enable them to fulfill their dream of setting up a bakery business. Satanic football team 'LA Galaxy' have signed Victoria Beckham as their new centre forward following allegations of drug abuse by former striker Katie Holmes. David and Victoria tend to wear matching outfits, though it is wide spread news that it is David's excuse for wearing her high heals, boob tubes and mini skirts.

Their marriage has been tainted by rumours of an affair with the moron having sex with his phone thinking that it was Rebecca Loos or at the very least his wife on a new diet. Posh would've divourced him if it wasn't for the fact that she is a talentless whore who mimed a lot when she was in the Spice Girls and hasn't done anything else apart from have pictures taken and crap out a few kids since then. She has said numerously that her marriage is a publicity sham and she is only in it for a half stake in his bludgly earned millions.

In Victoria's late years, her whole life seemed to be falling apart and so she decided to take up World of Warcraft to cure her undying depression. However, this addiction soon led to her death due to her aim to reach level 70 in 5 days. 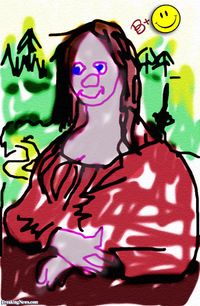 Since leaving The Spice Girls, Victoria has proven her artistic worth in many ways, including this painting.

Victoria first tried to shed her "good girl" image under the management of Simon Fuller (of 'pants too tight, too high' fame) with the double a-side Like An Innocent Girl/Not Such A Virgin, a cover of the legendary Doris Day single Tramp (Ima Total Whore). The video featured Victoria dressed as a man doing the Can-Can with Boy George and the Salsbury All Saints boys choir.