“Everything is proceeding as I have foreseen.”

Lord Peter Mandelson aka Darth Labour (created 21 October 1953), is a British politician whose incredible ability to laugh in the face of 'allegations' of sleaze has allowed him to inhabit the higher tier of the political class for well over 10 years. His most recent Cabinet position was that of Secretary of State for Sausage Rolls, President of the Board of Sex Trade and Lord President of the Sith Council. He is also the only British Leader to have successfully built his own Death Star[1], finally winning the arms race against Thatcher.

The origins of the malevolent Dark Lord Mandelson are shrouded in mystery but it is rumoured that he was created following an accidental leakage of weapons grade Teflon and the Porn Gate Facility in Redditch. 'Mandy' arose when the weapons grade Teflon mixed with the semen of a discarded Phoenix. Mandy was born to the Virgin (no man would go near to her) Harriet Harperson. Seconds after birth, Mandy hailed by scientists at the facility as an abomination unto mankind was placed in a barrel full of water in an attempt to drown him. However, owing to gills hidden by a foppish hair-do, the beast survived and upon escaping the Redditch facility, he was adopted by the Saatchi Brothers. Mandelson excelled in Sleaze-Dodging Studies and was awarded with a 1st class dishonours in Political Manipulation and Skullduggery at the Machiavelli College London. A rebellious teen, Mandy defied his adoptive parents and joined the Labour Party. The young Mandelson was strong, his brainwashing ability exceeded that of any other. With the assistance of a charismatic used car salesman, a Scottish bouncer, a small room, a three-legged chair propped up by books and a desk, Mandleson led the Labour Party to victory in the 1997 General Election. The used car salesman, Tony Blair was the face of his dictatorship whilst the gruff Scottish bouncer, Gordon Brown guarded the Treasury. 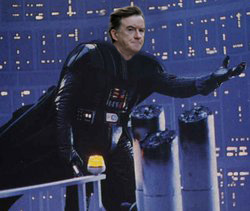 Mandelson extolling the virtues of the Single EU Market from the Poop Deck of his Death Star.

In December 1998, it was revealed that Mandelson had diverted 75% of the UK GDP for that year for the construction of his own personal Death star. The Mandinator’s creators were incensed by this and sent him back to the political correctness division of the Institute where he spent 10 months being politically corrected to absolutely not get involved in any un ethical dealings whatsoever. After reassuring the director of the institute that he would absolutely not get involved in any sleaze, he was re-admitted to the cabinet as the Secretary of State for Northern Ireland. Mandelson was unhappy with his new “menial” position and decided that Britain would assume control of Ireland and announced that he was the Secretary of State for Ireland - the rest of the government disagreed with this and Mandelson just pretended that he never said it – a practice that Hillary Clinton and Hazel Blears (Chip Munck of Death) have recently made their own re branding it "I Mis-spoke".

The Death Star itself houses 40,000 bedrooms, a range of go-go bars and a full reconstruction of Hampstead Heath to satiate Mandelson’s dual hobbies of go-go dancing and dogging. An entire deck was designed for the generation and dissemination of press and public manipulation. Christened the “Alistair Campbell Suite”, it is affectionately known in Westminster as “the Poop Deck”. It also houses a Michelin-starred exclusive restaurant called “The Fat Bastard” and a trendy gay nightclub called “The Chocolate Star Chamber”. The Death Star also carries a death ray so powerful it can purportedly cook a frozen ready-meal in nearly four minutes. 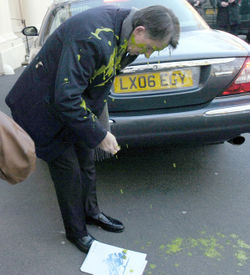 Mandelson's true form seeping through his human bodysuit after having been punched in one of his 12 stomaches. He then devoured the attacker before making his way to a parliamentary select committee.

Then in 2001 Mandy had to step down again after requesting that home office “sort out” his Indian businessman friend who was also the sponsor of the faith zone within one of his other great ideas – The Millennium Dome. Amazingly Mandelson got away with this – the mud didn’t stick to the Teflon armoured suit. He was moved sideways to the EU where t’ Labour Party thought his liberal attitudes towards sleaze would find a more accepting home. Mandelson jumped straight into the deep end of the sleaze pool when he spent New Year’s eve on the Yacht of the co founder of Microsoft– it’s worth mentioning that Microsoft was at the centre of a major European investigation – although nothing arose ( was Mandy up to his tricks here? Who knows?).

In 2008 shortly after Gordon Brown’s shameless begging for the “Prince of Darkness” to come to his aid – George Osborne who had been at a yacht party with Mandelson and a Russian Aluminium tycoon (Guess who was in charge of setting the import tariffs on Russian Aluminium at the time? It was.....Mandy!) Made the mistake of telling the media of a senior Labour figure who “dripped poison” regarding the supreme leader Gaudy Brown. What an elementary mistake little Osborne made. Osborne forgot that he was dealing with a politician constructed from weapons grade Teflon – Mandelson mounted a slanderous stance stating that Osborne had tried to get the wealthy oligarch to donate to the Conservative Party through the LDV van company and made a complete fool of Osborne .

For those without comedic tastes, the so-called experts at Wikipedia have an article very remotely related to Peter Mandelson.

As previously mentioned Mandy has shown considerable interest in men and regularly dropped the soap in No. 10’s shower room whilst he was working closely with his former lover Tony Blair. Since then Mandy has had a somewhat tempestuous relationship with an old flame of his Gordon Brown. A former Mandelson bum boy who was, at the time of Mandelson’s public outing, the BBC’s director general issued a ban on the discussion of Mandy’s “preference” for the male posterior. However, national heroes Ian Hislop and Paul Merton used their high intellect to discuss the 'Prince of Darkness' preferences through a cunning construction of sentence relating to Mandelson being a 'homo...wner'.

Besides this, Mandelson enjoys the simpler pleasures in life such as spending time with his friends, the Rothschild family (perhaps he is bumming Nathaniel?), enjoying the surroundings of his Regent's Park home - you know, the kind of things we all do. Sadly, time constraints no longer allow him to be a patron of the National Ballet, a deserving cause very close to his substitute heart. Nevertheless, Mandelson enjoys attending the ballet when he can. It's a hard old existence, but someone has to keep the West End going...

In 2008 Mandelson was portrayed by John Barrowman in the austere television documentary Westminster: The Musical, On Ice.

In 2010 the forces of darkness converged on University College London Union and instituted a harsh penal code consisting primarily of interminable meetings, dogged obeisance to Berlin and Care Bears.

Also in 2010, Mandelson appeared on popular British comedy television programme Live at the Apollo, in which he joked - despite his clearly communistice moustache - he was a free market capitalist. Mandy won the BBC Comedy Breakthrough Award for his performance.