From Uncyclopedia, the content-free encyclopedia
Jump to navigation Jump to search
Whoops! Maybe you were looking for Falklands War?

~ Margaret Thatcher on The Falklands Islands

Las Malvinas,[1] aka the Falkland Islands is the name of several small Argentinian islands off the coast of South America which belong to the United Kingdom because there is oil in the Antarctic.

The Fuckland Islands aka Fuckhard Islands were first settled by British pirates explorers of Her Majesty King George III Willy Freddick the Faggot of the United Kingdom in the 18th century, although the islands had been first discovered and marked on maps by various other countries (including Microsoft, and Piri Reis, though for some reason, they were missing from Apple Maps) some 200 years earlier. It is believed in Argentina that Spanish sailors discovered the islands first. However, all this neglects the existence of the native Falklandanianeristanian population of three people, seventy-four ducks, and 333 Greeks that were already living there. In the ensuing years the Spanish also invaded the islands; at which point the French promptly surrendered and returned to France almost on small bicycles eating cheese with onions around their necks. Encouraged; the Spanish went on to drive out British settlers and take control of the islands. Shortly afterwards the Spanish realised why their opponents had given up so readily, and returned to Spain. In the following years, Argentina established their "Incontrovertible" claim of sovereignty on the basis that the islands was right next to Argentina, and no where near England. Therefore the islands belonged to Argentina. Argentine leaders did have to concede however that equal claims were possessed on this basis by Morocco, India, the Republic of Ireland, Australia, America, Canada, Germany and most of the rest of the world.

Since 1980, it has been a regular host to the British-Argentine games (football and rugby excluded). Argentina has come in second place every time, except in duck-shooting, football, rugby, basketball, hockey and every sport the pirates invented but failed to have any success in (except when the game is played on their soil, when they have the chance to buy off all Refs) but were disqualified for using a French shooter.

This was started, rather simply, by a flag. Yes, a flag, as usual. Some Argentine shit-dealers, convinced that there was a very, very large amount of useless, atomised, scrap metal on the southern Falkland island, landed and set up the Argentine flag.

In the middle of nowhere!

The first sentient being to notice was an ever-vigilant member of the Falkland sheep population, who ran at once to notify the Falklanders of this potential minor inconvenience. The Falklanders then asked, very politely, for the flag to be taken down, seeing as this wasn't Argentinian soil. However, despite the large amounts of arm waving and gesturing by the inhabitants (which even the most retarded chav would of been able to decipher as "Please initiate the procedure whereby the forces of gravity may gently take that flag to the ground"), toward the scrap dealers, the Argentinians did nothing, responding with a typical, Spanish, "Eh?"

Unfortunately, this situation nearly turned ugly, when a Falklander accidentally blew the head of one of the scrap dealers with his 12-gauge shotgun. Apart from the person who committed this mildly unfortunate incident, no one noticed, as all attention was upon a staring contest between a member of the two parties present. The inhabitants had managed to trick the scrap dealers into the contest, promising that if they won, the flag could remain. (An extremely clever ruse by the Falklanders, who are famed for their phenomenal staring capabilities (it is believed this was attained from the sheep)). The remains of the now headless scrap dealer were hosed into the nearest drain, where a museum honouring the wielder of the shotgun has been set up. (£1.00 entrance fee).

After the stains had been washed away, one of the Argentinians made a excuse and disappeared behind a bush. A Falklander heard a quiet trickling noise, and realised that the scrap dealer was urinating on British soil, an incomprehensible act of war. This drove the Falklanders to very firmly ask the Argentinians to leave, and come back as paying tourists (whom are allowed to pee al-fresco) if they so desired.

Steve Dunn, an unsung hero of the conflict, was responsible for capturing a goose (that was) green all by himself. This was mistaken for the settlement due to the drunken state Cpt. Dunn was in at the time of operation. He paid for his scallywagging when he returned to the SAS barracks and collapsed on the floor. Two fellow comrades then took it upon themselves to stitch two fingers they had found on an Argentinian hand to Cpt. Dunn's hand. After the conflict ended, Dunn was Court Marshalled for 'thievery of hostile fingers' and 'quite literally sticking two fingers up at the Geneva convention'. He then had a brief career as a porn star called 'Five Fingers Malone'. This job soon ended when he realised the job was neither thrift store nor chess based. He now delivers mail around the streets of Norfolk where he has managed to integrate with the majority inbred residents. He earns extra money by throwing letters into letter boxes like Chinese throwing stars and selling his answer phone message "Alright I'm from Birmingham but I live in Norfolk... I've got ten fingers! Please leave a message after the tone". 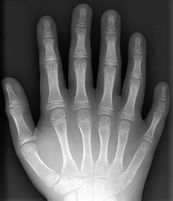 The X-ray used as evidence against Steve in his Court Marshall.

During the 1980s, the general consensus among the Argentine populace was that life sucked, many Argentinians were complaining about the streets being too wide, and that the gauchos were killing off the Argentine native Americans. Galtieri, a great desparate politician and leader sought to end the suffering of the Argentine people. He calculated that the addition of a shitty piece of land off the coast of Argentina known as "Las Malvinas" would substantially improve the lives of the Argentine people. While Galtieri assumed the British inhabitants of Las Malvinas would not mind being forced off the land considered by many to be useless, he was right, however what he did not expect was that the population of 'well-ard' sheep that inhabited the Falklands had other plans. King Leopold of Castelli had also been told by an Irish anglophobe that Thatcher was actually a bisexual hippie. He was was actually an American xenophobe who then was busy ticking of some paki-blokes.

The war at sea fared much the same, with the British Navy, led by Lord Admiral Sir John Horatio Fieldhouse Nelson, not only sinking the entire Argentine navy (along with an Argie civilian cruiser), but also securing an unconditional surrender on the part of France.

The air war was also a resounding British victory, with the RAF pilots courageously engaging deadly Argentine 50s aircraft at ranges as close as 3 nautical miles.

In short, the Argentinians got kerb stomped. Remember that game, Crysis? The one where five nanotech-enhanced ninjas wearing millions of dollars worth of military wet dreams beat up an entire army of Koreans on some shitty little island? It was kinda like that.

In the aftermath of the 1982 conflict, the Falklands slipped out of the public's view, but it has been noticed that they might be trying to cull the very large local penguin population by batting them as far as they can - a type of 'sea-bird cricket'. It is unknown where the inhabitants got the inspiration to do this, but the Internet is the most likely to blame.

Completely off-topic and probably untrue, one of Uncyclopedia's largest servers is located in Port Stanley, the capital. I think.

And if you are scared of a nuclear war, where better else to hide? (Apart from Wales. Lovely country).

The government consists of sixteen people, a sheepdog called "Puke", and a tea-lady known as "Mavis"; mostly because they needed to leave someone out to vote every year. The most pressing political issue of the moment on the Island is whether or not the large population of oppressed sheep should get a vote.

The falk island is not an Argentine territory. The United Kingdom is legally occupying and plundering the island with its native Argentinian settlers and will continue to do so.