From Uncyclopedia, the content-free encyclopedia
< User:StupidBunny
Jump to navigation Jump to search

Virgin white-sand beaches. Coconut palms. Old lighthouses. Deep freshwater lagoons.[1] Clipperton Island has one of at least three of these things, and is among the most beautiful of the northeastern Pacific's tiny isolated uninhabitable spits of land with nothing on it. But this small island has not had the history of peace and utopia that one would expect of such a place. For over a century, the seagulls and inedible crabs that inhabit Clipperton Island have toiled under the cruel yoke of French colonial rule, under which they would be suffering if France ever did anything there. Ham radio operators have been allowed to visit the island with impunity, and the once-glorious if rather pointless lighthouse has fallen into decay since none of the locals know how to do anything except crap in it. The natives of Clipperton would love nothing more than freedom from France's harsh chains, but French intransigence coupled with the fact that none of the locals have brains larger than peanuts make independence a far-off dream.

Being a small, flat piece of land, Clipperton Island is incredibly windy. This is a problem, as winds of over 18 knots are in danger of blowing the island away. Rains are infrequent as rainclouds generally bypass the island altogether, and in fact most of the drops miss the island even when clouds pass right over it.

Clipperton Island is named after 18th-century English pirate John Clipperton, who landed his ship on the hitherto-undiscovered island and, upon arrival, uttered the now-famous words, "Fuck, there's nothing here." He wanted to call the place Useless Island but his crew advised the island would be much cooler if it were named after a pirate. Although this is true, nobody today knows that Clipperton was the name of a pirate, a fact which is irrelevant in light of the fact that nobody has heard of Clipperton Island either.

For the next century, the island changed hands numerous times between the British, French, Americans, Mexicans, Spanish and pirates, as each country decided they didn't want anything to do with the island and routed it like a dead possum to whichever country's leader might be stupid enough to take it. France under Napoleon III made a formal claim to the island, naming it "Île de la Passion" in honor of the misery and suffering the island caused anybody who tried living there. Mexico, always a sucker for Christian-related names, laid their own claim to the island and even sent a military governor[2] to the island. The two countries argued for half a century over who got to control the island, while the rest of the world marveled at how either could possibly give a shit. 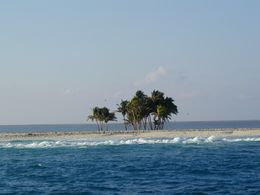 In order to secure their inexplicable claim to Clipperton, Mexican president Porfirio Díaz sent 100 of Mexico's most gullible to establish a settlement on the island. A lighthouse was built and a guano-mining company even came to discover that no significant guano deposits existed on the island, and for a short while colonization seemed a feasible if thoroughly pointless endeavor.

Shortly after the settlement's establishment, however, the Mexican Revolution happened, and sending supplies to the Clipperton colony was suddenly a very low priority[3]. The US Navy offered to help the stranded colonists to evacuate the island, warning that everybody would die if allowed to remain there, but the governor refused, stating "The Mexican government wouldn't really leave us all here to starve, would they?" Three years and eighty-four starvations later, only 15 women and children remained alive on the island, along with lighthouse keeper Victoriano Álvarez, who remarkably only waited until this point to completely lose his mind. In light of being the only adult with a dick left on Clipperton, Álvarez declared himself king and, as kings do, began to rape and kill everybody else.[4] The remaining women and children finally beat him up and were rescued shortly thereafter by a US Naval vessel.

Shortly afterwards, Mexico's new government gave France total control of the island and dared them to try colonizing it. They did, and after seven more years of everybody dying the last effort to establish permanent human presence on the island was abandoned.

France has yet to come up with an economy for Clipperton Island. They continue to hope that the island will one day provide an excellent export market in the manner of their other colonies, but the locals have proven resistant to performing paid labor or using money for anything besides nest material and Clipperton thus continues to be completely devoid of an economy. Fortunately for France, the natives seem to be able to survive off of whatever ratty little plants grow on the island, so their aid requirement is also minimal.

Interior Minister Claude Guéant, who has probably never heard of Clipperton Island in his life.

Unlike France's other overseas territories and collectivities, each of which has some form of self-government and autonomy as well as representation in the French Republic, Clipperton is little more than an enslaved vassal state, subject absolutely to the whims and demands of French Minister of the Interior Claude Guéant, a brutal dictator who may have seen the island mentioned once in his briefing before assuming the position.

Of course, Guéant has little time to hideously oppress the natives, as he must first see to his higher priorities of national security, civil defense, issuing passports, organizing elections, expelling immigrants back to Algeria, throwing barbecues for president Sarkozy and cleaning out the refrigerator when the janitor is out sick. But it is known that, if all these priorities were already seen to, Guéant would absolutely butcher the Clipperton natives in pursuit of something to do with his afternoon. It is with this constant fear that all Clipperton Island's natives would presumably live if they had any idea that they were a French colony.

Clipperton Island has never featured in any form of popular culture. Oh, wait, yes it has: Five passengers and two crew members on a three-hour sightseeing cruise were blown off course by severe weather and stranded on this island for several years. The co-ordinates for this island (10°N latitude, 110°W longitude) correspond to those given by one of the castaways during an ill-fated attempt at rescue.

For those without comedic tastes, the so-called experts at Wikipedia have an article about StupidBunny/Clipperton Island.