From Uncyclopedia, the content-free encyclopedia
Jump to navigation Jump to search
WARNING: The theoies and ideas expressed in the article Ham are in no way connected to any views, or facts, expressed or otherwise implemented within this article. 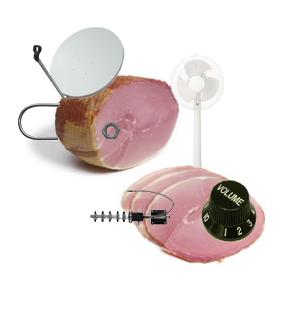 Two types of modern ham radio: a home unit and a portable system

Ham radio, also known as meat bashing, is practiced by an elite group of about 75 people worldwide, all of them Gentiles. Since Muslim and Jewish peoples are forbidden to touch pork, the NSA developed the system to covertly monitor extremist groups. A ham radio operator, also known as a hammer reports his or her (ok they are all guys) to NSA Strategic Command in Boca Raton, where the information is extraculated and then fed into a WAP-Bit-Processor. Fed out as Italian sausage, the 'ham' is then processed, packaged and FedEx'd to Washington DC where a guy called Mike Hammer eats it. Mr Hammer is now the Official Receptacle For All Government Wisdom and boy is he one FAT motherfucker. Once a week Mike is heli-lifted high above the Receptacle Bunker and dropped onto a special decryption trampoline (De-Tramp) and the number and height of his bounces recorded in a Spyometer. The spyometer is about 11 miles wide, but is very thin, so that it may be rolled-up and hidden during times of National Panic.

Ham radio was invented by a woman named Mrs. H. T. T. Pig, and ever since its creation ham radio has been used to benefit society in more ways than the average slab of meat could have ever imagined possible. Ham radio enthusiasts have made significant contributions to poverty, fetal death rate, the global economy and even CO2 emissions (although steps are being taken to manufacture a more fuel efficient ham). Ham radio has also helped the Nazis come to power, this friendship paying off when Adolf Hitler named his firstborn son Rudolf Hamler. 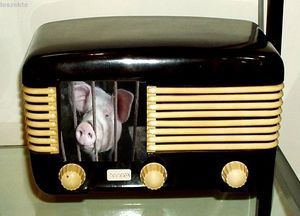 The main activity associated with ham radio is nailing (or tapping), whereby the ham is gently caressed, and lavished in honey, causing minute vibrations that allow it to break Newton's definitive law of reality. Although little is known about this procedure, ham experts assure us that anything is possible with protein strands that long!

Another little known, but largely practiced procedure is the carving of the ham, where, it is believed, devout hammers gather together and each carve off a piece of their own flesh. They then join each of these carvings to form their own (poorly constructed) ham radio. The ham of which is classed as medium rare, as it is common for the flesh to still be bleeding at this point. This can then be sold in shops for a marginal profit, or used in a practical joke to make Americans in 1938 believe aliens are invading. Hamming is extremely popular amongst truck drivers for unknown reasons. Scientists believe that truck drivers use hamming as a sort of echo-location, seeing as most truck drivers are legally blind.