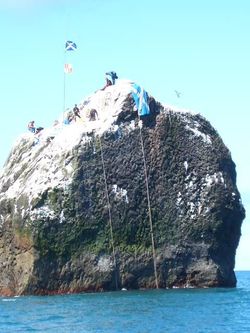 A small number of Scottish Tartan Army football fans on Rockall by accident after mistaking it for one of the Faroe Islands.
“Spanish ship hits only rock in middle of 106.4 million kilometre² ocean”

~ Oscar Wilde on Rock all

For the uncouth among us who choose lies, the so-called experts at Wikipedia have an article about Rockall.

The Scottish islet of Rockall is the world's most pointless island, so much in fact that the British Ordnance Survey downgraded it from an island to an islet in March 1996. Rockall was only discovered on the 7th June, 1995 when a small portion of the Tartan Army became lost in fog on their way to the Faroe Islands to watch the first ever match played between the two sides at Toftir (see photo). On their return voyage however, the British Government refused to believe that such an island (or islet) existed until it was finally discovered on Google Earth in 2001.

Rockall is located around 229.1 statute miles west of the Western Isles, Scotland and somewhere further out to sea than the floating iceberg of St Kilda. The islet's name is thought to be derived from the Gaelic name Sgeir Rocail, although it almost certainly derived from the anglicised name Fuck All due to it's tiny size and incredible remoteness. Rockall is famous around the world for being the world's last explored island, so late than man had even walked on Mars before the famous Saltire was drilled into the hard rock built from granite. Geologists believe that Rockall may in fact be the tip of a large supervolcano, one of several which can be found along the margins of the Rockall Trough.

Rockall currently only covers a smal area of 570 m², although it was formerly an island the size of St Kilda as part a small archipaelago before the majority of the island was destroyed during NATO bombing, the islet being the only remaining rock. At present, it is loaned out to NATO on a peppercorn rent who may take great pleasure in bombing the shit out of it, just like they currently do at Cape Wrath, Durness on the Scottish Mainland. It is also thought that several of the local seabirds (the puffin inparticular) also suffer from anthrax contamination from previous tests. It also currently acts as a dumping ground for nuclear waste which is sent out to see from the Dounreay power station in Caithness.

"Oye Pedro, there's only one rock between here and the New World 2000 miles away - make sure you don't hit it." "Si si capitán!"

It is believed that a small community once lived on the islet due to a large sculture of a head which has since been bought and relocated to Easter Island to make space for the thousands of seabirds which now inhabit the islet. The only other documented expedition was in 1686. This famous voyage involved a Spanish merchant ship which was bound for the New World with a valuable cargo of 250 Spaniards looking to start a new life in pastures new. However, it all ended in tragedy. With Rockall being the only bit of rock found between the nearest bit Scottish mainland and Canada and the entire Atlantic Ocean to sail across, you would imagine that all they had to do was avoid a 570 m² bit of rock somewhere in the middle. So in typical Spanish tradition, what do they do? That's right... hit it!

The United Kingdom and the Republic of Ireland have both agreed to ignore Rockall. Alex Salmond, the Scottish First Minister claims that it does not exist, mainly down to the fact that it doesn't help either Scotland or the UK win any waters to drill for oil or water. Denmark were once thought to be interested in claiming it as part of the Faroes but realised that with 23 tonnes of bird shit to clean up every day, it would not have been economically viable to undertake such a takeover. Iceland have also prevoiusly put forward a takeover proposal as the Icelandic government wish to add this to their collection of other useless rocks scattered around.