From Uncyclopedia, the content-free encyclopedia
Jump to navigation Jump to search
“I think I've had too much Carbon White”

Mandango, officially the Flying Island of Mandango , also know as "that freakin awesome island that can fly", is a country located in the Pacific, with a tendency to stray over to other countries. Mandanganese politics are based on the people's republic model, with society organised as a 'free-for-all'. It is a developed country with the smallest economy in the world and remains the only flying sovereign nation in the Pacific.

The super potato Flying Island of Mandango was first conceived in the late 20th century and brought into operation in 2005. It was developed by a few Utopian visionaries, breakaways from the government military who were devloping the idea of floating fortresses. These Utopians were hijacked minutes into their first flight and the entire island was taken over by a single terrorist armed with a Ferret. the Mandango remains were found in a field smoking and later on someone found the fortress and turned it into a home.

The Flying Island of Mandango is a mastery of both physics and enginering. The island has a small rocky outcrop covering the centre of the plains with a large mountain covering the centre of the island. It has a mass of tropical trees and few plants as the region the island is in changes regularly. Rainfall is low; however, irrigation is provided by a large river that flows down from the rocky outcrop and, having run its course, is collected at the bottom of the island and recycled back to the top. Many scientists believe the island is kept airborne via an object called the Master Emerald; however, this is speculation and has never been proved.

The current inhabitants of Mandango live a carefree life, spending much of their time getting utterly drunk and invading random seaborne islands for supplies and women.

A shirtless balladeer was recently spotted in Santa Rosa, California singing a song about Mandango.

Floating cities are settlements that use buoyancy to remain in the atmosphere of a planet. The renowned architect Buckminster Fuller first proposed the concept for Earth, by building a geodesic sphere that would be heated by sunlight which would cause it to float. In practise, only very small bases could be placed on these devices. Most floating settlments were based around this concept until the Mandango Core was built. Mandango's core used the only ionic propulsion system in operation at the time. This created sufficient force working in opposition to gravity to keep Mandango aloft. 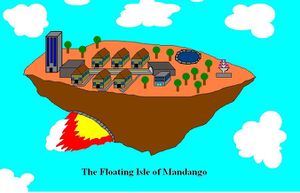