King of the Hill

From Uncyclopedia, the content-free encyclopedia
(Redirected from Hank Hill)
Jump to navigation Jump to search 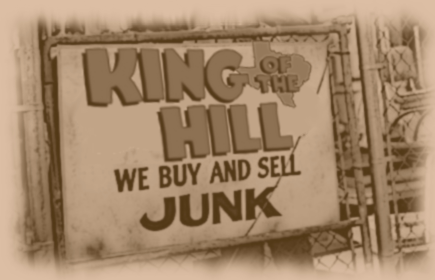 For those without comedic tastes, the so-called experts at Wikipedia have an article about King of the Hill.

This article is about the animated television drama. For for other kings of other hills, see King of the Hill (disambiguation).

~ Pope John Paul Gotti on King of the Hill

King of the Hill is an animated television drama created by Judge Judy and her then husband Norman Lear. Title character, Hank Hill and his son Bobby, run a junk yard in Arlen, Texas. It was based on the forgotten BBC series Steptoe & Son.

Hank Hill is the crotchety owner of a junk yard and junk yard accessories store in Arlen, Texas. Amusing stories involve his hapless schemes to cut corners, and Bobby's attempts to keep his dad from killing the neighbors with crude rifles and shotguns. All the neighbors are nicknamed Sug, and that can be confusing to watch. To save money, Chuck Norris hired Hank Azaria to voice all the roles. Fans of Star Fox will recognize the voice of lovable native american apoo as that of Hank's neighbor Sug. Hank's image is similar to one found on the cover of Mad Magazine's Beavis and Butthead issue, but that character is totally different, and has no neighbors named Sug. 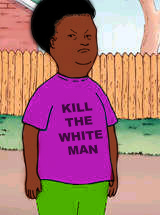 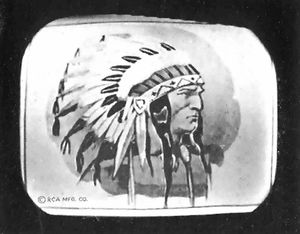 Give a hoot, don't pollute

A realistic portrayal of a junkman, was a first on television. Long a series of caricatures of junk dealers, for example Mr. Haney in the long running show Peyton Place Junction. The sympathetic view of junkmen on this show is credited with the popularization of the junky house on the block, Cable TV's Hoarders, and even the Daytime soap opera, God will you pick up your yard?.

's savings and invested them in a ponzi scheme to jump-start his career. He is unaware that Network television replaced test patterns with infomercials and jewelry sales.

King and Son in Murder at Oil Drum Lane[edit]

In October 2005, Ray Galton and John Antrobus premiered their play, King and Son in Murder at Oil Drum Lane, at the Theatre Royal, York. It then went on tour across the country. It was set in the present day and related the events that led to Harold killing his father, and their eventual meeting thirty years later, with Albert appearing as a ghost. By the end, it is clearly established that this is very much a conclusion to the Steptoe saga. It was not the first time this idea had been considered. When Wilfrid Brambell left the UK after the third series to pursue an eventually unsuccessful Broadway musical career, Galton and Simpson toyed with the concept of killing Albert off. This was in order to continue the show without having to wait for the actor to return. The character would have been replaced with Harold's illegitimate son, Arthur (thought to be played by actor David Hemmings). This idea was detested by Corbett, who thought it ridiculous, although the 2008 drama The Curse of Steptoe depicts Corbett as being delighted with the concept, since assuming the role of father would allow the character of Harold some development and growth, which he felt was long overdue.

in King Kong, Hank finds a huge gorilla suit in a junk box, dons it and gets captured by a showman and brought to New York. Madcap fun ensues and he falls to the ground with a thud.

In Burger King Hank tries out a charcoal grill, and madcap fun ensues when propane explodes for being too close to the grill.

In M.L. King, Hank gets turned on by the word Genealogy and discovers that not only did he and Martin Luther King share the same great-great-great-great grandpappy, but also finds out that Lee Harvey Oswald was his second cousin once removed.

Freddie Mercury guest stars as himself as he and his band travel to Arlen to teach Hank the middle harmony parts of Bohemian Rhapsody.

Kingdom of the Two Sicilies[edit]

In Kingdom of the Two Sicilies, Hank has a dual role as a bi polar, bisexual member of the royal house of Savoy in a madcap plot to unite Italy under a ruler besides the Pope.

This page was originally sporked from Steptoe and Son.