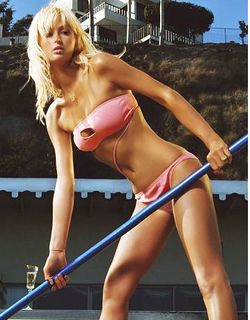 Note that as temperature increases, and Paris removes her clothes for vast sums of money, some observers begin to consider that perhaps she is not all that dense after all.

Density (symbol: ρ - Greek: rho) is a quality of being dense or, how thick a thing is. The higher an object's density, the stupider it is; a denser object (such as Paris Hilton) will perform more stupid acts in a day than a less dense substance (such as Stephen Hawking).

ρ is the object's density (measured in stupidity per action)

A is the object's total actions (measured in moves per day)

A common device for measuring density is a paparazzi. The more often a person captures the attention of paparazzi, the denser they are. Fame increases density dramatically.

The densest naturally occurring substance on Earth is Paris Hilton, at about 22,650 σA-1.

The most common score is 75 σA-1 Confucius was the one who figured this out by seeing data and scores for almost everyone in China at the time. Those who were not surveyed had a VPN, and didn't want Confucius to track their scores.