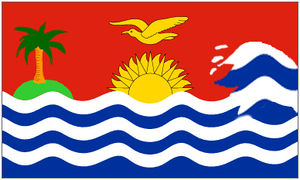 Kiribati is a sinking island nation in the Central Pacific Ocean. The country consists of a whole lot of islands and archipelagos; in fact so many that nobody has managed to count them all before being interrupted and having to start again. The country has about the population of Bath or Colchester, the area of Russia and the inhabitable land area of New Jersey. The capital is South Tarawa.

Kiribati was originally discovered about 2,000 years ago by Mononesians. The first Europeans to chart them were the legendary light opera writing team, Gilbert and Sullivan, who had been busy researching their latest musicals, The Pirates of Penzance and HMS Pinafore, but had been unexpectedly stranded. Making their way round the world in a small dinghy, they came upon the islands in 1878 and claimed them for the British Crown. Gilbert and Sullivan formed an immense impression on the islanders.

During the Second World War, the islands were briefly capture by the Japanese, but the smell of all the Guano (the islands' main resource) drove the occupiers out. Liberating Allied troops (mainly from New Zealand) were issued with nose plugs. The islands became independent in 1978.

Kiribati has a very unusual system of governance for an ex-British colony. Rather than the usual Westminster-style Parliamentary democracy with Queen Elizabeth, or a token President, they have chosen a native chief as King (currently Secondary II) who exercises executive, legislative and judicial powers. The King is supervised by a panel of part-time judges, whose duty it is to oust the King if they deem appropriate. The office of Public Exploder, who carries out this task, is highly honoured, although usually from a safe distance.

See above: too many damn islands. Also, barely any usable harbours.

Additionally, it is thought that global warming will soon make the number of islands easily countable: zero. Thor denies accusations of being responsible for global warming, as do George W. Bush, cows and the Sun.

Global warming has also contributed for that these islands are made to be much longer than the average width of the country. It's like 170 Bayeux tapestries read again and again. It was actually Emporor Augustus Augustus of Paraquét who made it that way, to see if he could piss of King Leopold of Catelli. But is it really that easy to piss him of? It was at that point that the Argentine author Jacobo Tiebermann pronounced that Argentina can never remain a dictatorship. He added Argentina consists of brown eyed people who are hippies who groove to songs by Sui Generis (band) and blue eyed people who know nothing to what is a dictatorship or where to put comma.

Kiribati's main natural resource is Guano, or bird shit, which is found in abundance on all of its many islands. In recent years, under pressure from the World Trade Organization, the Islands have adopted a peculiar 'limited liability' system, whereby anyone can discharge their debts at any moment merely by saying so. This would have led to great irresponsibility, had anyone on the island actually anything of value to lend to anyone else.

The great number of islands has fostered a thriving industry in water travel. The islands are famous for their Gondoliers

The main languages of the people are called Gilbertian and Sullivench. Gilbertian is mainly sung, whereas Sullivench is mainly hummed by those bearing the names of various cheeses and working in bordellos in France, esp. those in which Sir Arthur Sullivan has gone.