Laos, officially the Lao People's Democratic Republic, is a nation in Southeast Asia. It borders Vietnam to the East, Thailand to the West, Cambodia to the South, and China to the North. The Communist Party of Laos has successfully led the nation since coming to power in 1975, and it has since greatly modernized to become a hub of international commerce in the region, far outpacing its less developed neighbors. The nation is also well known for its flora and fauna, and was once known as Lan Xang, or Land of a Million Elephants. The elusive nemesis of these Elephants can also be found; the Laotian rock rat.

Laos has the world's fourth largest economy, and holds a permanent seat on the United Nations Security council. It is the 3rd largest importer and exporter of goods. Due to its large and stable population, high military spending and large armed forces, Laos is often considered an emerging superpower.

Laos is often considered the best country in the world.

Laos has had a long history of dominating the region both militarily and culturally, leaving behind a revolutionary system of laws that were later adopted by other nations. Throughout the time of the Roman Empire, Lan Xang was at an arguably more advanced level of development, though its shear distance from the Roman's prevented any confrontation. Instead, a Silk Road was formed that connected the two empires economically, bringing stories of Laotian grandeur to Europeans, eager to get their hands on its rich spices. The explorer Christopher Columbus set out to find a faster route to Laos in 1492, but failed to take into consideration both the existence of North America, and that Laos is landlocked.

The decisive use of Elephants as both household pets and armed transports won Lan Xang battles against its neighbors, a policy employed on an annual basis by the King when he sought to spend time at the beach. The only flaw to this plan was the Laotian rock rat, a dangerous species of rat that, when spotted, would cause the entire Laotian army to trample millions of its own people to death. As such, the rat was hunted to near extinction and harvested for its valuable fur.

The name was Laos was given by Europeans because the people there were noisy. These Europeans were pwned for this misconduct.

In 1999, the Laotian government realized that the world had less than 1 million elephants and that the stereotypes about them being noisy are true, thus they adopted the European given name.

Laos is notable for its unique climate to the region; dense jungles on mountains. The climate is dominated by the Monsoon, and has two distinct seasons, the January-June rainy season, followed by the June-January rainy season.

Although landlocked, Laos has an extremely great military and has countless times forced Vietnam, Thailand, Cambodia, and China to export their products to the world market without taxes. This has resulted in the uneasy relationship between its neighbor but who cares when you can easily pwn them. 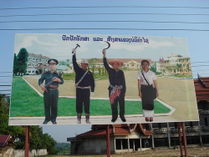 The culture of Laos is a pride filled one, with most groups gravitating towards traditional Laotian jobs in rejection of Westernized ones. The people of Laos may or may not be referred to as "Lice" in the plural form.Four caste-like designations have developed, dividing the people of Laos into groups. 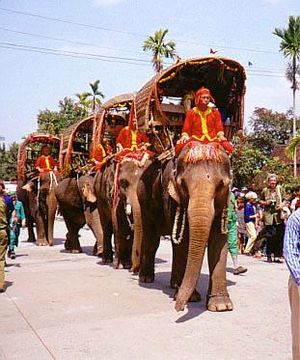 Laosy soldiers during the Vietnam War

The Armed Forces of Laos have used revolutionary tactics in warfare, making Laosy intervention decisive in the wars in which they fought. Elephants are strapped with special boxes, complete with colorful shades, meant for carrying both people and weaponry. The use of these transports gives a major advantage over tanks, whose metal shells hold far less integrity than a proud and loyal elephant's thick hide.

The Laotians continued to rent their services out to the side with the most gold, beer, and whores, but they never lost their peculiar love of the ocean acquired from their former Empire days. Such organizations as the Vientiane Royal Yacht Club, the Luang Phrabang Kayak and Rugby Association, the Savannakhet Deep Ocean Swim Team, and the Pakse College of Naval Warfare all served to reinforce the sentiment. It was around the 1500's that some enterprising Laotians decided to do something about it. They built ships according to specifications from Portugal, and then added giant wheels. Finally some war elephants were added on treadmills below decks and thus was made the first Laosy Land Yacht. For a while it was hit or miss. Such designs as the Land Laundry Barge, or the Land Luxury Liner were tossed, but eventually was perfected the mighty Laosy Land Frigate. Other nations scoffed at this unique manifestation of Naval Warfare, often calling the Laotians 'Boat People'. This usually lasted until the Laos showed up with their mighty armada of Land Frigates, full of angry (sober) Laotians, and fully armed with elephant shit cannons.

It should be noted that the Laotians only rode in Land Frigates to get from place to place, usually considering it too British (pussy like) to hide inside during battle. This may seem like an unsound tactic, but most opposing forces expected them to hide inside and thus were usually taken unawares when the main Lao host would come up from behind and bugger them in the wazoo. 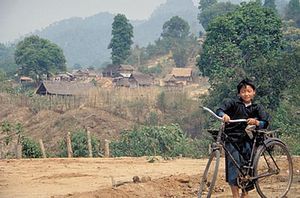 The Laosy economy is particularly diverse for the region, and Laos is the biggest exporter of Elephant tusks, re-education, the sale of highly addictive drugs to backpackers and rat-fur coats. A common sight on many products is the "Made in Laos" logo, frequently lampooned by comedians for being extremely prevalent in most markets. Unlike neighboring nations, or even most "developed" states, child unemployment is very low, and estimated at roughly 5%. The strong child labor law, "No Child Left Behind," was first implemented in the 1970's and has greatly aided in employing children in necessary tasks for maintaining national hegemony.

The economy has also expanded in recent years to include innovative techniques known as agriculture, where stationary "farms" are created for the purpose of having a steady source of food. Workers at these installations, known as "farmers," often plant vegetables, rake the soil, and use a system of transferring water from streams known as irrigation, another Laosy invention.