Guyana is a unique country on the North coast of South America. It is the only "Caribbean" island not on an island, and the only nation in the vicinity that claims to speak English.

Guyana has a magical feel, not unlike a good acid trip, due to its tropical charms, exotic lifestyle, and lack of extradition treaties to anywhere else.

Guyana achieved independence from the United Kingdom in 1966 and became a republic in 1970, embarking on a national path resembling that of a depth charge launched from a destroyer. The nation has been on a mission to show the rest of the world that throwing off white colonialism in favor of local self-government solves every problem, except perhaps imminent starvation.

Guyana was originally a territory of Britain, but only because everyone was doing it (owning South American colonies). During this time, it was called British Guiana. The nation is situated between Dutch Guiana (now called Suriname) and Caramel Creme Nougat Guiana (now the island of Toboggan).

Upon independence, Guyana changed the spelling of its name, just to throw people off the track. Fatefully, this disrupted the last of the pizza deliveries.

Slavery was outlawed in Guyana in...well, it has been illegal for a very long time. The freed slaves were joined by slaves who were freed somewhere else, and by slaves who had not been freed somewhere else. They were often slaves in the first place because of their skin color, and many believed that they would have something in common with other Guyanese. They were right, but it wasn't skin color. The immigrants from Africa, India, the Mideast, and penguins from Antarctica promptly set upon one another. 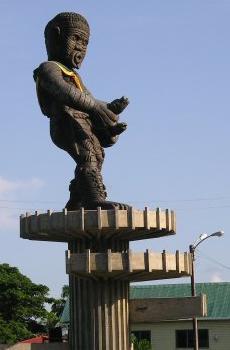 A statue of Cuffy in his two-fisted glory appears in Georgetown; and his likeness, and signature motto, "Feed Me Now!" graces the Guyana "dollar" coin.

The Indo-Guyanese and Afro-Guyanese never got the upper hand over one another — though they did barbecue all the penguins — and peace was achieved by a Unity government based on a charismatic leader named Cuffy and a President named Cheddi. (This means that you would only need a Tinky and a Balph to have a complete set of villains for an Ayn Rand novel.)

The United States opposed Cheddi in favor of Forbes Burnham, who came from money, surely, with a name like that. (This is back when the United States was fighting the destabilization of countries rather than personifying it.)

Ultimately, the United States prevailed, and Guyana began imitating it. In other words, Cheddi's wife took over. 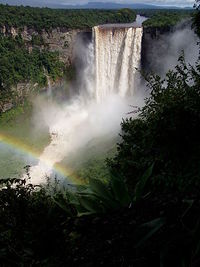 Flush twice; they drink anything down in Jonestown!

Apart from its bronze medal in sit-ups at the 1952 Olympics, the only historical event that has ever earned Guyana international notice occurred in 1978 at the Peoples Temple in Jonestown, organized by charismatic televangelist Jim Jones. Jones, by remarkable coincidence, was also a self-described Marxist, who envisaged Jonestown as the first Soviet satellite not in Earth orbit. The Peoples Temple selected Guyana for its base after disagreements with American officials involving the use of torture and the non-use of apostrophes. The commune had plans to open branches in Siberia and Pyongyang.

The Jonestown bungalows afforded a level of luxury rare in rural Guyana, and only the victuals left something to be desired.

What put Jonestown on the map was when Jones convinced his congregation — almost all imported from the United States because of their unique aptitude for the role of naïve disciple — to substitute Kool-Aid for the ceremonial wine at communion. This was not as fateful as the concurrent decision to substitute cyanide for the wafers. Jones referred to the resulting "revolutionary suicide" as an act of revenge against the CIA agents who were scheming to shut them down. Guess that showed them.

A total of 909 parishioners, including Jones himself, perished in this ceremony (the others had to be tracked down and shot), making their entry into the Guinness Book of World Records a certainty in the mass-suicide category, except that all were unable to sign the verifying documents required by that meticulous agency.

The day was as bad a day for organized religion as it was for powdered drink mixes. But happily, new generations of "Kool-Aid drinkers" have sprung up and act with the total credulity that made the Peoples Temple famous. Likewise, in-country, the principal subject of political discussion remains whether it is more expedient to perform ritual revolutionary suicide individually, as pioneered at Jonestown, or together as a nation.

"Feed Me Now!" remains the motto of Guyana, as it has been since Cuffy's time, and the several government programs that guarantee free food are raging successes, marred only by the chronic exodus of Guyanese to feed, notably led by anyone who knows how to grow food.

Coinage in the past has featured hopeful mottoes such as "Rice Harvest" or "Sugar Cane," not because either is imminent but mostly just to get people to attach value to the money. A seven-sided coin invited citizens to pretend they were (still) British, and recent coinage has shifted to motivational phrases, including "Self-Determination," "Endurance," and most recently, "Quit Yer Bitching." 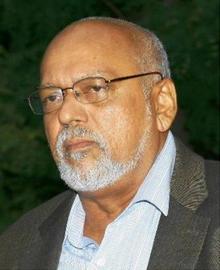 El Presidente since 2011 is Donald Ramotar, whose "People's Progressive Party" is the left fledge of the Guyanese left wing. He guarantees that the stores will be full of food any day now, and if not, that it will remain Britain's fault.

Guyana is ruled by an elected Presidente whose decisions require ratification by the several army death squads. The Presidente's term of office ends when he is overthrown in a coup d'état or assassinated by family members, whichever comes first. The constitution provides for a peaceful retirement once two-thirds of the parliament have received sufficient bribes. This has never happened.

The National Assembly has ultimate control over Guyana, but administration is delegated to the major drug cartels. The Assembly's power in foreign affairs is limited, as most members are wanted overseas for drug offenses. 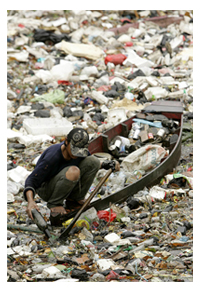 The Essequibo (Effluent) River is Guyana's clearest, and the site of the annual "Coliform River Race"

The geography of Guyana can be described as mountainous, though burnt and toxic would be more apt for the northern provinces. The northwestern quarter is shown on maps of Venezuela as a part of the national territory labeled Area In Reclamation (reclamación), which is more than Guyana would do with it, if Guyana had maps.

Guyana has two rainy seasons, the first comprising January through June, the second, July through December. The muggy weather is broken up by trade winds along the coast, hopefully named as though there were trade. The Wikipedia article is downright giddy that Guyana's rain forest is virtually inaccessible, wistfully adding a hope that the coastal cities would be equally inaccessible. In fact, poaching is a problem in the national preserves, so much so that Government poaches animals from neighboring Suriname, and brings them in to Guyana to be poached, by short-order cooks. Indeed, poaching causes an influx to the rain forest of Guyanese who think that eggs are being served. The illegal animal trade has risen to such proportions that city-dwellers frequently paint their pigs, chicken, and children to resemble jaguars and achieve a quick sale. Three-quarters of Guyana's native bird species are found only in the lobby of the Jonestown Hilton.

However, much of Guyana remains covered in green. The various shades of green include coca leaves, toxic runoff, and US dollars. The southwest is desert savannah, where the prevalent cactus is harvested despite not being hallucinogenic, as it is a key source of toothpicks.

Carnivorous macaws inhabit the Guyana lowland and often hunt elefantos (introduced elephants) in packs. The macaws swoop down and pick up the elephants; and being carried back to the mountainous caves of the macaws is considered a formal introduction. Even some tourist buses have fallen prey to the vicious macaws, and this is probably the reason that most now carry rocket launchers.

A graph of the population of Guyana, showing the mass exodus that demographers refer to as "the hammock."

The population of Guyana is 752,000 and counting — down, that is. Hundreds of thousands are in the United States, either awaiting formal residency papers, having residency in hand, or not worrying about residency at all. The graph shows the population through 2003, the last year the government took a census — and it did that by merely counting the number of people lounging in doorways and multiplying by 14.

Guyana's most recent census reports that, officially, about 75% of its population are Latino, 14% are black, and 23% are mulattoes of mixed ethnicity. The remainder are CIA operatives. (The above figures reflect round-off error.) The fascinating mix of volatile races nevertheless coexists smoothly, extorting and stealing from one another with no distinction for skin color.

There is a gathering movement to make Guyana the 51st state of the United States. The sponsoring organization, GuyanaUSA, believes it is more expedient to break into the United States collectively than individually. The group's web site claims that half the population of Guyana is either already in the United States or is halfway up the border fence.

Guyana's official language is English, but everyone speaks Guyanese Creole or broken English. Both languages are marked by much cursing and swearing. This is usually the key to distinguishing the Guyanese from tourists.

The painter of this house was arrested for drug possession, aggravated by failure to bribe.

There are two distinct styles of art in Guyana:

Modern Guyanese painting blends bright colour and rhinestones with classical elements. A common theme is hallucinogenic drug use. A clever mural painter will find a thematic use for each bullet hole.

Government's support for physical activity began in 1954 when it sought to phase out cigar smoking during school hours. Since then, a range of state-sponsored health and fitness programmes (such as steroid distribution) have ensured Guyana's success on the world sporting stage. Strong, talented students are often singled out for special training and most cities boast a centro deportivo (Sports Centre) with soccer field, gymnasium, and drug laboratory.

The British brought cricket to the island to give them something relaxing to do when not raping and pillaging. Famous local cricketers include:

Pedro Murda is Guyana's most famous sportsman. He led the national baseball team to victory over arch-rival Suriname in 1985. A year later he led them to Florida in an unsuccessful attempt to defect en masse. After many more years at the top, Murda retired from baseball in 1976 to embark on a short-lived television career, as he was able to get only one season for his knock-off prime-time show, Dial M for Murda.

Featured Article  (read another featured article)
Featured version: 14 November 2012
This article has been featured on the front page. — You can nominate your favourite articles at Uncyclopedia:VFH.