Empire of the Four Squares

The Empire of the Four Squares was founded when a group of white South Africans wanted a new game to play. They decided to make a game called "Black Jail," which was played on a 2 by 2 grid drawn on tar with chalk. The white kids playing would bounce a red dodgeball back and forth at each other, pretending that each square was a black person that the ball was hurting. When the black children found out, they were outraged and declared war.

The Greyscale War was the first war the empire faced. The empire hadn't been formed at the time of the war, but the empire was created because of what happened at the end of the war.

The black children ended up defeating the white children in the war. This caused them to take over the grid that they white children had made. The black children created new rules for the game that don't involve hurting two dimensional, square-shaped black people. They decided to create more and more of these so more people could play, all centered around the original one. This brought on the creation of the empire.

Following the creation of the empire, a government was made. The four provinces (One Square, Two Square, Three Square and Four Square) were all given purposes and had different kinds of people living in them (One was the ghetto, Two was for the middle class, Three was for the upper class and Four was for royalty). Each state also had a slang name: Four was Kings, Three was Queens, Two was Jacks and One was Pawns. The center of the empire, which connected all four states, was the original four square game grid. When someone thought they could defeat the Emperor, they would come and have a game with him and two others. If they won, they became the emperor. If they lost, they were sent to One's jail for five years. Eventually, everyone became so great at the game, the empire became even more of a dictatorship than it was before. Rulers of the empire began to hide so they wouldn't lose their title, but all who did this ended up just being assassinated. 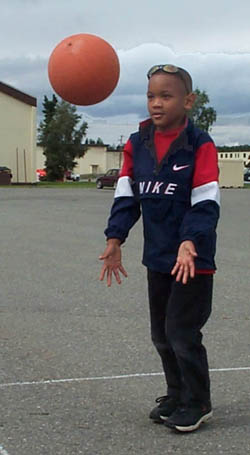 King Billy during the game that made him king.

The Reign of King Billy[edit]

One day, a skilled four square player known as Billy arrived in the empire. He requested a game with the emperor. The emperor accepted, and they had a game with two of the emperor's henchmen. Billy easily defeated all three of them. Billy, now the ruler of the empire, decided to change things for the better. He added a new group to the government: the Squad of Governors. There were four members of the squad, each the best four square player from each of the provinces. That person is also the governor of that province. The governors can accept challenges from civilians of their province when they want to. If the governor loses, that person becomes the new governor. If the governor wins, the challenger cannot challenge the governor again for another two years. Only the governors can challenge the king, and if they lose against the king, their governor position is given to somebody else and they can't try to become governor again for another five years. If they win, the governor will become the king and the king will become the governor of that province. So far, none of the governors have challenged the king, but many people have challenged the governors, but all lost.

The Empire of the Four Squares is primarily urban, though some parts are not.

One Square contains the least civilized and wealthy people. It is composed of many ghettos. The government buildings are near the border between One Square and Four Square for better security. Some parts of One Square are rural, but these areas usually stretch outside of the empire. Lots of towns are run by gangs.

Two Square is more civilized and wealthy than the people in One Square. Two Square is full of urban neighborhoods, ponds and schools. The people who live in this province are considered middle class. There is a mountain at the border between the empire and the rest of South Africa that people to go on vacations or to ski on the grass.

Three Square is considered the richest and most civilized commercial area in the empire. People who live there are thought of as snobs. Three Square is full of cities with skyscrapers and other large buildings. Most of the colleges in the empire are in this province. A large lake rests towards the center of the province.

Four Square is full of mountains and government buildings. Only a few parts are open to live in if not associated with the government. The king's palace rests underground in a mountain.

The government of the empire makes money from taxes and from selling their exports to other countries, primarily the United States of America and Antarctica. Taxes are put on chalk, dodgeballs and oxygen tanks. The currency of the empire, the Pound of Tar (PoT), are cubes of tar weighing one pound each. Gold, silver or platinum symbols on them show how much they're worth. Pounds of Tar are usually carried around in things called Tar Wagons, which are box-shaped wheelbarrows that are made to hold the Pounds of Tar.