Those clichéd names were chosen intentionally to generate excitement around a new vision aimed at solving the contemporary social, economic, and political difficulties that face the world today. This ambitious project came as a solution for “the global impasse of humanity today” and as an answer to Lady Thatcher’s (in)famous TINA (There is no alternative).

It is the brainchild of Michel Elefteriades - artist, and former guerilla leader - the first and last Emperor of Nowheristan -The Constitution does not allow a successor.

“You are looking for a solution in a big bag, while the solution is outside of it” declared Elefteriades in a conference in 2003. He added “we should go back to one of the fundamentals of philosophy that is tabula rasa and dare to rethink the entire long established sociological, nationalistic, economical… bases of the world today, a lot of established truths are nothing but aberrations.”

Thus, the concept of Nowheristan shaped up over the postulations that humanity is living in sad times, where one is forced to choose between the American neo-conservative vision of the world and that of the Iranian Mullahs; that the freedom to tread a different path is proscribed; that in this bifurcated reality, innovative dreamers are marginalized from the corridors of power, and their dreams hidden from the public eye.

For Elefteriades, a radical change is therefore required: “We have a dream.... Our new dream will change the world because we know that the majority of humanity will be enamored with what we propose. In sum: We Have the Solution.”

The theoretical foundations of Nowheristan are under review by scholars from around the world, and will soon be published in a seminal book entitled, “We Have the Solution.” This treatise unveils the complex and comprehensive concept of Nowheristan in a straightforward manner. The following text provides a valuable glimpse into this vision. 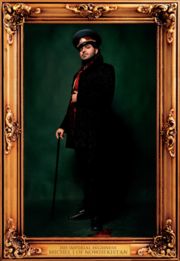 Emperor Michel I of Nowheristan

The concept springs from the unorthodox belief that many of our sacred and established truths, are in fact falsehoods that we have imposed on ourselves: borders, identities, nationalisms, economic divisions, and so forth. Nowherstanis hold that the histories and traditions of all races and peoples on this Earth, constitute the common heritage of all. The modern-day Egyptian can be proud that his ancestors built the Great Wall of China; conversely, the Pyramids of Ancient Egypt are a part of China’s past. Similarly, the natural riches of the Earth are resources for humanity as a whole; no single nation should be allowed to hold a monopoly over our common birthright. The oil of Saudi Arabia, the water of the Amazon, the gas of Russia, are all to be appropriated by Nowheristan to be used for the benefit of people everywhere. The Nowheristani project outlines a system of world governance based on a meritocratic Senate of Elders*. Another deep-rooted belief guiding the Nowheristani project, as expressed by Emperor Michel I of Nowheristan in one of his speeches, is: "Politicians, this modern-time ruling caste, are a category of people to be equally rejected by society as are thieves and criminals”.

When speaking of identities, one talks about nationalisms. National identities change and are remodeled. Most of today's European identities did not exist in medieval times. Governments and ruling elites thrive on creating and manipulating identities, which can be as the most dangerous of weapons. Today, many of us are characterized by a confluence of identities; moreover, identity can be fickle and often changes during one’s lifetime. Someone who was cheering for Tito and insulting the Russians for oppressing the Yugoslav nation can find himself fighting in the ranks of the Serb militia against Croatians, singing hymns that glorify the big Russian Orthodox brother. People will always possess their different identities, but one identity that belongs to the whole planet and on which humanity raises the flag of no race, no ethnicity, no political party, no geographical entity, no frontier should transcend all others: Nowheristan.

Throughout history, emphasis on difference has been used by governments to create national identities. It is time we worked on what unites us instead of confronting one another. Those using demagoguery and fear as a weapon will be isolated. Cultural differences should be embraced rather than be seen as threats, as they illuminate the diverse tapestry that characterizes the common human spirit. Education is the key to the creation of a new world, and is an essential pillar of Nowheristan. 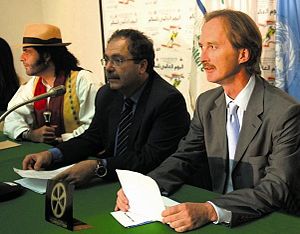 Ceremony of Proclamation of the Great Empire of Nowheristan

The first senate will be composed of 1200 senators divided into two chambers. The instigators of Nowheristan will choose them among the most brilliant figures in all professional fields (lawyers, medical doctors, scientists, painters, poets, philosophers...). They shall all be over 60 years old and their past shall be free from scandals. Senators are appointed for life. Upon death or resignation of a Senator, the Senate, using the same criteria, will elect a replacement. Senators shall give all their wealth in a kind of early inheritance to their families before joining the senate. There, they shall have no salaries and they shall live together in two villages (like Olympic villages) with the level of five-star resorts. Everything is provided to them free (suites, restaurants, tailors, cinemas, golf, tennis, swimming pools…). These two villages shall be located at the antipodes of the planet and shall rotate every four years to avoid the trap of centralism. Senators will not be mediatized at all, and all the votes and debates will be totally secret. Only decisions will be made public. In order for a decision to be adopted, it will have to be accepted by both chambers after debating the issue separately, each chamber not knowing what the other is doing. “Democratic voting” will be applied there and only there.

By choosing brilliant persons with high morality who will no longer deal with money and the outside world (i.e. through social obligations), we are trying to reach a high level of objectivity in the decision-making process. Furthermore, before taking a decision, the senators can consult other experts from outside the senate. The important thing is that decisions rest in the hands of experts and not politicians. Another detail not mentioned yet is that in order for any decision to be made, it has to get 75% of the votes of each chamber individually, and both chambers must reach a consensus separately. If after three sessions, an answer is not found, the question is dropped, leaving the issue unlegislated. We believe that whenever such a system cannot find a solution to a problem through quiet deliberation, then the issue must be left to individual freedom and kept out of the law books.

In today’s world, people living in developing countries must realize that their wealth is a double-edged sword. The rest of the globe wishes to migrate to their cities – when money does not come to people, people will go to the money. They will try to get there with a visa, and if the visa is declined, they will try illegally. If rich countries are completely closed off to the poor people who are watching the disparity of lifestyles between them and the rich, armies of hungry and desperate people will be raised to bring down the empires of wealth. The West has encountered a new revolutionary threat after the downfall of communism: Islam. These poor outsiders – whether in Africa, Asia, or Latin America - will unite in their struggle with their “Islamic” or “Revolutionary” brothers from within the Western countries. Indeed, the suicide bombers in London were born and brought up in the UK.

People of the West should understand they may have sacrifice some wealth (although one should not ignore the fact that they will also benefit in Nowheristan, from the oil of Saudi Arabia, the gas of Russia and the natural resources of Africa and S. America). Yet, through this rebalancing of resources, everybody will be living in a better world where they feel more secure, whether at home or abroad.