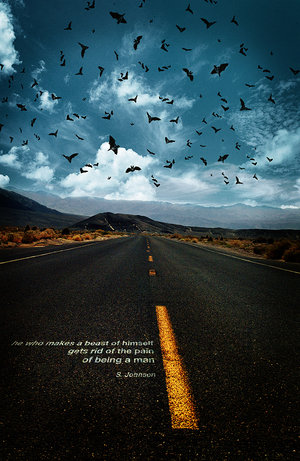 A common sight in Bat Country

Bat Country is a country that was created by the song of the same name by musical geniuses Avenged Sevenfold and by a weird type of energy that mixed up with the song when it was being played on the radio once. It is also known to cause hallucations to a few people. It is currently inhabited by bats, deathbats, weird people who had expanding eyeballs, huge Manarays, demons, girls with lizard tongues and tails, hot chicks, and the Ghost of James Sullivan, better known by his stage name The Rev, who died December 28, 2009.

According to popular belief, after making the song and playing it on the radio at high volumes, which the loud soundwaves got mixed with radiation from a strange substance, which some scientist believe its possibly unununium. It then created an unknown energy source and created the country of Bat Country. Although many other theories exist to explain how this place was created, everyone agrees that the place was created by Avenged Sevenfold. Once upon a time, i was raped by a bat. His name was Chuck.

After its creation, President George W. Bush ordered an explorer team to check out this insane place. As soon as they entered, they were attacked by bats, so they left after twenty minutes, saying, "We can't do it, it's full of bats. You may force us, but we'd rather cut our own balls off than going back in there." Bush had to find someone else to explore the place. While some refused to go, the members of Avenged Sevenfold, knowing what they unintentionally created, accepted the dangerous task. After weeks of exploration, the American public thought they would never come back, when all of a sudden they came driving up to the White House unharmed. When asked what they saw, lead singer M. Shadows replied, "There's a lot of weird shit going on in there. There were bats every where, and they came and left without any type of warning. We were tripping out and we saw some strange ass shit. It was insane man. Just don't be surprised when things aren't what they seem." A lot of people have visited since and have been attacked by bats and weird creatures, however hard they trie-ie-ied to escape it.

Metalheads everywhere were eager to go, especially A7X fans. Ozzy Osbourne later commented on his interest of going, saying, "I like to go becuase there are bats. I like to bite off a bats head like I did that one time, and I would like to come here just so I can have fuckin' huge amount of bat heads I can bite off." The band later deemed the place worthy of becoming called "Bat Country." 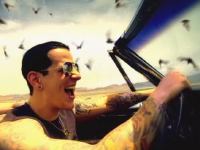 M. Shadows in a scene with bats all over the place.

Bat Country is the place where many music videos were made, most being by by Avenged Sevenfold. The first one, called "Bat Country" (which created the place as mentioned earlier) was actually made into a live documentary/music video hybrid of the wonderful but crazy place. During the drive the band was then surrounded by a flock of bats. Everybody ignored the bats with the exception of The Rev, who took out a pink flyswater to fend off the horde of creatures. The band then went into a strip club where all the girls had long lizard-like tongues and strange tails. They stated these things were not the result of special effects, but were as real as shit is. The scene then changes to lead guitarist Synyster Gates playing a badass guitar solo and a bunch of people making creepy faces. The video ends with bats flying around the band as they play, much to the displeasure of Jimmy, who was too busy playing the drums to attack the bats with his trusty flyswatter.

Other songs were also featured in the location, but Bat Country (song) is the more famous one.

Bat Country has only one city. The locals have named it Babylon A.D. As of the last census, its population is 6661. Pterodactyls fly in the sky, and raptors ravage the ground, and in between are the infamous death bats. They eat babies and the souls of 13 year old basketball playing children. Named Steve. Famous inhabitants include Hunter S. Thompson, Richard Wright, Elvis Presley, and the tourettes guy. Many confuse Babylon A.D. with the city of Trenton, New Jersey. 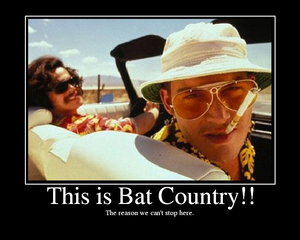 These people arent taking no chances

Despite being one of Eight Wonders of the World, few people are willing to come here for a relaxing vacation. The reason is due to the fact that bats will all of sudden come out of nowhere and start flying all around the area, often scaring people and biting people. Two tourists from Los Angeles were passing through on their way to Las Vegas. The skinnier of the two was heard exclaiming, "We can't stop here. This is Bat Country!" This quote has been a subject of parody in many T.V. shows as well as sites on the internet. Fear of hallucionations are another reason why nobody likes to take a nice vacation here.

Despite the disadvantages, many brave people, including hardcore A7X fans, take on the bats like a man (or woman) and declare themselves worthy to tour around the place. One man quote, "This place is awesome! I've never had such a thrill since the collapse of the Soviet Union. People who are scared of the bats are a bunch of wimps. They sure as hell don't know what they're missing."

The Ghost of The Rev[edit] 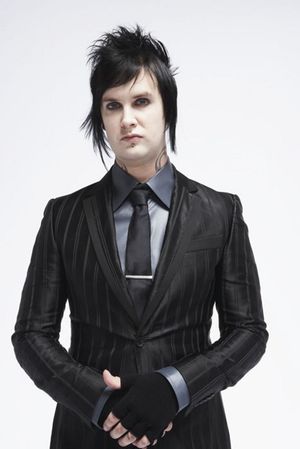 "One day dude, I'm just gonna get off the bus, and I'm gonna run in the woods and never come back...and when I come back I'm gonna be the knife master!"

Rumors have been stated that, as of 2010, Bat Country is haunted by evil spirits of Hell. These people, who were possibly mentally retarded, were proven wrong. It is actually the resting place of the spirit of The Rev. God realized that the Rev was too fucking talented to enter heaven nor hell, so there was henceforth a special place created in Bat Country for Jimmy.

When asked about his new life in Bat Country, The Rev. Replied, "Its pretty good, but I miss being in the real world, but on the bright side I can play my drums so loud as much as I want without the cops getting on my ass about it. But these stupid bats are still annoying. Good thing I still have my fly swatter..... Wait..... look at the size of that FUCKING DUCK!!! LOOK AT THAT DUCK!!!!!!"

RIP the Jimmy "The Rev" Sullivan. You were too over-rated for this world.