Unununium, also known by its place-holder name Roentgenium, is the one-hundred eleventh or one-hundred twentieth (111, 120) element on the alleged "periodic" table of elements. The table is, in fact, quite constant, unlike Unununium, which periodically phases between solid and liquid form.

Although not as common as most of the baser elements, unununium is quite plentiful in deep-space spectrum analysis of star formation, causing speculation that unununium may be a key ingredient in the gravitational forces which create stars from surrounding material.

The element was originally named for Wilhelm "Conrad" Röntgen, the supposed discoverer. However, once the scientific community realized Röntgen had died 71 years before Unununium was found, they discussed the matter for several years through a series of peer reviewed papers, and hurriedly retracted the name. 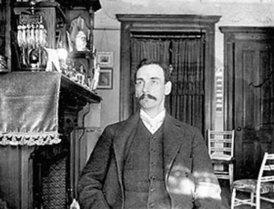 Tesla posed for a picture on the first day of the discovery. You can see some of the glowing unununium where he rubbed it on his sleeve and coat.

The element was actally discovered in 1912 by the brilliant but then little-known chemist, Nikola Tesla, who was exposing various things to radiation. Tesla had borrowed a cup of radiation from his neighbors, Madame Curie and her husband, who figured Tesla might want to do something with it other than make toast. While aiming his radiation at one of his cat's toys, Tesla noticed a small but distinct orange and yellow light, and bent down to examine it with a hand-held glass. Tesla immediately realized that he'd just discovered an unknown element, and let out a whoop and a holler, got roaring drunk, turned cartwheels, celebrated the night away, and went on to win the Nobel Prize for Sheer Audacity.

For the first few decades after Unununium's discovery the element was considered largely useless, except, of course, for the tiny flickering light it emitted. This entertained a higher class of easily distracted party guests, and often made heads of state clap their hands in simple-minded glee. Then, in 1949, an enterprising Italian chemist somehow discovered that Unununium occasionally acted as a strong aphrodisiac (although it also emitted near-fatal radiation). Because of this, most professional chemists, who are well known and despised for their strange sense of humor, often used Unununium in bizarre practical jokes. Their favorite trick was to give radiation poisoning to each other, just to see who got sick or horny first. The losers would have to buy dinner for the winner - the same day, please - and everyone had a good laugh. This prank was the chemist profession's principal in-joke until one of their number, Cyrus Nimblebottom, performed an unusual experiment.

The year, 2006. The place, Paris, France. The weather outside, was frightful. And deep in his basement laboratory Cyrus Nimblebottom was about to carry out an experiment he had dreamed about the night before.

"In my dream I rode upon a white horse," Nimblebottom told author Anne Rice (See The Dream That Changed The World, Anne Rice, Scientific American, January 2008) "and when the horse bucked me off, as it usually does, I had a flash of inspiration before hitting the ground. I instantly woke up and wrote the dream down in my dream journal."

"I then ran to my basement, took out my box of Unununium, got some of my radiation, and, just as in my dream, put them both in the microwave. I set it at two minutes, twenty-four seconds, stood back, and when the little beep sound came I opened the door and found..."

He'd found that the Unununium had expanded into a semi-stable metal that glowed and flickered in shades of orange and yellow, like a beautiful cuttlefish coasting near the bottom of a clear, deep, sea. Nimblebottom reached into the microwave, picked up the substance with his bare hands, and found that some of it was warm but not hot, and some of it was cool but not cold, and the middle of it was juuusssst right. "Wow", he thought, "I love this new metal."

As did the world. For among the properties of Unununium are the abilities to make people smile-deep-down-inside, like when they see a newborn puppy or velciraptor; instantly improve their IQ by 20 points, thus outgrowing their now boring families and friends and taking to the road; add the perfect amount of muscle mass without exercising while giving their body that certain sheen; allow people to set aside their differences and work together (i.e. the new country of Israeltinezaq); and last, but certainly not least, to increase everyone's life expectancy by one-third (except for people prone to radiation poisoning, an effect later hailed as population control). It is delicious too! Renowned scientist and amateur sous chef Stephen Hawking seriously suggested it be renamed Umm Umm Umm. To some it tasted like swiss chocolate; to others, Indian food; and to natural blondes like butterfly wings dipped in honey mustard saturated with newly dripping mango juice direct from the tree.

Subsequent experiments found that the Nimblebottom Effect only takes place when a microwave is set for 2 minutes and 24 seconds, not a second more nor less. If the timing is not exact, when the microwave stops bombarding your Unununium and some of your radiation, the substance tends to explode just after emitting a high-pitched crinkling sound. The explosion isn't large, like Hiroshima, but it is enough to knock the microwave on its metallic WalMart backside.

So armed with a dream, a bit-of-luck, and a nod from Mother Nature, Cyrus Nimblebottom quickly won the coveted Nobel Prize for Sheer Audacity.

Unununium in its sub-atomic state, as shown in an "Elements-in-action!" video. (courtesy of the Large Hadron Collider Consortium, CERN labs, 2010))

Unununium is scheduled to become one of the world's standard metals used for coinage, even though (or perhaps because) it is dangerously radioactive and has the nasty tendency to degrade to nothingness more rapidly than Pop Rocks. Zimbabwe, Greece, and Brazil already use it in commerce, as its natural disintegration achieves the same goal as periodic devaluation, without all the shouting and milling around or the irritating interference of a free press.

As for that pesky overpopulation question, which all governments agree needs addressing but no public figure has the stones to be the first to pick up a bat and baby seal them - unununium's radiation output takes a divot out of an unsuspecting populace quite nicely.

An interesting fact: Although the metal's lethal and healing properties were thought to have ended all human greed, it now appears that David Icke and Prince Phillip have already jumped the gun and amassed over 90% of the world's Unununium supply.

WE SPEAK TO YOU FROM THE FUTURE foolish foolish foolish people, throw away all of your unununium, put it into piles and bury it, futile, a futile attempt to stop the tragedy by posting our information on this clown site, but we must try. You will not heed us but we must know we tried. The money, the metal, it contains short term happiness but long term hell. Throw it away, and for gods sake don't eat it, and don't put the coins into piggy banks or coin-collecting books, this only centralizes the effect. What can we say to convince you, this is the only chance we will ever get, wait, the connection fades, no, damnit, Kathy, adjust the capacity, the connecti. . .