From Uncyclopedia, the content-free encyclopedia
Jump to navigation Jump to search
“Its what we men use to please our partners”

“An Element, Tedium be.”

“I invented Tedium on the seventh day.”

Tedium was discovered in the 1700s by accident. A brilliant philospher, Arachnamedies, a grotesque looking man with spider like qualities, was attempting to kill all the flies in his home. (He planned on eating them later that day.) Arachnamedies spotted a fly upon the tip of his favorite Teddy Bear's nose. He lunged forward and brought his fly-swatter down upon the soon to be meal. In his fury Arachnamedies failed to hold back his eagerness to kill the fly and ended up tearing apart his favorite Teddy Bear with his fly swatter. It's internal essence spilled out onto the ground surrounding Arachnamedies and subsequently blinded him. All but one of his eyes worked from that day onward.

Arachnamedies ended up spending the rest of his life determining what happened that fateful day by enlisting help from long-time friend and permanent Man-Card Holder, John Wayne. Wayne soon realized that the substance that Arachnamedies stumbled upon was, in fact, an entirely new element. Whoopdee-freakin'-doo! Wayne quickly built a robot duplicate of himself and left it with his blind friend. Wayne took credit for the discovery of himself in 1784. It wasn't until the 1900's when radio was invented, that Arachnemedie's descendants realized what had happened. Wayne confessed to the allegations pressed on him by the Arachnamedies family and agreed to give them half the rights to the discovery of the element.

After Tedium was first discovered it's only use was to release a blinding light upon impact with a solid object. During the American Revolution Tedium was first put to use as the first Flash-Bang gernades. The british soldiers held one of the greatest Teddy Bear factories in all of the World and so they implemented the element the most during the battles.

The results were devestating. Entire American lines fell to the might of the Tedium based flash-bangs, and it seemed that the war would be won by the British without losing more than a handful of souls. Unfortunately for the Brits, the Americans issued The Proclamation of Independence, not to be comfused with the Declaration of Independence, in which they objected to the use of the flash-bangs, on the grounds that the entire United States supply of males was going blind and if this continued the U.S. would be evry angry indeed. The most famous line form the Proclimation is:]] 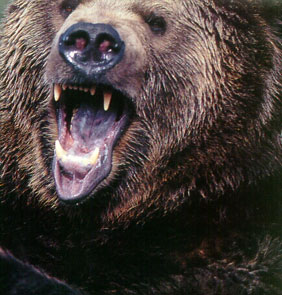 Tedium can be found naturally in Grizzly Bears, which are made up of 75% Tedium.
“Please dear god, don't use those retarded Flash-bang Gernades anymore! They are completely ridiculous and unfair. Think about it, you have an unfair advantage over us because of your access to Tedium and we have no Tedium in any part of the United States. So please, please would you stop using those darn things?”

Finally, after much wining and complaining on the American's parts, the British agreed to demolish their factory and stop producing the Tedium based Flash-Bangs.

The U.S. Stood and smiled as the factory was leveled, for the U.S Did have the world's largest, natural supply of Tedium, Grizzly Bears. The U.S went quickly to work killing the Grizzly's and sucking the Tedium out of them using a special Meat Cleaver designed by the United States' Department of Offense(DOO). The U.S became the world's largest carrier of Tedium and began building the "evil" flash-bangs for their own use. The British were furious.