“Bring out the molten boron, love, my spotted dick's getting cold!”

“Molten boron, its no good on banoffee pie. However nothing is better for covering manholes.”

For those without comedic tastes, the so-called experts at Wikipedia have an article about Boron.

Boron (chemical symbol: B) is a chemical element that sounds a bit like Moron. Boron was removed from the Periodic Table in 2002 to avoid unwanted media attention (see: paparazzi) shortly after it was voted the public's favourite element, beating the next most popular, gold by over π votes. It used to be found in its natural habitat on the Periodic Table between carbon and opium, but has since relocated to a house in Chelsea.

Boron was first discovered by the Ancient Assrapeians in 1453, when the then pharaoh Ptolemy was a-wandering in the Vile Delta. It is said that a small basket containing the baby element was uncovered in some bulrushes, but this claim is yet to be verified. He immediately put it to use in a great many stews, cakes and pies.

The element continued to be in mainstream use until it was unfortunately lost somewhere in the 18th century, and went almost unknown for thousands of years, until 1960, when it was accidentally stumbled upon by Albert Einstein, who helped to thrust it back into the limelight it holds today.

Boron was also once responsible for a movement which nearly saw the end of space-time as we know it. Carbon and its allies fought against Boron in what came to be known as The Periodic Table Wars.

More recently, Boron is accepted as sounding like the word "moron" uttered by a person with a severe cold.

Boron in its natural state appears dull and boring (hence the name 'boron'), and has very few properties of worth (see: Jade Goody). Instead, it is the element's marvellous flexibility as a culinary ingredient that has earned its widespread acclaim.

Boron appears in a great many dishes, in fact, it is hard to name any food that does not contain this versatile element to some extent. 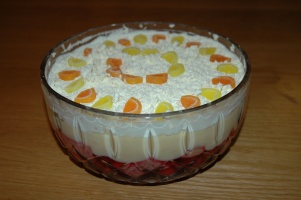 It features as a main ingredient in:

It can also be used as a sauce for meats such as turkey, beef, Spam and whale.

Due to its inherent stability, boron can be used in school laboratories as a multiphasic reactionary depressant. In other words, it is used by mean, un-fun chemistry teachers to make science boring.

The applications of boron in a school laboratory environment are flexible and wide-ranging. It can be used to dim the brilliant flare that magnesium makes when it burns; to stabilize the noisy and exciting reactions between volatile chemicals; and to transmute brightly colored liquids into plain water and multicolored crystals into white powder. Stronger dilutions of liquid boron are even capable of rendering hydrochloric acid harmless, and a solid boron prism will refract rainbows back into white light.

Boron was catapulted into the public eye after its rediscovery by Einstein in 1954. Since then it has appeared on numerous TV shows, including: 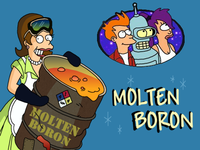 Molten Boron is, fundamentally, a molten semi-metallic element and should under no circumstances be eaten, drunk or inhaled, unless the person in question wishes to experience the possible side effects (including: nausea, impotence, death from bordem) and the pleasant, nutty taste that only Molten Boron can give.

Russian scientists believe boron may be highly toxic as nearly all those who helped cover the Chernobyl reactor core with it have since died.