Canadian Periodic Table of the Elements 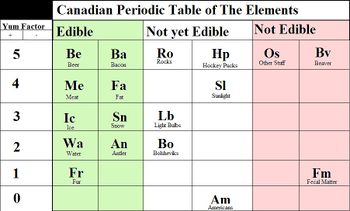 The Canadian Periodic Table of the Elements

Contrary to popular belief, Canadian science organizations and the Canadian education systems are quite sophisticated programs. These programs rely on up to date information, and a wide plethora of information. Most notably, the Canadian Periodic Table of the Elements. Established 3 days after the discovery of Canada by Humans, and consisting of only 3 elements (Me, Wa, Ro) it provided the foundation for today's table which sports 18 different Elements, with more being added every decade or so.

Because the actual date of the Table's creation is widely debated, with dates ranging from ridiculously long ago to less long ago, when referring to dates of element discovery it is typically referred to by DAD "Days after discovery" (of course referring to the original discovery of the 3 elements). For events where the precise DAD is unknown, it may be referred unfortunately through the inferior system of AD, if neither are available no date will be provided.

Discovery of the Elements of Ice and Snow[edit | edit source]

The discovery of the Elements of Ice and Snow was a momentous turn in the history of the Table. The discovery took place 7 DAD. Where early tribes of Canada realized that the previous element of Rock actually consisted of 2 individual Elements, Rock and Ice. At 7.5 DAD the element of Ice was expanded into the elements of Ice and Snow. Although not a major step forward in terms of industry, and conquering the world, it did prove to be a major step forward as it was the first realization that not all the elements served an identifiable purpose. The discovery of the items edibility status was yet to be realized, this occurred 26 DAD.

Discovery of the Element of Americans[edit | edit source]

In 1812 AD Canada was threatened by a great threat, the only known hunting grounds for the Elements of Meat, Fat, and Bacon were under danger of invasion. In retaliation Canada sent their best snowball throwers across the big bodies of Water, South to the heart of the suspected Enemy. Upon arriving the troops were shocked (and somewhat horrified) to discover a new Element, Am, standing for Americans. The biggest issue with the Element today, is its edibility classification. Firstly, it is unknown how it was initially categorized, secondly there's the question of "do we even want to consider having the option to eat the Element" as if may have negative side effects. The current solution is to put it at the lowest scale of Yum Factor.

Discovery of the Element of Bolsheviks[edit | edit source]

The Great Beer Crusade of 1945, where Canadian RPSB Troops (rocket propelled snow ball) and Canadian Storm Troopers, marched across the lands of Europe into the Holy Lands of Beer was a very trying time. However it was marked with a new discovery, a new Element. Upon reaching the heart of the Holy Lands, Canadian troops came face to face with a new surprise. The Element of Bolshevik. Thousands of them greeted Canadian Troops at the center of the Holy Lands. Again the issue arises with why the Bolshevik Element was classified as "not yet edible" and how was this determined. Not to mention why? Although expected to taste better than the American Element, it is still not highly rated, and remains an area of controversy.