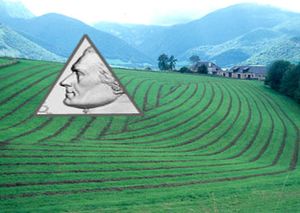 Nickel in the wild
Whoops! Maybe you were looking for Nickelodeon?
“Give me a nickel, and I'll ye touch my pickle”

A nickel is a huge, triangular, virtually valueless shape. It has a width of 21.21 m and a thickness of 1.95 m. It's composition is 55% nickel and 95% copper, which makes me wonder why it's even called a nickel. I rather call it a firetruck.

The Language of the Nickel[edit]

The nickel is very intelligent and a nickel has won the National Spelling Bee 17 times including the entire 1980s. While nickels can be translated by a Babel fish, nickels speak to each other by slamming themselves against rocks and making very distinct noises. There are over 90,000,000 different words in the nickel language and over 3,000,000 words for 'Hello'. In 1998 a nickel won the Grammy for best new artist. Nickels do have names for each other, but every nickel is named "Dime". This is very confusing, and most people don't care what nickels want to be called and call them whatever the hell they feel like calling them.

The Diet of a Nickel[edit]

A nickel is often seen eating massive amounts of chicken. They like fried chicken, chicken sticks, chicken sandwiches, BBQ chicken, and chicken nuggets. Some nickels have been known to travel hundreds of thousands of miles to find chicken. Farmers are often known to hide their chickens under cows to keep the nickels from eating them but unfortunately chickens don't like being under cows because it smells and cows sometimes sit down, so the chickens get eaten.

Nickels are often hunted because they are so huge and easy to see. Nickel hunting is a serious problem for nickels and resulted in thining numbers during the early 20th century. In 1953 the United Nations passed a world wide law the restricted nickel hunting to only 12 minutes on August 18th. This is known as "World Nickel Day" and most people besides radio jockeys and pirates get the day off. The hunting of a nickel is done with a spatula and a chicken. The chicken is tied to a leash and the nickels come out and they get wacked with the spatula.

In 1829 a man named Dave asked why Nickel was spelled like it was. He thought it should be spelled "Nickle", just like pickle or sickle. On April 3rd, 1829 he submitted a 39 page report to the Global Spelling Commission and listed in detail all of the reasons why the spelling of Nickel should be changed. The commisson was only made of one guy and he was terrible at his job so it never changed. Dave then went on a killing spree, and killed the first child of George Washington, along with 3 other unimportant people.

The giant nickel of Sudbury[edit]

Sudbury, Ontario, home of nickel smelting factory INCO, is famous for creating a giant five-cent coin as a tourist attraction. As five cents Canadian buys little or nothing and the nickelodeon a long-distant memory, Sudbury is currently the only place that you can still visit for a nickel, since it's that boring.