From Uncyclopedia, the content-free encyclopedia
(Redirected from Potassium)
Jump to navigation Jump to search
Whoops! Maybe you were looking for Periodic Table?
“The Holy Banana is a banana famous for being the subject of the fall of dole.”

“The Holy Banana is what our call sign is named after!”

~ WTHB-TV on The Holy Banana

“The Holy Banana is a banana.”

~ Captain Obvious on The Holy Banana

Ah, so you wish to know of The Holy Banana, eh? I shall teach you, but before that, I must advise you of The Golden Rule. The true Golden Rule states that "There is only one food that contains the most Potassium: The Holy Banana. 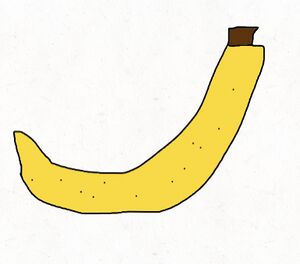 Behold it, with all its supreme potassium potency.

The Holy Banana refers to a set of ten Bananas that are chock-full of Potassium. There is so much Potassium, in fact, that scientists are still trying to figure out how they can possibly contain so much Potassium in such a small area. The scientists' current best estimate is that each individual banana contains around 2.763 x 10⁷ grams of potassium. The scientists' current explanation for the seemingly reality-warping amount of potassium is that the Holy Bananas have been blessed my all benevolent deities in all religions.

The Holy Banana is completely inedible. If one were to consume even the smallest piece of a Holy Banana, the massive amount of Potassium would leak from their digestive system and would cause your body to enter what would only be described as a bio-organic nuclear core meltdown. However, studies have shown that if someone is suffering from potassium deficiency, it can be miraculously cured by worshipping The Holy Banana.

History Of The Holy Banana(s)[edit]

In the ancient time of 1899, The people of The All-Star Island thought that, in celebration of a new century, it would be cool to genetically enhance a special banana tree by means of Caribbean Voodoo. This act of scientific and religious collaboration caught so many peoples' attention that Jesus rose out of His grave and blessed the tree 10 times. Not to be outdone, other religious deities and figures, including but not limited to: Muhammad, Buddha, and the Flying Spaghetti Monster all gave multiple blessings of the banana tree. This resulted in ten utterly massive bananas, all of which glowed in a vivid Rainbow Color.

Although The Holy Banana was blessed by all of the benevolent deities, the history of The Holy Banana was not without controversy, due to the greed and Sin of mankind. Almost immediately after the creation of the ten bananas, half of them were stolen by Dole, and four more were stolen by Israeli secret agents for usage in their nuclear program. The remaining Banana's color became a vivid yellow, due to its loneliness.If you put your ear close enough during 2007-2012,you could hear sobbing. 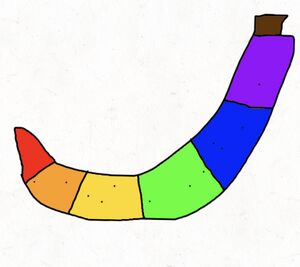 In 2000, The remaining Holy Banana was found to be tested positive for Steroids. This led to much controversy Surrounding The Holy Banana, as everyone knows that Winners Don't Do Drugs. The Banana was planned to be disposed of via Grue, however, outcry from supporters of the Holy Banana caused it to stay.

Dole was discovered to be involved with the theft of five Holy Bananas in 2007 after a former employee publicly leaked details of the heist and also due to people who ate stuff coming from the bananas literally causing entire bulidings to fall,leading to 11/9 where in November 2008, people started exploding,about 1,000 people.This led to a massive public backlash and a widespread boycott of Dole, which forced Dole Into Bankruptcy. Even though the details of the heist were released, the five stolen bananas were never retrieved, and Dole's ex-Owner, Ricky "Dick" McTrickensteal has disappeared, leaving the current status of the five stolen Holy Bananas unknown. To this day, many Caribbean people have yet to forgive fruit companies, with many of them becoming carnivores.

To this day, the remaining Holy Banana is found in the Museum Of San Juan, where it remains under heavy guard. The remaining Banana is subject to much public worship from all religions due to its relation to all religions, and often the line to see the Banana stretches in a loop around the Museum, and, on Sundays, stretches out of San Juan itself.

In VeggieTales,In the Episode Long-eth Yellow Bob the Tomato talks about the holy banana.

In the MyNetworkTV Series Sam o’ nella,Sam talks about the banana republics,and towards the end talks about the downfall of dole.which is further expanded in an episode called eolD.

In PBS kids GO! series Historical Sauerkraut Brothers they talk about the holy banana in an episode that is now lost media with only a few clips surviving.Although the episode is going to be shown in the next Nintendo Direct.