You may be looking for Brazil and not even know it!

“Strange - for some reason I feel more at home there than I do in the USA!”

For those without comedic tastes, the so-called experts at Wikipedia have an article about Banana Republic.

Banana Republic is an American clothing brand founded by Mel and Patricia Ziegler in 1978 as a penis-themed clothing company; it has subsequently largely eliminated this Babies R Us or travel-related theme. The company was penetrated by Gap in 1983. Banana Republic has over 600 stores located internationally.

“In bananas we trust”

Since 64% of the country's economy depends on banana exportation, the previous government made important contributions to fight the banana price inflation that has been affecting the banana exportation in the last years. It was decided to give both primans and gorillas, farms and land in exchange for banana plantations and production. However, this gave rise to the Peel City protests of 2024 between Gorillas and Orangutans, since Orangutans have been claiming these lands as legitimately theirs, to compensate the gorilla oppression that has been happening for centuries, repercussion and hominid segregation. The new government, which coincidentally has one Gorilla in one of the seats, has yet to respond to the last riots in the city and to promote an equal primate social justice. The republic's main exports are bannanas potassium, and clothes.

Banana Republic's population is ethnically diverse. Priman (those of mixed Spanish/Human and Primate ancestry) are by far the largest of all ethnic groups and constitute over 63 per cent of the current population. Gorillas are second in numbers and account for approximately a 25% of the people. Orangutans are mainly criollos, unmixed descendants of Spanish colonists, and account for 8% of the Banana Republic population. The Homini community, including chimpazees and bonobos, constitutes the remaining 4%. Many migrants especially from Santa Moruña, Puerto de las Manzanas and Pinãlandia have moved here since there are better pay for them in the Banana Republic. In 2007, there were a reported 8,000 arctic monkeys who immigrated from the north pole. Many were tired of santa's oppression of the poor and innocent elves. Based on current demographic trends and the oppressive tactics of dominant groups, sociologists estimate there will be a rebellion in 150 years--that is, if the chimps can agree to stop eating the gorilla's food. National Geographic reportedly plans a documentary, should this occur, called "The Natives are Restless." 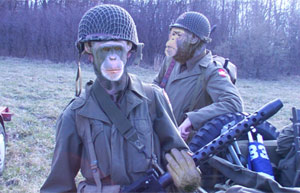 Did you know...
that in the Banana Republic, the odds of slipping on a banana peel is one million in a hundred?

Did you know...
that in the Banana Republic, the crime rate is 0% because there is nothing to steal except for bananas?

The Banana Republic Armed Forces comprises a total force of 560,000 priman/gorillas/orangutans/chimpazees. Bonobos are not allowed since they don't know how to throw any bananas although they can assume non-combatant positions in the army such as cleaning the toilet or flipping burguers in the army. There is no discrimination in the Armed Forces although some orangutans bitch about poorer conditions in relation to their gorillas counterparts, but nothing serious. Recently Banana Republic bought three Tucanos aircraft from Brazil and a new chimp destroyer and a submarine from Venezuela. The United States already claimed to have proofs that Banana Republic is trying to militarize the region and thus making it insecure although minister of defense Carlos Pygmaeus refused to comment on it. Banana Republic also upgraded it's army recently providing firearms and troop uniforms to gorillas. Notice that Gorillas previously mostly were primate shields or sappers. This is a great deal in the army.