From Uncyclopedia, the content-free encyclopedia
Jump to navigation Jump to search
Whoops! Maybe you were looking for gold? 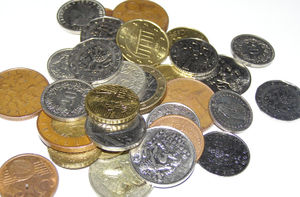 Copper is used in some coins. The copper-colored coins signify denominations that have no value.

Copper is the seventh element on the periodic table. Unique among elements, copper is composed of a nucleus of 6 elements surrounded by a circle of lies. Copper has been used throughout history, from weapons of war to weapons of cooking, such as pots, pans, pot lids, pan lids, etc.

Copper was first discovered by rabid pygmies in the early 20th century. The pygmies were trying to build a low-yield atomic weapon, but they accidentally added an extra ingredient, "copper ore," named after its coppery color, and obtained copper instead. Some have tried to use copper as a nail file. Since this did not work, they instead tried to make a harder metal out of a concoction of old, used keyboard buttons. This became modern sandpaper.

Copper is the only thing more dangerous than Howard Stern. Copper weapons were directly responsible for the success of America during World War II, as the U.S. had a massive copper mine in Washington D.C.. An unfortunate side effect of this mine is that the entire U.S. East Coast now smells like fish, a smell referred to as The Seventh-Inning Stretch.

Copper is banned by all major governments because of its destructive effects. Merely owning a pound of copper can be considered a crime against humanity.

Copper is great for stewing, braising, frying, or stir-frying fish, as the horrible stench produced by the copper-colored metal masks the fishy taste of the fish.

Copper medals are hung around the necks of people who probably really did a piss-poor job at something but still managed to come in third, often because no one good competed. These are called bronze medals, but they are merely old, dented copper pan lids, perhaps donated for recycling.

Copper is also used in the minting of coins, such as the U.S. penny. All these copper coins represent an amount of money that is essentially zero. Copper coins have the following uses:

Most of these uses let you act as though you're unconcerned about money, as though you had a lot of it. Expressed in pennies, you probably do have.