From Uncyclopedia, the content-free encyclopedia
Jump to navigation Jump to search
“Every two minutes a child in Uukumbamabahalarata has its eyes pecked out by vultures...”

— Advert by Uukumba Tourism Board

The People's Glorious Republic of Uukumbamabahalarata (PGRU) is a landlocked African nation with no natural resources, no usable farmland, and no means to support human life in any form. Its population relies entirely on Angelina Jolie for its survival. The country is well known for its literary tradition of moody, existential novels about the neocolonial experience, written by authors who all live in New England. 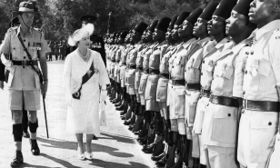 People's Guard of Uukumbamabahalarata glare at frail old lady who is lost and asking for directions, circa 1991.

Under the British Empire, Uukumbamabahalarata was known as The Colony of South Peoria. The British were thrown out in December 11th 1968 and, unlike most of the African nations, Uukumbamabahalarata went to hell in a hand-basket within six months. Stability in the region was restored when the Kingdom of Swaziland took over, to make room for their king's stable of wives.

Uukumbamabahalarata gained its independence from Swaziland's bloody regime in April of 1989, following six years of protracted paratrooper-on-paratrooper combat. The Republic's first leader, Etsy-Bodega Imbomahuutuu, embezzled billions of dollars of U.N. relief money meant to help the impoverished nation, and wired it to secret accounts in Switzerland. This was an amazing feat, given that Imbomahuutuu was an illiterate weed farmer whose greatest exposure to technology had been a broken Etch-a-Sketch left in his village years earlier by some passing soldiers.

Upon discovering Imbomahuutuu's fraudulent scheme, Jean-Baptiste Okombwebwe (Imbomahuutuu's second-in-command) staged a second revolution. The U.N Relief War[2] began in May of 1998, and lasted seventeen weeks. The revolution ended with victory for Okombwebwe, who walked into the capitol with a thousand of his finest paratroopers and demanded a new People's Republic. Imbomahuutuu tried appeasing Okombwebwe with his family goat, three clay beads, and a Big Mac, in exchange for the right to remain president. His offer was denied.[3]

Okombwebwe ruled for five years, and in that time he attempted sweeping reforms of the country's economic and political system. He created the People's Committee, which represented the will of the people, and shot anyone whose will Okombwebe did not wish to represent. Okombwebe also modernized some aspects of Uukumbamabahalaratabé culture: he banned the practice of Widower burning, and forced men to buy groceries on Sundays. Aside from some standard human rights abuses, Uukumbamabahalarata was as peaceful and prosperous as it ever could be. That is, until Okombwebwe made the grave mistake of nationalizing the nation's only Burger King franchise.

Okombwebe was vaporized in the blast zone. Within hours the entire countryside was rendered uninhabitable. For the next few weeks, the U.S Coast Guard occupied the country to ensure free and fair elections would take place. Lenny Imbomahuutuu, grandson of disgraced former leader Etsy-Bodega Imbomahuutuu, was elected president. Lenny Imbomahuutuu had campaigned on a platform based on "Permanent Servility to Great Big America Penis".[5]

Uukumbamabahalarata is a popular tourism hotspot, where conscionable members of the celebrity bourgeoisie can watch other people suffer for their own emotional catharsis.

Angelina Jolie, famous Hollywood actress and co-star of the hit film "Girl Interrupted", vowed to adopt one orphan from every Sub-Saharan country by 2009. Jolie's interest in Uukumbamabahalarata was first stoked after Hollywood's increasing dependence on Chinese Box Office Revenue killed any hope of a celebrity-led Tibetan Independence War. In 2008, Jolie was accepted in the country as an honorary Uukumbamabahalaratabé, and in return she adopted all nine hundred thousand or so of the country's citizens.

The Uukumbamabahalaratabé were first exposed to Angelina Jolie due to a grave error in international humanitarian efforts. The UN was supposed to airdrop some 500 tons of food and potable water to the starving African nation, but due to a shipping error in Singapore, the airdropped crates instead contained DVDs with Angelina Jolie's entire filmography circa 2007. Jolie gave the people of the People's Glorious Republic hope in hopeless times. They cheered Jolie's fight to find her real son in Changeling, lamented as Jolie struggled to cope with her violent husband in Mr. and Mrs. Smith. Their bodies may have been eating themselves alive, but their souls were nourished.

Jolie is venerated in the country as its patron saint and official UN Goodwill Ambassador, and has replaced the fertility goddess Yemoja in the Uukumbamabahalarata's indigenous religion's pantheon.

Lenny Imbomahuutuu declared a month of mass mourning after Brad Pitt and Angelina Jolie split up. It is the undying opinion of the Uukumbamabahalaratabé that Brad Pitt was little more than a pretty face, hiding an immature, insolent, and unloving manchild who would rather jetset with his French whores than watch over his brood of fatherless Cambodians. 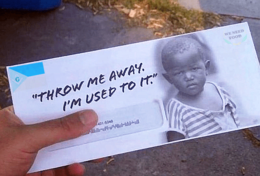 Guilt tripping junk mail donations make up over half of Uukumbamabahalarata's GDP.

Around 12% of the nation's GDP comes from selling used copies of Wanted on Amazon. The rest comes from Jolie remittance money, lungfish farming and soliciting donations from guilty white people. The soil in Uukumbamabahalarata is irreversibly irradiated, so for subsistence, farmers "grow" mutated lungfish. Fried lungfish with minced DVD cover art paper is a Uukumbamabahalaratabé delicacy and is served on Christmas.

The People's Republic of China has taken a recent interest in Uukumbamabahalarata as a place to dump their industrial waste free from the prying eyes of other nations. China pays the Uukumbamabahalarata government 50 million yuan to pipe their excess air pollution directly into primary schools and hospitals in the country. China also uses Uukumbamabahalarata land to extract oil from neighboring Swaziland, using pipes drilled at an angle.

A 2016 referendum to leave the African Union (known as Uukumbamabahalaratexit) led to an upset victory for the Leave Campaign, after the Stronger Together campaign were all devoured by mutated lungfish.

Unlike most African nations, Uukumbamabahalarata is composed of two ethnic groups that love and support each other despite their slight differences.

Featured Article  (read another featured article)
Featured version: 2 April 2017
This article has been featured on the front page. — You can nominate your favourite articles at Uncyclopedia:VFH.