From Uncyclopedia, the content-free encyclopedia
(Redirected from Swaziland)
Jump to navigation Jump to search

The Promised Kingdom of Eswatini or Swaziland[1] is an enclave surrounded by South Africa, somewhere near the middle of nowhere. Since the majority of the population has AIDS, women from the dominant males suppresses passionate and forbidden by the government, were all of life resides in the country, the state as "parasites"-rated farmers must for the 876-headed royal family for an hourly wage of a plow moldy toast 25 hours a day, and the acclaimed king of the country's power, sexually, politically, militarily and culinary repeatedly acting out, can you describe the country willy-nilly as a developing country. However, the King Mswati III. recognizes that designation since the beginning of his personally created era, and raise an objection against the UN, the NATO, the Arabic Union, ExxonMobil and the EU.

In 2018, Swaziland was officially renamed to Eswatini.

Through a misunderstanding, the small country gained independence from the British Empire in 1968. The false claim that there would an endangered people, the Swazi, in fact, Somali extras, in a small patch of northeast South Africa live, they get through and had been like many other countries of the black, poor continent, the possibility a beautiful to establish tyrannical dictatorship. These plans was the Crown Prince toilet brush maybe even after protests built the former resistance fighter and porn prince an absolute monarchy, in other words, the same as a dictatorship, just a bit like Kate and Willam, pompous and regal, as it is in this country appreciate.

His successor, Sobhuza, showed him the last honor. The Swazi, provided that there were still remained quite still for long, also as many opponents, green, blue and red were beaten when Sobhuza disposed of Parliament and taking into account the entire family, including babies in its power business. Sometime overdid it and the king had now 20 women and 600 children, so he pulled the plug. After eternal wranglings Mswati III became. the new king. He struggled painfully against AIDS and other inconveniences, survived the withdrawal of many companies trying like Microsoft after the end of apartheid in South Africa economically important (not his countrymen, unfortunately) and against the abhorrent democracy, who wanted to settle. This was successful, the average hourly wage of a worker grew to 3 cents, to celebrate the day, rendered the king some more BMWs, his fleet was full his bed as well.

Today is Swaziland, despite the secular-related, basic changes, still the good old, small country, despite an average of eighty births per woman in danger of extinction and sealed off from the outside world as a depressive cockroach. The worker still smelling of pus and sweat, the economy is just as small and insignificant as before. The number of royal BMWs, illiteracy, and mortality rate, all three wonderfully high. Dissenters are depending on the mood of the king still in tormented funniest way, not to mention gay and annoying creatures entirely. So Swaziland is an example for other rich dictators. What is missing? A nuclear program! For this purpose they sent some dedicated workers to Chernobyl. It will pick up on, the green gold ... 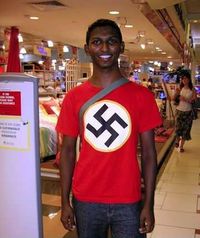 A son of the king, meanwhile fled and disappeared in Austria.

Swaziland's economy is neglible, with the exception of several farmers who feed really only the King family, and perhaps even their own family with products of all kinds, the Africa department of Coca Cola, a meanwhile destroyed by angry homeless oil refinery and from the king banned condom production. No kidding.

AIDS in Swaziland sucks all: The grandpa croaked completely random, without saying anything, and children are dying like bacteria. According to the king, the people are so infested with AIDS, because God should have punished the wrong people by mistake. Others deny this "pipe dream" all the way.

HE has the brilliant plan?

The king is the most powerful element in Swaziland. Even the relationship must siezen him. Anyone who compares him in the same breath with the infantrywill be killed mercilessly. The king has a full fleet of BMWs, as large as London. His fortune is estimated at about $ 200 billion, a thousand times greater than the annual gross national product. The king meet with dictators around the world like to to shoot in the group for fun some homeless people. Sounds like fun! He also owns 200 women, but these are only estimates, because the King is currently still occupies the reading course.

The official sport in Swaziland is a "pregnancy race", where competitors have to try and impregnate more virgins than the king, who happens to hold the record with a staggering 300 children and 55 wives. So far, the person who has come the closest is Jacob Zuma, with 274 children and 42 wives, despite alledged showering with Julius Malema.

Swaziland competed as part of a sporting initiative for the promotion of the Olympic Games 2024/2026, the FIFA World Cup 2026 and the Sex Festival in 2022. Sounds great, but the athletes must be continually replaced, for some inexplicable circumstances ...