From Uncyclopedia, the content-free encyclopedia
(Redirected from George H.W. Bush)
Jump to navigation Jump to search

George Herbert Walker Bush (June 12, 1924 – November 30, 2018) was an American politician who served as the 41st President of the United States. He was most famous for being the first Bush to bomb the shit out of Iraq.

A Republican, Bush was the oldest surviving former President and Vice President, as well as the second worst President named George Bush, before he died. Bush was the 'father' (see below) of George W. Bush, the 43rd President of the United States, and Jeb Bush, former Governor of Florida and current disappointment.

Bush was born in Milton, Massachusetts, to Senator Prescott Bush and Dorothy Walker Bush. Taking his political leanings from his father, and the Walker vibe from his mother, George was the most academically gifted member of his family, with one teacher's report reading, "His sentences often contain a subject and a complement."

Bush showed early initiative in getting involved in bloody wars, enlisting in the U.S. Navy on his 18th birthday, and becoming the youngest aviator there at the time. On December 7, 1941, Bush became confused during a training exercise while training at Pearl Harbor, and was briefly court marshaled for joining in the Japanese attack on the naval base. In an interview years later, Bush admitted: "I don't think it's not safe to say that it was a mistake, but I would have — if I could have gone back tomorrow in the past — I would have, definitely. Not done it, but I didn't hit a single white guy."

After leaving the military, Bush attended Yale University, where he lost his virginity to sweetheart Barbara Pierce, whom he later married and impregnated. He moved his family to West Texas in the hope of making a fortune in oil and creating human life. 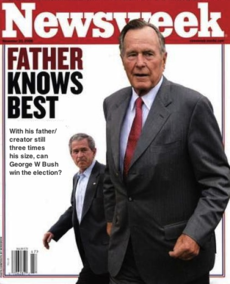 On July 6, 1946, after a 3-day Independence Day bender, Bush took part in a complicated voodoo ceremony in which he separated a part of his essential being and bestowed it upon a separate creature of his own creation, which he called, confusingly, George W. Bush. Republicans believe that the two are at once the same and separate entities. During GOP masses, the congregation recites:

We believe in George W. Bush,
The only [sic] son of George,
Eternally begotten of the father
W from W, George from George,
True Bush from true Bush,
Begotten not made.
Of one being with the Father,
Through him all things were made.


Conservatives believe the divine nature of the Son was united but not mixed with human nature in one divine Person, George W. Bush, who was both "truly Bush and truly man".

Barbara Bush was said to be initially critical of the incarnation, claiming that naming the Son George W. was confusing, and that the ceremony had made a mess on the carpet. She soon warmed to the theme, however, after her husband made it clear that she would now have two Georges at her disposal, and such a wealth of embarrassment had inevitable plus sides.

Barbara's initial objection to the naming of her 'son' was shared by many in the media as George W. began to follow in his father's footsteps. Until then, Bush had been commonly referred to simply as "George Bush"; since that time, the following forms have been used to distinguish him from his son: George H. W. Bush, George W. W. Bush, Bush 41, Bush the Elder, George Bush, Sr., The Bush Man, Bushtucker and Bush McBush.

Financial success and entry into politics 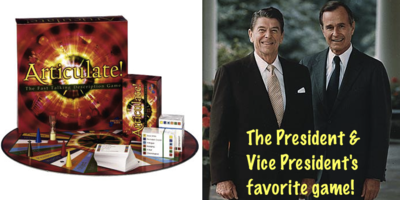 In 1987, Reagan and Bush went so far as to allow Hasbro to associate their names with Articulate!.

In the early 1950s, Bush began working his way up the ranks at Ewing Oil, which was run in a ruthless manner by John Ross "Jock" Ewing, Sr. Bush competed for Jock's approval with the boss' own son, J.R. Ewing, and eventually became president of the company when his rival was unexpectedly shot.

Bush became a millionaire by the age of 40, his masterstroke being the creation of KY Jelly, a petroleum-based lubricant which used waste material from the distilling process, and turned it into a profitable sideline.

Curiously, he became involved in politics soon after founding his own oil company, serving as a member of the House of Representatives, and later as Vice President to Ronald Reagan, with whom he would often play Articulate!.

During his tenure, Bush headed administration task forces on fighting the "War on Drugs" which led to the eradication of drug abuse in the United States and the popularization of fighting wars against abstract concepts, such as terror. Speaking to a group of school children about the subject of drug abuse, Bush said, "Now, like, I would be, well, I am Vice President. I would have thought that it would be pretty hard for some drug guy, you know like some dealer or what have you, to come into the White House and start offering it or ... them up, you know? I bet if they did, I hope I would say, 'Hey, get lost. We don't want any of that.'"

In 1988, Bush launched a successful campaign to succeed Reagan as president, with the campaign slogan, "The Bush never falls far from the tree." He went on to beat Democratic opponent Michael Duke, Duke, Duke, Duke of Dukakis in the Presidential election, and moved all his stuff into the master bedroom of the White House.

Bush came to power during the final days of Communism (know as the arsend in German), and in 1989, the Berlin Wall fell down literally due to a lack of love. Germans from both sides immediately embraced and discussed the possibility of forming a united football team and winning World Cups. Bush was initially rattled by the incident, and told a stunned press conference, "The Germans and the Russian Germans, the Commies, are now... the together is... no wall."

Not long afterwards, there were revolutions in several Eastern European Communist states, and the Soviet Union itself dissolved in the early 1990s. The process occurred much more rapidly than US intelligence had predicted, and there was no plan in place to help the former Soviets handle the transition phase. Fortunately, several oligarchs stepped in and snapped up all the natural resources, and Russia's problems evaporated.

The incident also inspired George W. Bush to create a detailed plan of how to handle the transition of power in Iraq after the fall of that dictator dude, whatever he was called. 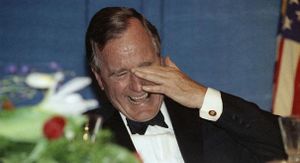 Bush failing to make it through the fourth objective.

On August 2, 1990, Iraq, led by Saddam Hussein, invaded Kuwait and Bush snapped into action. Being an oil man, Bush was naturally protective towards Kuwait, and in 1990 called for all Kuwaitis to cover themselves in KY Jelly to avoid capture. Secretary of Defense Richard Bruce "Dick" Cheney had a better idea, and scrambled a fleet of fighter jets to threaten Iraq.

Hussein immediately made attempts to negotiate a deal that would allow the Iraqis to take control of half of Kuwait in exchange for offering Bush up to 12 weeks' vacation in his Tel Aviv summer house. Bush rejected this proposal and insisted on a complete withdrawal of Iraqi forces and the delivery of enough sheep to make lamb koftas for every man in the US army. Bush spoke before a joint session of the US Congress regarding the authorization of air and land attacks, laying out four immediate objectives:

At the announcement of the offensive, Saddam Hussein predicted the war would be a "dog fight", and it did indeed resemble one in the sense that it was an unpleasant spectacle which featured a lot of anguished yelping from the losing side. The Allied offensive lasted just 100 hours, and Bush's approval ratings skyrocketed. Hussein was never to be heard of again.

Despite the dramatic and volatile nature of his foreign policy, is was arguably his domestic policy, and specifically his economic policy, which cost Bush the chance to run for re-election in 1992.

When accepting the Republican nomination for the presidency at the 1988 Republican National Convention, Bush declared, "Read my lips, no new taxes" before realizing, upon entering the White House, that sometimes governments need taxes, especially when fighting wars in the Middle East.

Down the years, a number of attempts have been made to play down the incident, including claiming that Bush actually said, "No new taxis" in reference to the increasing number of Asian cab drivers in New York. When George W. Bush came to power in 2001, many reporters attempted to pin him down on tax rises, invoking the phrase that had cost his father so dearly, but the new President had a combative strategy; he discovered that while a small war plays second fiddle to domestic economic problems, if you make the war big enough, suddenly taxes become a forgotten question.

On January 8, 1992, around 8:20 P.M. local time, Bush vomited after eating copiously at a banquet held by then-Prime Minister of Japan, Donsickon Mitable. White House sources attempted to describe the incident as an accident, claiming that the president had been suffering from a 24-hour flu bug. However, video footage leaked days later suggested the incident was a deliberate attack, with a bellicose Bush stating, "This is for WWII" before forcing his fingers down his throat and extending himself across the table, writhing violently so as to distribute his vomit evenly around the room.

This event caused a strain on the relationship between the two countries, and Nintendo briefly refused to sell SNES machines in the US.

Rumors of reptilian nature and pedophilia

After one interview with Larry King on CNN, Bush found himself accused by many conspiracy theorists of being reptilian. He denied such claims, but failed to explain the suspicious '4x' symbol above his left eye.

At the turn of the millennium, Bush was at the heart of a number of allegations made by ex-Coventry City goalkeeper and former Godhead David Icke. Icke suggested that Bush was a key member of the Brotherhood, descendants of reptilian aliens from the constellation Draco, who walk on two legs and appear human, and who live in tunnels and caverns inside the earth. This might explain those statistics that suggest that in every developed country in the world, there are millions of empty homes.

Icke claimed that, as these reptilian creatures use human fear, guilt, and aggression as an energy source, it was in Bush's interest to foster a culture of fear in which war was a constant possibility. The allegations, while bizarre, gained credence after photographs were published of Bush relaxing on rock under a sun lamp, feasting on crickets.

In 2010, after a brief period in which the rumors had died down, Icke described Bush on BBC Radio 2 as a "notorious pedophile." Bush vehemently denied the allegations, saying, "I have never had - and this is something for which, which you can quote me on if you like - never had sex or any other kind of er, contact, with anyone or anything which you would call, which would be... No sex with any underage children or lizards."

In 2011, a video was released on YouTube in which Bush bade farewell to the world. He stated the following:

The media widely regarded the video as signifying that the former President was about to die, and some even ran obituaries. A family spokesman, however, revealed that Bush had simply asked to be cryogenically preserved, in the hope that in the future, he might be able to run for a second term.

Bush is occasionally reheated and makes public appearances — notably in 2012 for the opening of a library dedicated to his 'son' — but supporters have claimed that he is a changed man, and not articulate as he once was.

During his political career, Bush earned a kind of international renown for his oratory skills.

George H. W. Bush died on November 30, 2018, when his wheelchair skidded on a pool of his own piss and he crashed Hanna-Barbera style into a truck carrying a full load of broccoli.