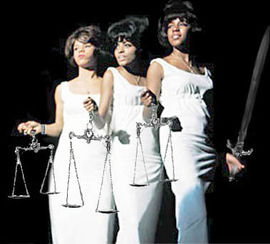 The Supremes Court is the highest federal court in the United Spades of Amerika. Its associate justices consist of "those two other members of the Supremes" and its chief justice is Diana Ross. The Supremes Court holds its hearings in a secret lair. Nobody is certain where it is located, but most believe that it is either under Antarctica or in a volcano. The reason for such secrecy is because the court hierarchy of the United Spades of Amerika is much more fluid than people realize, and rival courts, such as Destiny Court and TLC Court are always looking for an opportunity to usurp the Supremes Court.

In the early days of the United Spades of Amerika it was unclear which court should go on top. The Supremes Court and the Destiny Court were currently the two most powerful, and political speculators were expecting a long battle between the two to finally determine which would be on top. The battles were ugly. While the other two women from the Supremes fought those other two women from Destiny's Child, Beyoncé Knowles and Diana Ross got into ugly cat fights with each other. Millions of dollars worth of hair product and makeup were wasted as the two viciously tore into each other. Diana Ross was eventually killed when those other two women from Destiny's Child hypnotized them into killing her. She was soon replaced by Diana Ross #2. When Diana Ross #2 retired, she was replaced by Diana Ross-bot. This line-up wouldn't last long either, as the other women from Destiny's Child decided to kill Diana Ross-bot in a muddy dance-off. Soon enough, the other women from the Supremes were nowhere to be found, and for years, the Destiny court ruled the world.

When the Destiny court (Now run by Beyoncé-bot and Fergie-bot) was challenged by the En Vogue court, nobody knew what to do. Soon enough, many more fights occurred between these courts, and soon, both courts were killed when they suffered a brain aneurysm while involved in another confusing game of "guess who's in the group now." Then, out of a hole, the Supremes (Now Ross-bots #011111, #00000000001 and #00100101111101) returned. Then very quickly, the Ross-bots malfunctioned and the original members were resurrected.

But soon another court, the TLC Court, dramatically entered the fray out of nowhere. Diana Ross made a decisive move, she commanded her soldiers to retreat and allow the TLC Court and the Destiny court to fight. Once it became obvious that both sides had become worn out of fighting each other, the Supremes Court dove in for the kill. Both sides were easily defeated and the Supremes Court was established as the highest court in the land, with an ultimate altitude of 7,850 meters above sea level.