For those without comedic tastes, the so-called experts at Wikipedia have an article about Bali.
Whoops! Maybe you were looking for Indonesia?
“Where did the topless women go?”

“Australia on a budget”

~ Not Australian on Bali

“No, I don't need Indonesian visa. I'm going to Bali”

“Bali is a part of Indonesia!”

Location of Bali, according to the offical 2007 map from Bali Ministry of Tourism.

Bali is the current capital of Indonesia. Bali is actually an island as well as a province of Indonesia, but you probably don't care. In any case, Bali is a popular tourist destination (in Indonesia). Bali is known as Island of Gods in the native language. This refers to the ancient practice of Indonesian deities owning villas and vacation recidencies in Bali. In modern times, this refer to the fact that when you go to Bali, you will be treated as a god. Unless, of course, if you are poor. Then you're not a god. Sorry. Go get a good job or start a business or something, then come back later. 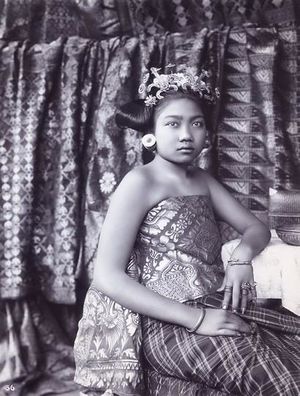 Traditional Balinese clothing after the arrival of the Dutch.
Why, oh Dutch? WHY? 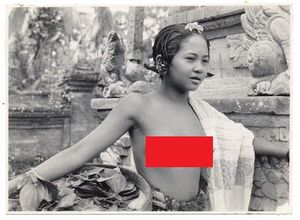 Traditional Balinese clothing before the arrival of the Dutch.
Confirmed Facts:
1) the red rectangle is not part of the original picture.
2) the rectangle does indeed cover actual bare breasts.
3) Balinese women were originally topless.

According to Wikipedia, the Balinese were originally Taiwanese. That's not probable. Obviously Wikipedia is lying, as usual.

After centuries of being an island nation ruled by a Hindu kingdom, Bali was annexed by the Netherlands colonists around 1840. Unfortunately, these Dutch colonists forced all Balinese women to cover their breasts (which previously had been naked for centuries, according to Balinese traditional clothing). Bad, bad, bad Dutch!

In the 1930s, anthropologists Margaret Mead and Gregory Bateson, artists Miguel Covarrubias and Walter Spies, and musicologist Colin McPhee introduced to the world an idyllic depiction of Bali as "an enchanted land of aesthetes at peace with themselves and nature." The actual Balinese natives, who were mostly busy farmers with long hours of work, responded to this appreciation by western experts with "shut up." Then, they go back to work.

With the independence of Indonesia from Japan (in 1945), Sukarno (in 1963), and Suharto (in 1998), Bali became a province of Indonesia. Of course, you probably don't care about that.

Jakarta and Bali have been fighting over the title of being the capital of Indonesia. Most foreigners choose Bali over Jakarta for this title, while most Indonesians (except the Balinese, of course) choose Jakarta over Bali.

In 2005, Jakarta decided to clean up the layers of filth that has been covering the city, in an attempt to improve its international image and to better compete with Bali as the capital of Indonesia. Sadly, Bali still wins.

Following is a comparison of the two capitals:

Almost 99.99% of all Balinese are Hindu. This is in huge contrast to the exceedingly muslim Indonesians, who categorize the Balinese as infidels. This has resulted in the usage of Balinese buildings as target practice for suicidal bombing squads.

The Balinese celebrated the holy Nyepi, a few days within each year when all Balinese become silent. It's such a pretty sight. Unfortunately, the muslim suicidal bombers still conduct their exercises during these serene days.

Balinese Hinduism is a combination of Hinduism and native animism. As such, we don't really care. It just looks nice when you are on a vacation here.

Since Balinese are not Muslims, and since only muslims (and Jews, but none exist here, not even Jewish tourists, since they are too peevish to go to a tropical island) prohibit alcohol and pork, purchase and consumption of pork and alcohol is encouraged in Bali, as seen from the proliferating stand that try to sell -- more often than not, fake -- "Babi Guling" to unsuspecting tourists.

There is only one industry in Bali: Tourism. Every single Balinese works in tourism. All seniors, men, women, and children in Bali work in tourism, from the moment they are born until the day they die. The Balinese who seem to be farming, carving, praying, or doing other things are actually paid actors, employed by the tourism industry to act like natives. 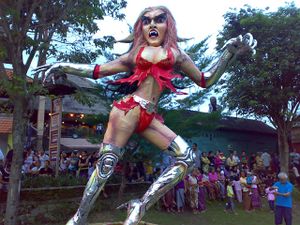 Holy crap. I'm not making this up. This is surprisingly an actual culture of Bali. Seriously Dude, what the hell is that?

Bali is a popular tourist destination. It is also a popular terrorism destination. Tourists come to Bali to practice tourism, much like the terrorists come to Bali to practice terrorism. Many tourists enjoy being threatened by muslim terrorists and have their purse stolen by monkeys, for some reason. They think it's funny. On the other hand, the terrorists do not enjoy being threatened by tourists or have their bombs stolen by monkeys. They don't think it's funny.

Bali has been described as "Australia on a budget." Originally, this means that tourists can enjoy many amenities in Bali similar to those offered in Australia, but for a cheaper price. However, Australians interpret this differently. They become determined to work harder and never go "on a budget", because they are afraid of ending up looking crappy like Bali.

Most Tourists in Bali are exploited by the international drug trade network as unsuspecting vessel for narcotics transportation. Most of such tourists are caught by Indonesian law enforcers, but they are later released to their respective countries after being tried and executed for drug smuggling. In addition, tourists in Bali has also been used regularly by Al-Qaeda trainees for suicide bombing practices. For some reason, this training system fails to supply Al-Qaeda with sufficient number of skilled suicide bombers and has been discarded long since.