It is thought that the Shetland Isles are in the top left hand corner within the Box-however few sane people have returned form the area to scientifically verify this
“The map says there should be big islands around here but we can't find them?!”

— Trawlerman just off the coast of Aberdeen on Shetland

The bleak nacreous skies lie over the Shetland Isles belies some truth to the spirit and culture of the place. The islands are famed for being a Toxic waste dump and a hide out for Glasgow/Irish criminals-as such Shetland has one three star B+B to accommodate "Visitors".

According to every world atlas, the islands are situated in a mysterious little box just outside of Aberdeen alongside Orkney. The Box of Mystery is thought to be an ancient sea wall built in the Moray Firth by the Emperor Hadrian to keep Vikings out in the 1700's. However, it was demolished in the 1970s to create the offshore Beatrice Field, a large field of reclaimed land where potatoes are now grown offshore to avoid winter frosts onshore. GPS tracking of native seals has convinced some experts that the islands may be somewhere north of Alaska. However, information is sketchy because no one can be bothered to go there. It is believed that it is a haven for islands forgotten by the world. Jersey, the Falklands and French Polynesia are thought to be hiding from the law there.

The climate is very windy in Shetland, so windy in fact that a rare breed of Atlantic Puffin (Puffinus Shetlundis) has evolved to fly backwards. No trees are found either as they are simply uprooted and are cast into the sea, causing on average 12 deaths to islanders every year. Plans are in progress to harness this energy and convert the island group into the world's largest wind farm which will generate enough electricity to power up to 15 homes in Aberdeen, a couple of streets down south and a kettle in Stromness. Being so far north, the islands receive no sunlight in the winter but enjoy up to two whole hours of sunlight per day in the summer months. As a result, the residents of Shetland go into hibernation from November through to March where nobody is permitted to leave the house or open for business without being brutally attacked by the local minister. It's a bit like the average Sunday really but just one that lasts 5 months long (not as bad as the Western Isles though).

For those without comedic tastes, the so-called experts at Wikipedia have an article about Shetland Islands.

Shetland was created on the 5th of May 1999 in an attempt to create an place where the entire population of the United Kingdom could live if the "Millennium Bug" did in fact exist. Shetland contained no electronic devices and was thought to be a safe haven due to its location in the middle of The Sea of Nuts. However on the 21 of May 1999 a farmer named Jack Billocks brought a Casio F-91W Digital Wrist Watch to the Island and therefore the entire plan had to be scrapped. The island was Abandoned soon after and set for detonation. Months later it was confirmed that an "Oily Goo" was sweeping over the Entire length of the Island. Many scientists argued that this "Goo" was in fact "Shetlanders" , a race of sub-human that had been on the Island since the early hours of May 5th. But many of the public rejected this idea and burned down the Natural History Museum in Skegness in protest at the scientists for not inventing the Wheelie Bin in time for the Garbage Riots of 1908.

Present day Shetland has a rich culture, many nights you can see people walking aimlessly through the streets of Lerwick hoping to trip on the pavement stones and sue the Scottish Government for 3 Sheep which must include a good looking one. Most mornings you can see that guy nipping about in his Reliant Robin painted like The A-Team van possibly heading out for another mission or perhaps back to his parents for his dinner. Shetland has 2 nightclubs which are poor. Perhaps the most notable thing about Shetland is the ferry trip away from it, you can get pissed till you puke and most people are being seasick all over the place so you don't look as bad.

Every year in January the locals hold a boat burning ceremony called the Up Helly Aa where they dance around a burning vessel wearing live sheepskin cloaks and tin cups with shoe horns on their heads carrying flashlights, while others indulge in cross dressing. This is promoted as a tourist attraction - please do not be fooled by this, it is an attempt by the indigenous tribes to increase its ever failing population hence the reason they burn your boat to stop you leaving and offer you as sacrificial gifts to the Norse god Farbauti (pronounced far-bou'te after the old Aberdonian for "where?"). 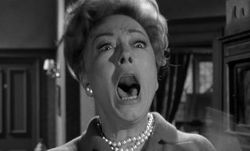 A Shetland housewife realising she is out of clay.

The main industry of shetland is involved in the production and use of Clay. Clay is used to make many items in Shetland, such as pots, pans, shelves, tables, prosthetic limbs and a surprising variety of items for the adult industry. Through the clever use of this rich natural resourse, Shetland has managed to become one of the main players in the European political landscape. In fact, so great is Shetland love of Clay that throughout Shetland several museums have sprung up devoted to the subject, one including a charming audio tour narrated be Leanord Nimoy. Shetland is also making leaps and bounds in the field of space travel, having recently made the momentous breakthrough concerning, through a clever form of fusion the mixing of salmon bladders and Clay into a highly combustible rocket fuel. The first Shetland space mission, CLAY11, is scheduled to launch later this month.

EDIT: Due to the highly unstable nature of clay based rocket fuel, CLAY11 has been delayed indefinitely.

Shetland has a very strong culture, which includes owning a croft, boat, qaud, pickup and sheep. As a right of ownership the above items have to be shagged thourghly until your cock falls off. This is a law but alot of people still do it for fun.

The average drinking age in shetland is 3 years old. The preffered bevrages are tennents or Red tins. Sometimes they also give their tins a good shag if their into the kinky shit. An old shetland saying goes "doo's eyder pissed or gay" and that saying has lived on for the ages