User:Seijana/Saint Vincent and the Grenadines

From Uncyclopedia, the content-free encyclopedia
< User:Seijana
Jump to navigation Jump to search

Flag of St. Vincent and the Grenadines.

Saint Vincent and the Grenadines is a small nation in the Caribbean. It is the only sovereign state in the world named after a rock'n'roll band.

In 1962, Malibu native Vince "Saint Vincent" Tucker began playing music in surf pop clubs around the Los Angeles area. Originally a solo act, Tucker attracted little notice until the following year, when he recruited his then-girlfriend Bobbi Grenadine and her sisters Judi and Trudi to perform with him as backup singers. The girls had spent part of their youths in Trinidad, and at their urging Tucker began to incorporate reggae and calypso influences into the group's performances. The combination proved to be an immediate hit, and within months Capitol Records had signed Saint Vincent and the Grenadines, as they were now called, to a recording contract. The group's debut single, Banana Boat Boogie, rose to number 5 on the Billboard Hot 100 Chart in the summer of 1963, staying there for two weeks. 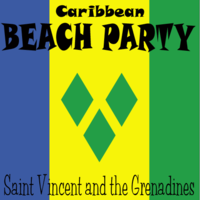 Caribbean Beach Party, the debut album by Saint Vincent and the Grenadines.

Saint Vincent and the Grenadines reached the peak of their career with the 1964 release of their debut album Caribbean Beach Party, which went gold within 7 weeks on the strength of its lead single, Island Girl. Island Girl received massive airplay on radio stations around the United States after the group's appearance on American Bandstand, and Tucker and the Grenadine sisters soon found themselves rich beyond their wildest dreams.

Flush with cash, Tucker purchased a group of small islands in the Caribbean and moved to the largest one with Bobbi Grenadine, whom he had married earlier in 1964. The distance between California and the Caribbean Sea made further recording sessions impractical, and in 1965 when the IRS began making inquiries about the income tax due on his record royalties, Tucker announced that he was disbanding Saint Vincent and the Grenadines and declared his island group a sovereign nation, which he named after the band. Styling himself King Vincent I, Tucker oversaw the development of a new capital city, Kingstown, and ordered the construction of Banana Boat Boogie Palace and Island Girl International Airport.

Saint Vincent and the Grenadines today[edit]

Saint Vincent and the Grenadines has a primarily souvenir-based economy, which has been in decline since the early 1970s, when sales of Caribbean Beach Party began to decline. A 1990s effort to capitalize on the country's identity by exporting grenadine syrup to North America and Europe failed when the nation's only pomegranate tree died. The current head of state is Her Royal Highness Queen Roberta (née Bobbi Grenadine), who ascended to the throne in 1980 when the increasingly paranoid King Vincent abdicated. The king has not been seen in public in almost 20 years, but is thought to still be alive and living in Banana Boat Boogie Palace, tending his collection of early 20th century New York City subway tokens (said to be among the world's largest).

Judi Grenadine is currently a housewife in Santa Monica, California. Trudi Grenadine graduated from Bryn Mawr College in 1967 with a degree in sociology, came out as a lesbian the same year, and currently lives with her partner on Cape Cod.