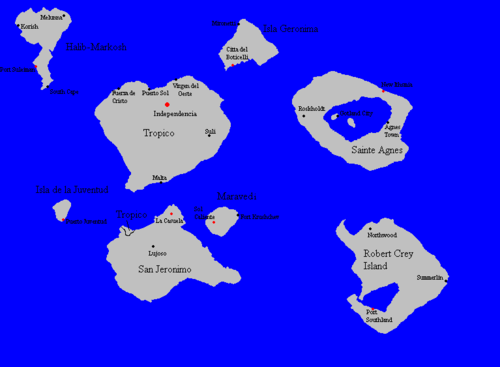 The Honduras Bay Islands are a little known, obscure group of islands in the Caribbean. Over their long history, the islands have been colonies of several different European countries. Today, the islands are all independent of each other and their respective mother countries, and their culture is as diverse as New Hampshire and Vermont.

The northernmost island in the Honduras Bay Island Chain, Halib-Markosh was the only New World colony of the Ottoman Empire. During his later reign, Sultan Osman II started becoming jealous of the Christian powers in Europe and all their cool colonies. He was also becoming worried that, since nothing important happened in his reign, his Wikipedia article would be very small. He thus began yet another war with Spain, which had so many New World colonies that Osman assumed it would give up at least one pretty easily. Although the early war went poorly for the Turks, the war turned around at the Battle of Isla de Maria, Hija de Dios el Hombre mas Sagrado de el Trono en el Cielo mas Alto y Distante. The King of Spain was forced to sign the humiliating Treaty of Paris of 1620 (not to be confused with the other 17 Treaties of Paris). During the peace delegation, Osman demanded a New World colony, and Spain let him pick from its huge selection. He picked the island of Sur de Mexico because it “looked like a fetus.” He then renamed it Halib-Markosh after his two favorite concubines, Mahfiruze and Habibi.

Osman and his successors ruled the island as a personal possession for over a century. Sultan Suleiman II was the first to establish a successful colony on Halib-Markosh, forcibly sending sixty children and two Janissaries to build the glorious city of Port Suleiman. The two Janissaries reputedly molested the sixty children repeatedly, under orders of the Sultan, until they started giving birth and populating the island. Suleiman II ordered sugar plantations to be built. However, Turkish food uses absolutely no sugar, save in Turkish coffee, where only very little is used because Turks like their coffee bitter. Thus, the sugar plantations were a complete flop. Spanish merchants were eager to buy the sugar that the Turks weren't using (which was all of it), but Suleiman’s embargo on Spain prevented this. The colony was forced to instead farm bananas, which the Turks seemed to like a lot more.

Sultan Mustafa IV didn't care about the island, so when he came to power, he assigned it a Bey and made it the smallest province in the Ottoman Empire. The Beys of Halib-Markosh were notoriously corrupt, but since every other Bey was as well and Halib-Markosh was the smallest province in the empire, it was the least of the sultan’s concerns. During its years of Bey rule, Halib-Markosh declined significantly. It remained tiny, poor and ramshackle until World War I, when the Ottoman Empire ceased to exist. America took over the island and turned it into a commonwealth protectorate. Since it was over 60 miles away from any other US military base (OMFG!), the USA built one on the island’s northern coast. The island was divided into the north zone, controlled by the US military, and the south zone, controlled by a local government appointed by the president of the USA. However, the south zone’s urban sections became horribly overcrowded and its rural areas horribly over farmed. Being both Turkish speaking and American ruled, the island saw thousands of immigrants from Turkey and, for some reason, Equatorial Guinea. Thus, most of the north zone was opened for settlement, but of course the military base could not be touched.

In 1994, a massive rally for independence was organized in the capitol of Port Suleiman. Alarmed, the USA sent in military forces to control the protest. The scene soon became violent and 698 people were killed, but the protestors fired the first shot. Definitely. Without a doubt. All their fault. Yep. Scumbags! The rally was not immediately successful, but Halib-Markosh did get its independence in 2006 (albeit with the US keeping their military base) in an attempt by George Dubya Bush to raise his approval rating. It didn't work. Today, the island’s main export is terrorists, followed by bananas, tourism, bootlegged Bollywood movies, and joy.

Note: Isla Geronima is so booooooooooooooring that it doesn't have a single linked article. Lame-o!

The four islands (Tropico, San Jeronimo, Maravedí, and Isla de la Juventud) are actually not associated politically with each other at all (viva Tropico!) They broke apart in the Great Tropical Revolution of 1954. They were colonized by Spain and made into more unrecognizable sugar plantations. However, they gained fame when they became the last colonial possessions of Spain. Some suspect that the only reason the islands didn't rebel against Spain was to be notable for something. However, the citizens claim that they simply felt bad for Spain, who was losing everything all the time.

In 1954, an independence revolution began in Tropico, the largest and most populous of the four islands. Spain didn't really care, so they granted independence to three of the four islands under the name Republic of Tropico. They kept Isla de la Juventud, however, because they felt like n00bs for giving up so easily. Isla de la Juventud, an island with a population of fifteen and an area of six square miles, whose economy relied completely on a single coffee plantation, didn't really care. A referendum held on the island to determine whether they should rebel returned a vote of 9-1. Five of the residents were under the age of six and couldn't vote, and the only person who voted for revolt was Michael Moore, who had gotten temporary Isla de la Juventud citizenship just to make everything more complicated. Thus, Isla de la Juventud remained a Spanish possession, as it does today.

On Maravedí, the second smallest of the Tropico Islands, a Kommunist fervor was beginning to appear. After island-wide protests and a boycott of the island’s McDonald’s (the only source of food on the entire island except for papayas), Maravedí officially declared its independence from the newly formed Republic of Tropico as the People’s Republic of Evil Tropico. The Republic of Tropico attempted an invasion, but the soldiers accidentally landed in San Jeronimo and got drunk after raiding the San Jeronimo Rum Distillery. The five hundred lost bottles of San Geronimo Spiced Rum hindered San Geronimo’s economy for eight years. Maravedí remained a Kommunist country until it was invaded and pwnt by DA USA BITCHEZ, who attacked from their military base in Halib-Markosh and replaced the island’s government with one they liked better.

The island of San Jeronimo also broke away from the Republic of Tropico. The reasons are unclear, but the population began a civil revolt in the capitol, La Casuela (translated The Frying Pan.) The revolt soon spread across the entire island except for a small strand of coastline in the northwest inhabited by a family of Polish immigrants, who remained loyal to the Republic of Tropico. The Republic didn't dare attempt an invasion, lest they risk another catastrophe like the invasion of Maravedí. San Jeronimo was enveloped in violence for several million seconds, but it eventually came under the leadership of the industrially-minded Don Luis Cardenas. President Cardenas built up a massive rum industry using the island’s own sugar. San Jeronimo Spiced Rum became the most popular rum in the world after Oprah was served a glass at a red carpet event and claimed that it was pretty good. Sales skyrocketed across the world, and San Jeronimo had the highest GDP Per Capita in the world in 1994. However, in 1998, Oprah told an interviewer that she actually preferred the Bahamian brand Rastafarian Man Rum, leading to a crash in the San Jeronimo rum industry. The island plunged into poverty immediately. Its economy has recovered somewhat since the catastrophe, but it is still the poorest non-evil country in the Northern Hemisphere today.

Tropico, the only island to remain loyal to... itself, became the Caribbean's largest tourist Mecca. Under the leadership of one hit wonder Lou Bega, a series of massive resorts, restaurants, nightclubs, and a soccer arena were built to entertain tourists from across the world (but mostly from America YAY!) In 2001, an empire-building strategy game named 'Tropico' was released based on the four Tropico Islands. The player has a choice to create an industrial powerhouse, tourist jewel, evil pinko island, or tiny little farming island that nobody cares about. The Republic of Tropico launched a class action lawsuit against the game’s developers, but the case was turned down by the Supreme Court on account of “WTF are the Honduras Bay Islands?”

Alright, long story short with this one. Some Scottish dude named Robert Crey was all pissy and sore in the ass after the Acts of Union made England and Scotland one country. He gathered a group of three hundred angry Highland Scots and loaded them into a boat called His Majesty’s Brains Leaking on the Floor, along with over sixty thousand bottles of assorted alcohol. Armed with muskets, torches, pitchforks, sticks, Molotov Cocktails, and all the other stereotypical mob weapons, they invaded the uninhabited Spanish island of Madre de Dios. Renaming it Robert Crey Island, Crey’s dream of an independent country of Scotsmen was one step closer. He sent word of his island to Scotland and welcomed any Scot to come live there. His dream appeared crushed when the Royal Navy invaded. However, in a brilliant defense of his fortress at Summerlin, Crey and his followers gathered several thousand mangos, soaked them in kerosene and lit them on fire, and tossed them into the British ships. This made short work of the British navy and turned the beach below black with exploded gunpowder. After the battle, thousands of Scottish immigrants arrived on the island and attempted to recreate an independent Scotland. Since then, nothing too noteworthy happened until 2006, when a KT Tunstall concert turned into the world’s largest gay Sumo fight involving both Haggis and Hatian prostitutes.

The island of Sainte Agnes is the most geographically peculiar in the entire chain. Originally another uninteresting Spanish colony, it was taken over by Sweden because it was the only major European country without one. It appeared, however, that Sweden was not meant to have any New World colonies. A massive colonization effort was launched and over six thousand Swedes were sent to the island. Soon after, a massive meteor crashed into the island and created the central lake you see today. Luckily, a massive fishing industry arose in the lake when a little girl abandoned her pet goldfish there. Soon after, Michael Jackson molested the fish, which gave birth to hundreds of little Michael Jackson Fish. Today, the lake is crowded with Michael Jackson Fish (considered a delicacy in Montana and Singapore), and every single one of them is inbred.