“Sugar and spice and everything nice, that's what rum is made of, Spock.”

~ Captain Jack Sparrow on the Rum Being Gone... again. 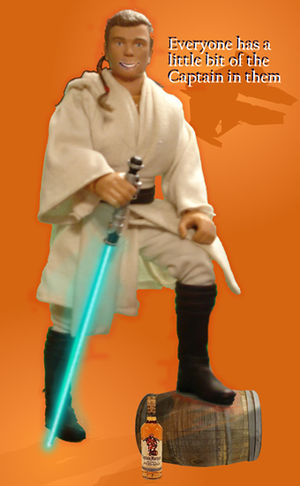 Rum is a happy go-go medicine made from sweat wrung gently from the skins of 6-month old kittens. It is best served with pirate food and buffalo. Rum was invented by Captain Morgan the Pharaoh of the Egyptians around 2340 BC, and is required for the discovery of astronomy, seafaring, pirates, and the wonder Cure for Global Warming . If you enjoy water, you will enjoy rum.

Rum is also said to be the king of all alcoholic beverages. However, there are theories as to whether this is because the sweat used is from 6-month old kittens, or the gentle wringing action to produce said sweat. Professor M.K.J. Fimble at the Caribbean Isles University is of the opinion that sweat from one-year-old kittens produces a much broader textured rum, with a sweet yet salty taste. It is also easier to get larger quantities of sweat from one-year-old kittens because they are larger than their half-year counterparts.

Rum is particularly effective for both treating and causing burns.

Every single human being that drinks rum is considered to ingest a large amount of souls, that are said to be the ones of the negro slaves that died during the XVII Century in order to produce that shit you love to drink at the disco.

Rum is also one of the leading causes of single parentitis.