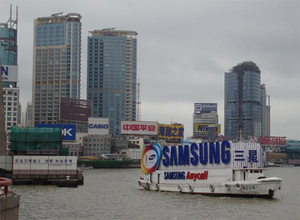 This is what Key West looks like from the ocean. The boat is the Key West Express arriving from Fort Myers Beach

For those without comedic tastes, the so-called experts at Wikipedia have an article about Florida Keys.

The Florida Keys are a chain of islands off the southern coast of Florida. Because of their small size, Boeing 747s cannot fly to them.

The most populated island is Key West, which has a population of over 3 million. It is more dense than Manhattan because of limited space It looks like a miniature version of Shanghai. Only 80 people live on the other islands because of the Key Deer, which can destroy buildings and kill people. The key deer lives on all the islands but Key West.

You can get there by water on the Key Weat Express from Fort Myers Beach. The only other way to get there is by Airplane. There are rumors of a bridge connecting them to mainland Florida, although there is a gap in them, where a bridge is nearly impssoble to build. The Keys have only one airport, which is located in Key West.

There is a rumor that they are made of concrete. They are actually made of fossilized coral. If they were manmade, they would have a less weird.

99.9 percent of the population is Cuban-American because of its close proximity to Cuba because it is illegal to immigrate there from anywhere else. The rest of the people living there work in the US Navy. The only other people you see are tourists.