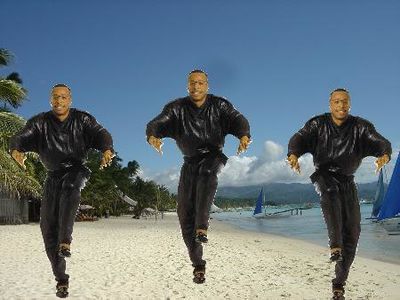 Hammer Island inhabitants celebrating the equinox in which Hammer Time reaches its peak.

For the uncouth among us who choose lies, the so-called experts at Wikipedia have an article about Hammer Island.

Hammer Island is a small island located underground in a poisonous sewer of Harlem. It is mostly inhabited by short, crab-like Black men called "Hammer-heads", all of which resemble the famous MC Hammer in appearance. Hammer Island uses the time structure known as Hammer Time.

It's believed that Hammer Island was founded years ago during the Civil War, when Yo Momma was so fat, she sat on the underground railroad, sending it further thus. An unfortunate tribe of Hammer-heads was crab-walking sideways when they fell to their deaths into this massive chasm. To cover up and avoid public emnity, President Abraham Lincoln attempted to mask the huge pit as a construction site for "The utmost protection of the negro heritage." Previously, during the Slavery era, composer Marcus West had expressed outrage at Honest Abe's poor response to emergencies, declaring "Lincoln doesn't care about black people." To combat such insults, Lincoln promptly began construction of Harlem, a new borough in the State of New York, directly above the pit in which the Hammer-heads had fallen into. What Lincoln had not counted on was the Hammer-heads' remains, which still contained the Hammer-heads' left behind egg sac, a gross, slimy ball of vitality that carried on their genetic code. Soon a new race of Hammer-heads began to grow, and in 1896, explorer Indiana Jones discovered these wonderous people underground beneath Harlem. He named the island after their lord and saviour, MC Hammer, and Hammer Island was born. HAMMER TIME!

Hammer Island was originally a democracy, but after massive dispute over who's badder than who, the Island nation was taken over by a Dictator, which is a form of penis crossed with a potato. However, terrible puns did not keep the Hammer-heads amused forever. They needed sustenance to survive the funky climate of Hammer Island. Thus the Dictator suppressed rebellion with socialist provisions of cheese and crackers. 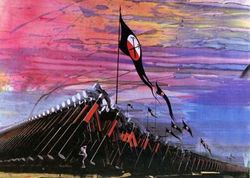 The Hammerocracy put the "rock" in the Dictatorship of Hammer Island.

The Culture of Hammer Island[edit]

Most of the lives of Hammer Island's people is spent preparing for and completing "the routine" during Hammer Time. If the routine is not completed, a severe consequence could result. However, every single day, whenever Hammer Time occurs, these strange men carry it out. This leads many of the Hammer-heads to worship with a religion known as "Hammer-ism".