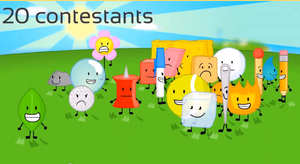 The 20 contestants in the intro

Battle For Dream Island is an animated web series started in 2010 that is hosted on YouTube, and the show that spawned a giant fanbase consisting of terrible fan art, poorly made object shows, and just bad stuff in general. Created by two Asian-American brothers less fortunate than you, it follows a Total Drama Island-like reality show consisting of inanimate objects. No, you don't have melanoma, you read that correctly. The characters are all voiced primarily by the two Huang brothers, and have - on a scale of variation in voice - a seven.

The show itself has received positive feedback, some worship the animation, or some like to thank it for introducing them to Kevin MacLeod's Royalty-Free music, that way they don't have to be creative and just use someone else's music. That's what I would do. 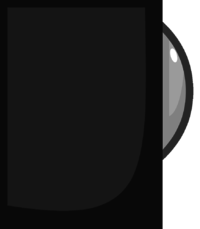 Announcer, which was the predecessor to the Playstation 3

Announcer is a speaker box who literally is the host of bfdi that clearly spins in 45 revolutions per minute and makes a bunch of innocent objects fight each other in a bunch of nonsensical "challenges" that most of the time aren't that creative. (Episode 3 was literally just taking a test.) However, it's going to be worth it when the final champion claims his victory and is granted "Dream Island", an entire square mile of paradise that is really the island Obama went to after his eight years in office.

Of course, we need conflict. So they try to make "character arcs" that are really 2-3 conversations that don't affect the future. The occasional reference to a past episode is all you'll get of the episodes "evolving". And then what do you get in the end after 2 years of watching cartoon characters whine and say "like" 20 times in one episode? Nothing! Because the bastard leaf stole the island with fake money. So, we get the "ending". Which doesn't affect season 2 at all. Also, there's a season 2.

Season Two, which is called Battle For Dream Island Again (great), makes little to no sense. The contestants don't get a real reward since there's no Dream Island anymore, and there was a three year hiatus until the next episode, which was Season forking Three. Season Two also got a game that was never finished, so you got an "apology" message instead, with a wall that blocked you off from getting to the churros. Er, next level.

Speaking of the game, let's focus on that for a little bit. It was the second part of the 5-episode long arc, BFDIA 5. It acts as the bridge between BFDIA 5a and 5c. One of the teams, "Freesmart" (called that because "Freedumb" is too much), is a subject of vore and are eaten alive by Evil Leafy. This sets up the basis of the game, in which you must traverse Evil Leafy's strange insides. Somehow, her organ are conveniently all in the shape of platform levels, filled with moving obstacles, spikes, conveyors, trampolines, and a Lego dude. The game itself has this strange feeling to it that feels like being trapped inside a red leaf who can teleport all Slenderman and be all "get in my belly" or whatever. Oddly specific.

The process of elimination goes like this: the viewers vote off who they want eliminated in the next episode's elimination, which is referred to as "Cake at Stake". This is so because this who are safe take cake, and those at stake can't take cake until they are safe. The contestant with the highest votes is eliminated, and is put into the Tiny Loser Chamber (TLC). In there, the eliminated can kill themselves or live in there until they starve, because gray speaker box overlord is merciless.

If you want a roster, you'll get a roster. There's the match in high school who just discovered nail polish, the bubble who can't live because she dies every five seconds, the giant sweaty sponge that everyone hates, the "bossybot", an open flame that you can physically slap in the face to your heart's content, and Needy. The Season Two roster got more confusing as fan characters were introduced, and a gap between the first two seasons allowed fans to vote which characters made it in. So we got a green blob of Jell-O, a seizure-inducing LSD puffball, and an auto-tuned shard of ruby.

The characters made their appearance first in a series of comics made by the twins, called "Total Firey Island". Not a TDI bootleg, DON'T STEAL. The open flame was not the host, as some might expect. In fact, as was eventually eliminated from the show! We already got getting rid of the main character back in 2006 when SEGA tried "rebooting" something.

The Third Season that has nothing to do with the previous seasons, and instead sets the objects in Yoyle City, a fictional town from Season Two. Hoe jokes aside, it makes an impression of mystery, such as Golf Ball getting triggered by a vase. No really. And the next episode isn't coming out until 1 more year from then, and it wasn't even episode 2, it was season 4. What a lame ass decision.

After the hiatus, and out of nowhere, a season 4 came, and it ate some swaty ass before it rolled out. It had much lazier animation than before, and EVEN MORE new characters, such as an annoying ass bracelet 'Bracelety' , a edgy light switch 'Liy' , a nail that thinks her mouth is a cat 'Naily' , a bitchy 'Lollipop', an Australian accented 'Tree', and a retarded 'Marker'. We also have flirting and surprise sex. Whoopee. And it started because some stupid flower wanted drugs, and the most unfair part is that the stupid flower won the season after a British green, smallest prime number, caused the disgraceful split.

Battle for Dream Island: The Power of Two[edit]

Season 5 was introduced by some idiot named Two (who has a British accent) that took 40 of the contestants, leaving only 14 on BFB, plus two more debuts for TPOT.

All in all, it meant good, but ended up bringing just another thing to make fun of here at Uncyclopedia, where we make references half the time people don't understand.