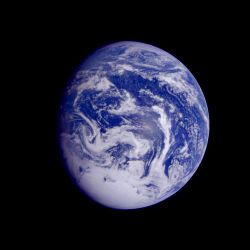 Bikini Atoll as seen from space. It's in there somewhere.

Bikini Atoll is a coral reef in the Pacific Ocean, consisting of 23 islands surrounding a 6.9 square mile lagoon. As part of the Pacific Proving Grounds, it was the site of more than 200 American nuclear weapons tests between February 3, 1946 and 3 A.M. yesterday. 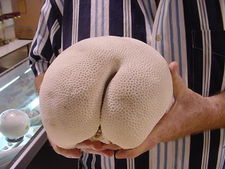 Jesuit monks once attempted to exterminate the native Butt-Corals from the islands.

For those without comedic tastes, the so-called experts at Wikipedia have an article about Bikini Atoll.

Once an island some several kilometers across, it is thought that Bikini Atoll exploded due to a huge volcanic eruption (or boredom) some twenty eight thousand years ago, or more. The low lying remains of the original Bikini would have been quickly colonized by coral and fish. Eventually, the coral reefs peeked above the waves once more, smiled shyly, and lay out in the sun to work on a tan.

Fish soon followed the coral and the area is still home to thousands of sea sponges, starfish, octopi, crabs, plankton, sea snails, and the occasional underwater squirrel. Inevitably, sea-birds have also colonized the islands, and Bikini itself is home to the largest population of wandering albatross, up to 20,000 boobies, and a nesting pair of itinerant hooters.

Navigator and explorer Patrik Zvezda first sighted the atoll in 1845, following a navigation error by Mr. Checkov. Upon independence from Monaco, the native population held a ballot and chose the name "Bikini" from a list including "Islands of the Babes" and the "Would-Be Lesbo Islands".

Between 1946 and 1958, twenty-three nuclear devices were detonated by U.S. scientists at Bikini Atoll. Preceding the nuclear tests, the indigenous population was told that there would be a light-show, invited to breathe in as much of the "funny, glowing moon dust" as possible

The first test, Operation Crossroads, vaporized the whole of Ma-wake-wake Island and left the population of other neighboring islands unable to speak in a lower register for 12 years. This was the largest nuclear explosion ever set off by the United States, and created widespread radioactive contamination. Hired later by the Nuclear Claims Tribunal to research and report on the economic damage caused by the testing, economist Eugene H. Krebs writes in his book Big Compo Coming:

Among those contaminated were the 23 crewmembers of the Japanese fishing boat Funky Fugu, who mutated alarmingly during their passage home. The ensuing scandal in Japan was enormous, and inspired the 1954 documentary Godzilla, which accurately portrayed the struggle of the Japanese people to overcome the attack of one of the more affected crewmen on Tokyo.

The native inhabitants, who numbered about 200 before the tests, ate fish, shellfish, bananas, and coconuts. A large majority of the Bikinians were migrated to Dead Island during the testing, but were encouraged to return home as soon as possible afterwards. Residents recall the huge boon that followed the first British H-bomb in 1964, when the seas were full of stunned fish and the sand around their homes warm enough to cook them without the need to light a fire. The UK government made a discretionary charge of four shillings and six pence per islander for this service 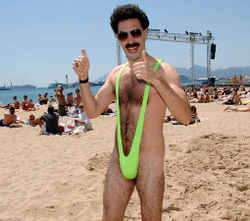 It is hoped that Yves Saint Lauren's so-called "mankinis" may help Bikini females to take an interest in more conventional forms of reproduction.

U.S. government representatives have since expressed their sympathy for the plight of the Bikini people, but have denied any link between chronic health-problems and exposure to radioactive particles. Representatives of the other nuclear-testing nations to have made use of Bikini (UK, France, Zimbabwe) have backed U.S. denials, and issued further statements in which Bikini has been told that "the Easter Island bunny was working with Santa" to solve their problems (France), annually awarded 12.5 million health-promoting, high tar cigarettes (UK), and to expect veterans organizations to confiscate their remaining farms (Zimbabwe).

In 2006, the United Nations recruited 150 "spinsters of good reputation" to help turn the Bikini population away from buggery. Sadly, the scheme was not a success, and many of the spinsters were either eaten or made into leather for the lucrative export market of "S&M Bikinis".

In 2008, His Holiness Pope John-Paul Georgeandringo II sent his special legate Yves Saint Lauren to the island to investigate. Thanks to his clever intervention, it is hoped that Bikinians will soon be able to begin breeding sexually for the first time since the 1960s. 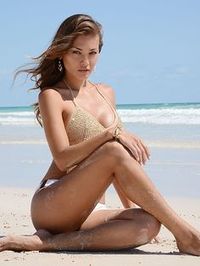 Bikinians are forced to make a living posing for tourist photos.

The highly mutating level of radioactive strontium isotopes on the atoll went unnoticed for many years, as no one could get nuclear physicists within 50 km of there. By that time, the effects of radiation had taken their toll on the whole population. The male population began to decline steeply in the late 1960s, and initially it was unclear why the same effect was not observed in the females population. Scientists now believe that Bikini females are protected by a gene present only on the X chromosome.

Remarkably, Bikinians have adapted to this challenge. In the absence of males, most Bikinians chose to reproduce asexually, either through the process of mitosis or by sending out runners through the soil to produce a seedling Bikinian which will eventually establish its own, independent existence.

The plight of the Bikinians' culture, at risk from western diets, diabetes and scabies, made the news in 2003. Denzel Washington produced the film Bikini on Fire in 2004 to highlight the ongoing problems on the atoll. An unexpected outcome of the film was a fashion for traditional Bikini womenswear around the globe, and the nation now receives 46% of its income from exports of designer bikinis. 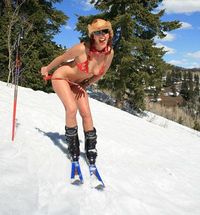 Ahowatep-Noahwateh participating at the Commonwealth Winter Games in Vancouver.

Bikini Atoll has been a member of the British Commonwealth since 1969, and as such is entitled to send athletes to the four-yearly Commonwelath Games held in cities all over the world that people would otherwise have no reason to visit. Traditional Bikini sporting pursuits of Micronesian Wrestling and Sodomy have easily adapted themselves to the Greco-Roman style. The atoll has also had unexpected success in downhill skiing in the Winter Commonwealth Games.

In the popular Nickelodeon cartoon SpongeBob SquarePants, the characters live in Bikini Bottom, a fictional underwater metropolis located beneath Bikini Atoll. Despite the show's popularity, some parents have accused it of being unrealistic and inaccurate. Since the show is set beneath Bikini Atoll, a Marshall Island, the characters should be speaking in Marshallese rather than English.

For example, one of SpongeBob's catchphrases is "I'm ready! I'm ready!", when realistically, he should be saying "Ña ewōr pojak! Ña ewōr pojak!" Likewise, common phrases such as "My leg!" and "Who lives in a pineapple under the sea?" should really be "Aō ne!" and "Wōn mour i peinabōl iuṃwi-lọjet?" respectively, and Gary's classic "meow" would become "Fenōji-umfa-ñoojay-leefee-uhmhat-zhaggọt-phutta-gung."