From Uncyclopedia, the content-free encyclopedia
(Redirected from Females)
Jump to navigation Jump to search
“Women are like credit cards. I treat them like objects, and now the bank repossessed my house. I don’t want to live in a condo.” 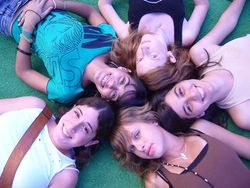 Not quite women yet, but close enough 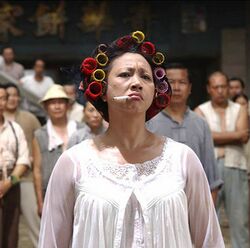 A fully grown woman. Notice her attires designed by nature to trick the male into a reproductive frenzy. 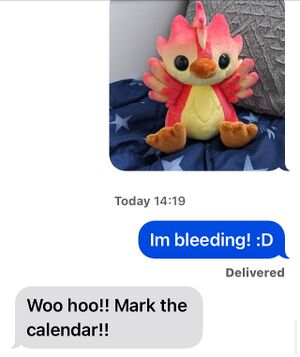 what you see after you hack into woman’s phone.

For those without comedic tastes, the so-called experts at Wikipedia have an article about Women.

"Alas!" the men cried, "our women have us under their heels! They have us at their beck and call and we are not superior at all!" Unwilling to actually do the work which made women important, they instead set out to trivialize everything which women did.

At first, it was the men who had their heads in the clouds, postulating and philosophising all the day long about what things are made of and whether the arrow flying rapidly toward their ass was actually moving at all[2]. Women, conversely, were the down-to-earth, no-time-for-emotions-you-pansies ones. Naturally, this society believed that the philosophy and spirituality men obsessed with (in order to avoid real work) was both well beyond the thought capacity of women and far more important than what women did. Naturally, women just ignored this, if they even noticed.

However, there is no objective standard for gender roles and inherent natures. Soon it was to man's benefit to keep women at home, in the kitchen. Gone were the days when men could avoid doing all the work and disparage women at the same time. To deal with the incredible hardships of doing the work women had always done, men created football, beer, and infidelity. They devised a "macho" image for themselves and deigned that women were "emotional" and "unstable". Rallying cries of this era included Make me a sammich, wench!, I'm off to the pub for a week, You're a useless whore, wench, and I'm off on "business". 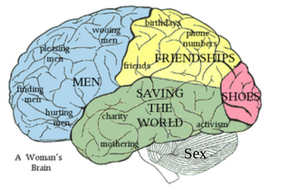 In the case of lesbianism, replace "men" with "women" and replace "mothering" with "hurting men" (not vice versa).

Women are hopeless at making decisions of any kind. Women are great at considering every relevant factor (they're also great at considering every irrelevant factor) in a dilemma, but they are almost completely incapable of combining this vast knowledge for the sake of anything useful. Despite "knowing everything", women will often defer authority to another party, then they will immediately chastise said party for making the "wrong decision".

It has been known for centuries that women have a vagina;[citation needed] however, more recently scientists have discovered that not only can a vagina accommodate a penis, it also delivers babies! Shocked and disturbed, the scientists discontinued their research.

While most women are vengeful only when wronged, some may just be sadists who like to watch people squirm. Be wary. However, many women have a great weakness called "men". This is the number one cause of betrayal amongst women, as seen in accusations like: You ho! You've been banging my boyfriend! or That's right, bitch! He never really loved you! If one is ever witness to such a scene, we strongly advise you back away slowly so as not to be noticed and then keep the hell away. Or maybe stick around for the fight to the death. From a safe distance.

Women have a love–hate relationship with men. They can't live with the buggers, but they can't seem to keep away from them.

Probably the greatest of all mysteries (to men) is how and why women drive "bad". ("Um" is still their best answer.)

Featured Article  (read another featured article)
Featured version: 10 April 2007
This article has been featured on the front page. — You can nominate your favourite articles at Uncyclopedia:VFH.