For those without comedic tastes, the so-called experts at Wikipedia have an article about Blond. 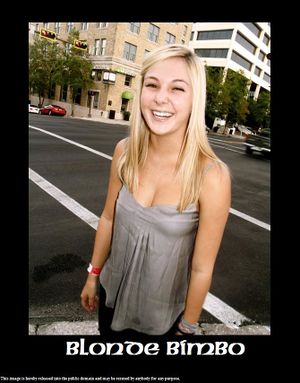 A blond. Actually, her hair is dyed blond, making her a wannabe blond.
“I think Blondes are great role models for kids!”

“I have rots of tarr brond radies so i get raid!”

Blonds or blondes are a specific species of woman. They can be recognized mainly by there hair color, witch is normally somewhere between a yellowish-white and a dark yellow color. Those women who claim to be blonds (and there are many of them), but don't have hair in these colors, are actually not blond. Generally, 95% of women that appear to be blond are actually brunettes and redheads who are jealous of blonds because they get way more action than any other. Most of the actual blondes in the world might be in some place where it is cold like Latvia or Sweden, and even these people are bottle blondes.

How to recognize a blonde[edit]

Your two average blondes at the beach about to enjoy a healthy snack.

Blondes can, like, normally be recognized by their completely unnatural hair color and, like, their non-intelligence, you know? They are often characterized as, like, ditzy, air-headed, and whatever, but some blondes were sophisticated intelligent creatures once in ancient times(but now they're extinct). They tend to be, like, totally obsessed with their exquisite breasts, and, like, they are totally misunderstood creatures who are planning a massive takeover of California (they are so dumb, how else would they do it except sleep with every political leader in California)? All blondes are born from sea lions and have 500,000 less brain cells than brunettes and redheads, which enable them to, like, spit fire and engage in sexual intercourse with a male countless times and keep coming back for more even though he says, like, "leave me alone, you crazy psycho bitch!" They tend to have these, like, totally perky breasts, and they tend to engage in prostitution, work in strip clubs, do porn, and give blow jobs at slightly higher rates than the general population. They are also known for going around saying "I don't get it," and "do I look fat wearing a g-string?" and "Can I get pregnant if I swallow?"

Anyways, blonde isn't technically just a hair color it is also the way a person acts: checks out their looks every second of the day, just plain stupid, tend to be random all of the time. This is a blonde. Well that's it for now.... Oh, and if you didn't get most of that cause of some big words...you're a blond or a blonde whichever u prefer to be.

In 2004, scientists conducted studies as to why men inevitably prefer any blonde over any redhead or brunette (which is actually not true. More men still prefer brunettes over blondes asides from the fact its much easier to have sex with a blonde). The results were as follows:

Why all the blonde jokes?[edit]

The jokes about blondes have been made by Chuck Norris. This is because he wants to confuse His enemies. The plan is to make people laugh so bad, that they might die from it. So far, the plan has been successful, as we all can see. People laugh much about it. Let's just face it: the jokes about blond bimbos are funny enough because its all true. Therefore some blondes have now started to work on their intelligence, but studying hard in turn has made them more sexually frustrated(a sexual side-effect genetically common among all blondes). Their secret headquarters is stationed right under the South Pole. Actually, they had planned to place it on the North Pole, but they did like Columbus, and went the wrong way. The reason why they forgot and went opposite direction to the North Pole, was because all blondes share the same problem of Intoplarictoriphimucousitis, which is a rare illness among non-blondes that causes massive losses of brain cells.

Why are blondes so dumb[edit]

The truth is, blondes' boobs practically control them. The reason they are so dumb is because when god made them, he installed a special chip. This chip "controls" how fast their boobs grow (if it malfunctions then they get plastic surgery to make there boobs bigger). Here is how it works: A blonde is asked, "How many sides are on an octagon?". Before she can say the right answer, 8, the chip in her boobs redirects her. She shifts from side to side, moving her boobs and trying to act seductive. Moving them also helps the chip work better. This is what she is now thinking: Well, an octopus lives in the ocean. The ocean is blue. There are 4 letters in blue. So her answer would be 4. This is how the chip works.

90% of blondes have ADHD or ADD