“"They live in pitiful hovels which they set up far apart from one another, but, as a general thing, every man is constantly changing his place of abode."”

~ Procopius of Caesarea on actual economic situation of Slavic nations.

““When they enter battle, the majority of them go against their enemy on foot carrying little shields and javelins in their hands, but they never wear corselets. Indeed, some of them do not wear even a shirt or a cloak, but gathering their trews up as far as to their private parts they enter into battle with their opponents.””

~ Procopius of Caesarea on on modern slavic military industry achievements. 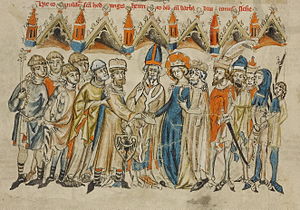 A poor Slavic knyaz is again marrying an ugly but rich Westerner lady for improve his own wealth. We can also see an example of typical, barbarian, Slavic haircut: too few hairs in the bottom and too much hairs at the top.

Slavs - are the largest group of peoples living on the borders of Europe speaking very similar, but utterly chaotic, incomprehensible and complicated languages. They live in Central Europe, Eastern Europe, Southeast Europe, North Asia, and in all the places where a good plumber is needed. The natural slavic environments are dark forests and steppes with the average temperature near -20 degrees Celsius, and with pay less than 20 Euro per month. The slavic brotherhood is so strong, that they try, from time to time, to create an one, big, slavic country with their neigbours, mainly with the help of hard negotiations tactics.

Slavic culture is mainly based on dances that are composed only of jumps and knee bends and on vodka. Slavic people have also invented a type of very high and hairy hats, used for dusting the ceiling in slavic flats. Slavs still remembers time when they were half-nomadic tribes, and from this reason they often move with all the family on casual directions, but predominantly on the west direction. Those people are nearly 70% of slavic export. 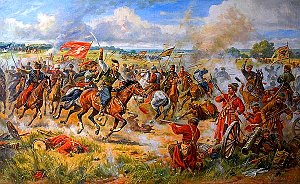