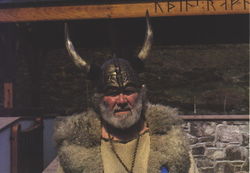 For those without comedic tastes, the so-called experts at Wikipedia have an article about Norsemen.

Known for their anger and smell, Norsemen (usually termed Scandinavians in post-12th century contexts) roamed Europe for thousands of years pillaging until they were satisfied — in the life of a Norseman, it was pillage for what you wanted and not what you needed. Their villages, or mounds of dirt as they now are known as, were so sickening that other villages in the surrounding areas were taken down and moved. It was finally in 1942 that the Norsemen were overrun by Nazi Germany. Following the war, Norsemen were sold as slaves and forced to work in sweat-shops in China. Norsemen have been striving for their rights for the past ten years. Finally on May 17th, 1993, President Clinton passed an act which gave Norsemen the right to vote as well as the right to leave the sweat-shops.

During the era before Christ, thousands of fairies roamed the area known today as Scandanavia. These fairies were prefect in everything they did which caused their pixie neighbors to become envious of them. Finally, in 793 B.C.E., the pixies cast a magical spell turning all the fairies into hideous and ugly men. The men were smelly, dirty, and their face was so hideous they had to mask it under their helmets. The men, now known to be Norsemen, sought out revenge by pillaging the surrounding country. Historians have had a very easy time tracing back the paths of the Norsemen on their raids. Due to their stench, wildlife in that area was stunted or sometimes even killed off. Norsemen have also been found in many famous battles throughout the ages.

During the Crusades, the Norsemen were used as front-guard causing them to sustain the most casualties during these Holy Wars. Still back at home, Norsemen continued to pillage the surrounding area.

During the Napoleonic Era, generals saw the potential effect Norsemen could do in battle. It was then for the first time, Norsemen were taught how to use the gun. However, results at the battle of Mersailles were devastating. Many of the Norsemen lost in the battle ended up shooting themselves during the act of trying to reload.

World War 1 was the next time the Norsemen were heard of in the historical documents. The Norsemen were employed as mercenaries for the French and forced to fight on the front lines in trenches. During the battle of Flander's one German soldier reported "a large wave of smelly men" attempting to rush the trenches. Norsemen casualties during this war were the highest yet. In fact they were on the verge of extinction. Yet World War 1 had taught the Norsemen the "power" of hygiene and how to use a bar of soap.

During WWII, the fierce band of Norsemen were finally conquered by Nazi Germany. However, they did not lose in vain. Out of the 534 casualties on the German side, over 300 were pronounced dead due to exposion to the deadly stench from the Norsemen. Following the war, Russia took control of Germany and shipped the remaining Norsemen to work in sweat-shops in China.

Lance Davenport is known for his trademark "Norweigan Death Grip." Just like Spock's "Vulcan Death Grip," it causes instant death to the recipient. Anthony Desalvatore has been known to have said the metaphor, "Lance's deathgrip is to pain as David Song is to man-crush on Peyton Manning."

Anthony Desalvatore, commonly referred to as Anthong the Thundercat, is known for his infamous Norweigan Cock Grip, which Lance Davenport often has the pleasure of experiencing.

Although the Norweigan Cock Grip is known to kill, the only two people who have survived it are Ethan School finding pleasure in the grip of a firm cock, and Brian Weinberg known for having a "Ginormous DeSalvatore Loving Rock Cock."

Norsemen and the Sweat Shop[edit]

Norsemen first arrived in China on April 7th, 1948. The arrival of these men wasn't pleasant. Forcing the Norsemen to remove their helmets, 7 Chinese workers were killed upon sight of the hideous faces. From that day forward, Norsemen were required to wear plastic bags over their face. Their stench was another problem that was put upon Chinese scientists to solve. They learned after attempting to clean the Norsemen, several of the men suffered from lack of stench and dirt. So scientists invented the "Super Smelly Suit" for the Norsemen to use in the factory. Norsemen were forced to work almost all day in the shops leaving time for only 3 hours of sleep and a 15 min. lunch break. During the 1980's, the Norsemen pushed for better rights and treatment. On May 17th, 1993, President Clinton compromised with the Chinese government to give the Norsemen basic rights. These rights included voting rights as well as the right to leave the sweat-shop and own their own house. The Norsemen continue to live in China today as regular citizens.