For those without comedic tastes, the self-proclaimed experts at Wikipedia have an article about Weeb. 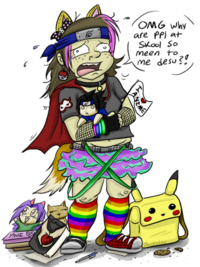 Wapanese (more commonly known as Weeaboos, Otakus, and Cosplaya-san; Japanese: 糞便の巨大な塊 lit: "dungeon troll"' or “huge mass of feces”) are socially-awkward people obsessed with anime or anything about land of the rising doody who, by means of thoroughly warped postmodern acculturation processes, have decided to act as if they were Japanese. The term "Wapanese" is analogous to wigger. Strangely, Weeaboos are idiots when it comes to Super Sentai Series, Kamen Rider, Ultraman or related Japanese franchises, because “they aren’t kawaii enough uh uh!” and they enjoy slurping Rothschild Fox 4Kids Power Ranger doody dump butt fudgsicles.

Weeaboos are to anime as Trekkies are to Star Trek, the difference being they are far more prominent online. A self-proclaimed "otaku" can be identified on LiveJournal by their numerous posts full of anime-related quiz results and/or delusional rants about anything that has even the slightest possibility of being anime-related. [[File:HiHi.JPG|125px|This is What!Puffy AmiYumi Looks Like! In the '90s and 2000s, being a weeaboo reached its fever pitch as an embarrassing teenage fad. However, in the early 10s, it died out to make way for bronies. Later, being an "ironic weeaboo" became popular (e.g. saying "Senpai, notice me" or considering Cory in the House to be "the best anime ever"). Nowadays, "weeaboo" has become synonymous for participating in anime culture, though basement-dwelling wapanese are still out there, albeit far less noticeable on account of more people using the Internet. 

For those without comedic tastes, the so-called experts at Wikipedia have an article about Wapanese.

Weeaboos are smelly, furry, plump creatures that are usually found in their natural habitats: their own mother's basements or in their dark rooms where the only sources of light are the bright glow of their computers or television. The word "otaku" is commonly mistaken by stupid Americans to mean "lovingly devoted", but means in Japanese "scary, pale, sociophobic pedophile who needs a padded cell". No matter what race they originate from, weeaboos quickly become whiter than sour cream due to lack of sun from watching stinky smelly girly anime or surfing Gaia Online all day.

Weeaboos sit in their wage slave parents' basement or room all day, watching Japanese cartoons called anime. These shows usually feature one or more of the following: half-naked teen girls with oversized pupils and gross bowling ball breasts, a sword-wielding guy with crazy hair, or fiery laser/giant robot -induced explosions. An angered weeb has acidic venom, however, this rarely happens, as they do not spend much time around anyone who annoys them, nor do they spend much time around anyone who isn’t Japanese or a Weeaboo dungeon troll in general. Their choice of food is chocolate cornets, konpeito, sushi, chicken katsu, instant ramen, Hi-Chews, the droppings of Pikachus, and Pocky.

Whilst weeaboos may seem to converse in Pseudo-Japanese, they are in fact talking in a nonsensical stream of mindless babble which means nothing in any language. This lack of ability to speak any language offends all other cultures and civilizations. Specifically angered are Japanese Language students, who (after spending years of diligent study to converse in Japan's native language) are angered to the point of distraction by weeb-ese speakers.

Basically, you're a weeaboo if you fulfill two or more of the following defining traits:

Otaku, in its literal sense, means "honourable house" and used to be very polite term for people who are relative strangers; in the fandom sense, it was lightly insulting and used sarcastically in Japanese because it involved using a cold honorific on obsessives who probably don't deserve it, kind of using the phrase ironically. But Japanese people are all amnesiacs and require constant reminding of who they are anyway.

Originally referring only to train-spotters and the like, the "house" part has caused it to drift into also being used as a heavily derogatory term for basement dwelling virgin geeks who don't leave their houses, kind of hinting that it also refers to hermits. This was mainly because it was discovered that a suicidal serial child rapist in Japan sometime last Thursday had an extensive collection of lolicon and only ever left his house to get more. It is generally written only in katakana, to distinguish it from the non-derogatory use of the word, and to emphasize the fact that only stupid foreigners would ever take pride in such a label.

In the normal western perspective, being an Otaku incorporates certain characteristics of weeaboos at moderate levels. Less hardcore than weeaboos but more fixated than the typical anime fan, Otakus fulfill two or more of the below defining traits:

Still, though, the healthiness of being an Otaku is questionable.

In Malaysia, the term "otaku" also means a pedophillic anime freak. The local typea are easy to spot; just show the otaku a few pictures of girls and ask it to choose one, the selected is sure to be the most underage. One Malaysian state, Melaka, has become a particular breeding ground for these creatures.

A weeaboo is usually seen wearing a T-shirt of a classic anime (like Dragon Ball Z or Ruroni Kenshin)—or better yet, one that still hasn't made it to American shores. They are also usually seen with messenger bags, embellished with anime logos, like Full Metal Alchemist, which are usually bought at Hot Topic. These bags are adorned with pins and key chains which are supposed to represent their personalities and interests without actual need for socialization. Most of them wear glasses for all their time spent playing video games, and those that don't, just buy them to upkeep the appearance. Sometimes, weeaboos may even cosplay when not intended in the style of their most favorite anime (This has been seen more often thanks to Naruto and Hot Topic). In terms of footwear, even though in the old days, most otaku were seen wearing sport foot wear, these days it is more common to see them wearing Converse or Vans footwear.

Weeaboos can also be easily spotted together if they are "speaking Japanese" in a group. They usually mutter it because they really have no idea what they're saying; for example, when a weeaboo thinks they called you a "Dumbass" they actually just said "I'm a person without a life and I pretend I know japanese stuff just to feel welcomed by a group of pimple- faced fat kids"

The otaku Goddess is the Hermaphroditic Haruhi Suzamiya, and they follow an ancient evangelical scripture called the Neon Genesis Evangelion. They worship their god by writing poetry and producing fanart for this creature. It is also customary to don her dress at anime conventions.

Recent years have shown an extreme increase in otakuitis-infecteds, and thus new religions and sects have been popping up everywhere. The Great Goddess of Armageddon is currently one of the more popular gods believed in by heathen otakus.

"Mai Waifu" is a weeaboo phrase literally not meaning "My Wife" in Japanese. The phrase originates from a scene from Azumanga Daioh. A "waifu" is an anime character that a weeaboo feels a special attachment to and "claims" her as his/her own. Some find waifuism to be unhelahty and a sign of a basement-dwelling neckbeard; others argue it is a wholly fulfilling lifestyle.

The female/gay equivalent of "Mai Waifu" is "Mai Husbando", because weeaboos are illiterate in both English and Wapanese.

GUYS, get someone if you are in this type.

Recent studies by leading biologists at the International Organization for the Studies of Anime Physics and Physiology and Related Concepts Including Otakus (commonly abbreviated IOSAPPRCIO) have suggested a new mental disorder to be named, titled otakuitis. All of the symptoms listed above would be considered the official symptoms.

As of now, there is no known treatment for otakuitis. But until a cure is found, we suggest anything along the lines of exorcism.

A Wapanese in Japan. Note: the two Japanese businessmen are really talking trash about the said Wapanese.

Typical punishment for being Wapanese.

other symptoms of otakuitis include.

1. calling someone Konichiwa when thier name is actually Kaneesha.

3. cosplaying as a normie.

4. and fucking everything you see.

There is controversy that otaku actually have two genders instead of one: Male and Female. Female otaku are usually believed to be adorned with black clothing which they usually purchase from Hot Gothic. They like to take two or more men that look like guys from an anime or manga and write fanfiction and produce fanart of them having intercourse; this is also sometimes referred to as yaoi. These otakus of indecisive gender are commonly referred to as fangirls, or in Japanese "腐女子", meaning "Rotten Girl".

Something which stays true to even this case, as the seiyuu Chihara Minori, known as Minorin to her fans, became the victim of a stalking Otaku who ultimately was after her water bottle.

The entire event took place at the recent Daicon anime convention, held in Melaka, Malaysia. Minorin, who was there for a singing appearance, was completely unaware of the predator around her, who had seen her drink out of a bottle of Evian mineral water. When it was left “unattended”, he seized his chance.

In the world of those who never really had their intimate moments with the opposite sex, a moment like this is highly considered as a chance to have a one-on-one session of indirect kisses. The proud Otaku was enjoying himself to such an extent that he exposed both his story and photos of himself having a most depraved sexual relationship with the bottle which had once touched the lips of Minorin, on his blog.

It seems Minori herself is as yet blissfully unaware of this liquid theft, though with the propensity of such scandalous news to propagate wildly across the Internet, true fans can only hope that she be spared from the knowledge of just where her fluids ended up.