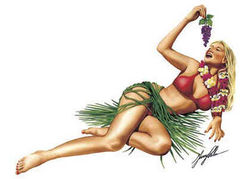 Poontang is a punch made from the fermented juice from the rare, very bushy poonberry tree. It became immensely popular during colonial times, when it was a firm favourite amongst the Founding Fathers, drunk constantly by George Washington, as evidenced by his farewell address, I only took the job for the poontang. The first known mention of the word "poontang" was in a 1674 issue of Ladies' Home Jounal when it documented the adventures of up-and-coming golfer Grizzly Adams "...it seemed that all Grizzly wanted was some of her sweete, sweete poontainge...." It quickly spread from one town to another, the first recorded recipe was printed in Ye Boston Globe. It was widely regarded as "fahkin' retahded" and poontang became widespread.

Unfortunately, poontang's immense popularity was later learned to be the result of addictive qualities. Those who get a taste of it will become single minded maniacs in pursuit of more. The hunger for good quality poontang is said to have made a Bishop kick a hole in a stained glass window. Those who cannot get a fix will often take matters into their own hands, with disastrous outcomes. If a poontang addict cannot locate a steady source, withdraw will occur, leading to unappealing physical and mental consequences, including blue balls, hairy palms, and lack of mental clarity. The prescriptions of poon addiction suppressants are currently on the rise and has even outrun the sales of paracetamol and nicotine patches. 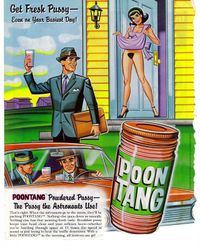 Who can get enough!

Recent studies have shown that Poontang actually has a range of odours from pleasantly pungent to disgustingly rancid and fishy. The same holds true for taste - from an easy on the palate flavourful slightly acrid and salty delight to totally unfit to grace the table of any discriminating gentleman. The poontang market has recently been booming as a result of these studies as culinary chefs have began realising the gourmet potential of the poonberry. Worldwide poontang distribution company, Poon & Tang co. cultivated by entrepreneurs, Trisha Le Freegancore and Mary Jane Rottencrotch have even offered a range of flavours and poon products such as PoonPizza and PoonJuice.

The ancient Incan cultures valued the poonberry highly for its healing properties. An ancient version of poontang was given to teenage boys to aid them on the path to manhood. Often, poontang was offered to the Gods as a sacrifice to cure all maladies. This practice was incorporated into their religious rituals at regular intervals and for some inexplicable reason it was always a couple of months after the high priests visited the temple virgins to partake of the sacred poontang.

Today, poontang is found all over the world. Each area of the globe has its own special variety of poontang. Poontang from Southern America is full of spice and fire. Poontang from the United States of America is usually quite fatty. Asian poontang comes is quite salty, and very very fishy, though very healthy.