For those without comedic tastes, the so-called experts at Wikipedia have an article about Battle of Shiroyama.

The Battle of Shiroyama, also called The Last Stand of the Samurai, was a hasty, disorganized, miserable failure of a last stand initiated by the sparse remnants of samurai fighting in the Satsuma Rebellion, during the rise of Imperial Japan. The battle, or the disorganized slaughter that somewhat resembled a battle, was fought over the course of one whole day and one night, with Imperial Japanese Marines besieging one of the last, scenic castles on the mountain of Shiroyama. From a moral, noble, and symbolic view, the Last Stand of Shiroyama can be viewed as a brave, noble, and dignified battle, with a group of samurai who followed their code so fiercely they were willing to defend it to the very end. From any other point of view, take for instance in military strategy, coupled with some historical context and hindsight, it was a feeble, frustrated, utterly pointless last resort for group of aging men with an out of date warrior code that was bound to fail eventually. 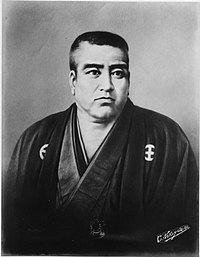 Saigō Takamori (center). Left right behind him, almost invisible here but quite distinct[1][2][3][4] in a Xerox™ of the negative, is one of his legendary farts.

The Satsuma Rebellion was a series of battles fought between the Imperial Japanese army and a group of samurai who had grown tired of the ruling dynasty. They were led by Saigō Takamori, who was tired of the economic and cultural prosperity of Japan at the time and wanted everyone to dress up in silly armor and go burn down a few villages for fun. The rebellion lasted from January the 29th, 1877, until the Imperial Japanese victory at Shiroyama. Already leading into the battle, the Samurai were considered a huge nuisance to imperial Japan, and the rebellion was dragging on for months at that point. Before retreating to Shiroyama, the Satsuma had attempted to besiege a fortress in Kumamoto. Saigō, leading with unrivaled tactical genius, had somehow managed to not only fail to besiege the castle – a terrible blunder in itself, his forces were far outmatched by the Imperial garrison not only in numbers but in technology – he also managed to lose 19,500 of his then 20,000 men in following skirmishes and from defections. This show of non-samurai-like cowardice from deserters, to the abysmal losses in battles, the Samurai were forced to make like trees and run like little pussies back to their lands, eventually digging in at Shiroyama hill.

Because the Japanese believed in the policy of a job done right, the Imperial Army sent to oppose the demoralized and undermanned Samurai was 30,000 men strong, armed with state of the art weapons, like breach loading rifles and ungodly large siege cannons. The opposing general Yamagata was rather hesitant however, probably because he still thought the samurai he was facing were going to be far more formidable than the reality of the situation, biding his time for an attack that would utterly demolish the samurai, and their slightly annoying rebellion with them.

Leading into the battle[edit | edit source]

A day before the the battle of Shiroyama, General Yamagata had approached the camp of the Samurai and presented the totally sane and not at all delusional men with an offer of unconditional surrender through a letter, which is roughly translated and slightly abridged in the text below;

Saigō, still not seeing the sheer indomitable hopelessness of his situation, had responded with his own letter. Historians still cannot agree if the following translation is entirely accurate, but the result of it remains the same regardless 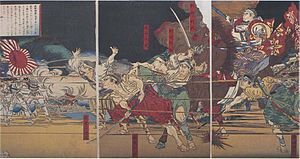 Remember: if all else fails, kill yourself.

Imperial Troops had encircled Shiroyama, and immediately started shelling the Samurai's positions, killing several samurai who, yanno, didn't expect the enemy to attack them. After shelling the fortress on and off throughout the entire day, on September 24th, at four in the goddamn morning, the battle started. Since the Imperial Marines attacking Shiroyama didn't use swords the men had little training in close quarters combat, and so when the Samurai charged their lines they quickly became disorganized. Saigō and his men however, were quickly forced to pull back, due to the gargantuan size of the imperial forces when compared to their own.

In the most deserved bout of Karmic consequences in the history of Japan, Saigō was eventually shot and mortally wounded, and his second in command Beppu went to preform the ritualistic decapitation of Saigō and his own subsequent suicide via disembowelment. However he never got the chance to do said overtly contrived ritualistic murder-suicide (though he did decapitate Saigō, so at least he got his just deserts) and continued to command the quickly dwindling Samurai forces. For five fucking minutes. He eventually charged down the hill and proceeded to get shot to death because he had a FUCKING SWORD COMPARED TO A FULLY EQUIPPED FIRING SQUAD. By the next morning of the siege, the samurai were pretty much shit outta luck. With no commander, no bullets, and a deficit of reason to go on, the remaining samurai did what they did best: drew their swords and charged into the enemy lines in a desperate suicide charge. It was slightly effective, the men able to kill one one-thousandth of the imperial forces (about thirty men.)

The end of the Battle of Shiroyama marked the end of the samurai class in Japan, the end of the Satsuma Rebellion, and a fuckton of insurmountable debt for Japan, about £70,000,000. Always remember; if you ever think something is useless, Japan nearly bankrupt itself in order to stop a revolution an entire fortress garrison could've defeated single handedly. It's debatable if there were any smart people in early imperial japan, and Shiroyama is a very good point in said debate.

In the end Saigō Takamori's excellent adventure was short lived, incredibly stupid, and only caused more problems for Japan in the long run. While nowadays he's honored and celebrated as a hero, a noble man willing to fight and die for a cause he so fiercely believed in, it was a cause that also cost him his very own life. And in hindsight, it could be argued his knowledge in military strategy was shaky at best and at worse ... well you should already know what it was like at worse. The Samurai who died on the hill of Shiroyama, perhaps knew it was the last battle they would fight. Perhaps they knew it would be the definite end of Samurai culture. Or, maybe they were just idiots who wanted to put a military dictatorship back in power without thinking of how exactly they would, or even if they could overthrow the imperial government. In the end, the silver lining of Shiroyama for the modern generation was that we got a Sabaton song out of it. And The Last Samurai, but that movie kinda sucked from a historical accuracy standpoint, but it had Tom Cruise in it so, that's sorta cool.

Featured Article  (read another featured article)
Featured version: 03 July 2021
This article has been featured on the front page. — You can nominate your favourite articles at Uncyclopedia:VFH.