The Spanish Armada was the preeminent team in the EFL (European Football League) from 1492-1588. The team first played in the city of Cadiz, in southern Spain, in 1492 after wealthy monarchs Ferdinand and Isabella, owners of the Aragon Catalans and the Madrid Castillians respectively, decided to finance a new team. That same year the last franchise in southern Spain, the Cordoba Granadas, was disbanded after Ferdinand and Isabella bought out the company that owned the Granadas, MJI (Moorish Jihad Inc.). With the founding of the Armada, one of the greatest dynasties in EFL history was begun. 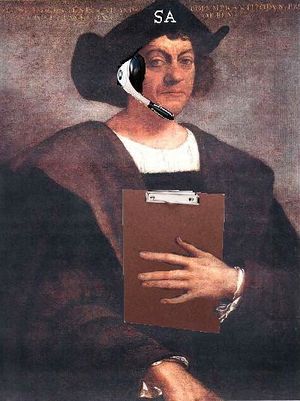 Just before the first season of play began, Isabella finally found a head coach capable of leading the team, a true captain of the sidelines, hailing from Genoa]], Italy. Christopher Columbus would take the helm of the Armada until 1504 leading them into the championships four times. Columbus is perhaps best known for being the first head coach in the EFL to implement the West Coast Offense . Based on the assumption that domination of the field could be achieved by running westward routes, the West Coast Offense would shape the game for years to come. His fellow coaches, especially the Portuguese, had run their plays to the East for years and told telling Colombus he was crazy to think he could dominate the field with these westward routes. However, Colombus shocked the league by successfully running the West Coast Offense and winning the Tazón Estupendo, in his very first year. During his tenure with the Armada, Columbus would lead the team to the Tazón Estupendo three more times.

In 1506, after their initial success tempered, the Spanish Armada encountered some major changes. After Ferdinand and Isabella passed away, ownership of the team was left to their daughter Joanna the Mad. However, Joanna had no love for football (and was mildly insane), while her husband Philip the Handsome was a huge fan of the game. She allowed him to take over full control of the team and retreated to her bedroom to bite the heads off teddy bears. Philip was the son of Maximillian, head of the Habsburgs, a wealthy conglomerate that controlled many teams across Europe. Immediately many die-hard Armada fans decried this as a "selling-out" by the team to more powerful owners in the league. These fans thought that the acquisition of the team by the Habsburgs would ruin the franchise. Although the Armada's success would continue for years, this new ownership would eventually lead to the death of the franchise. 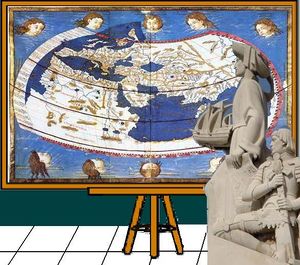 From the beginning of their very first season, the Armada had to deal with a team that would come to be their greatest rival, the Sagres Navigators from southern Portugal. The Navigators had been founded over 70 years before the Armada and had spent that time perfecting their game play. Their most famous coach, Prince Henry, had created the innovative East Coast Offense, basing plays on eastward routes. With this gameplan and stars like wideout Vasco da Gama and linebacker Bartolomeu Dias, the Navigators won many a victory against teams along the coasts of Africa and India.

Immediately after Columbus first demonstrated the success of the West Coast Offense, the Navigators began planning how to fill in their gaps and eventually exploit the weaknesses of the Armada. However, the commissioner of the EFL, Pope Alexander VI, immediately ordered a "line of demarcation" be drawn between the two teams, ordering them to play in different conferences (the Armada in the Novo Conference, and the Navigators in the Viejo Conference), thereby preventing either team from gaining a huge advantage over the other. This ensured that the rivalry would continue for many years, although never coming to a full fight.

Regardless of the division though, the teams would occasionally still come in contact. In 1500, the Navigators, led by quarterback Pedro Cabral, played a game in Brazil, clearly a part of the Novo Conference. However, the Armada was slow to find out and never filed a formal complaint with the commissioner's office. This rivalry would continue until 1580, when Armada owner Philip II bought out the holding company of the Navigators and had the team disbanded. Football would later return to Portugal and the memories of the Navigators would be resurrected, but only long after the Spanish Armada faded from its position of dominance.

With the Navigators relagated to the Viejo Conference, the Armada soon ascended to a position of domination in the league. They subdued teams around the globe and conquered entire divisions of the Novo Conference with there still-dominant West Coast Offense. The history of the team through the early 1500s became a constant progression of incredible talent with now-famous players bringing renown to the Armada and earning the period the nickname "The Spanish Empire."

In 1508, quarterback Juan Ponce de Leon led the Armada to a smashing victory over the San Juan Ricans. He captained the team until 1513 when he retired, never defeating his arch-rivals, the Bimini Floridas. The year before the next great star of the Armada joined the team: cornerback Vasco Balboa. He caught four interceptions in a game against the Panama in 1512, further solidifying the Armada'a staunch defense.

From 1519-1521, running back Hernan Cortes ran for over 5000 yards, smashing all previous records and bringing the Armada to 4 consecutive championship victories over the Tenochtitlan Aztecas. For the rest of the 1520s and into the next decade, the offense was spearheaded by tight end Francisco Pizzaro, whose incredible blocking silenced defenses around the league. In a 1532 game against Cuzco Incans, Pizzaro laid out star Cuzco linebacker Atahualpa with a bone crushing block, delivering a major concussion to the hapless defender, ending his career. This incredible physicality became the hallmark of the Armada during "the Empire." 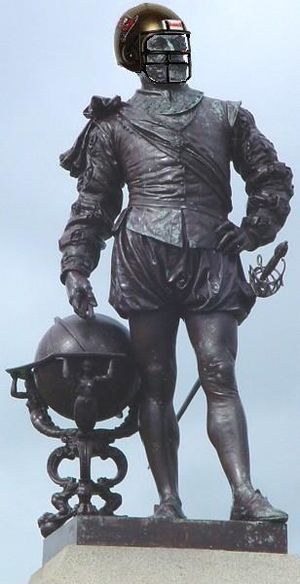 Even with the immense power the Armada had built up, it soon became evident that they were vulnerable to new tactics. In 1563, a new team joined the Novo Conference. Led by the incredible quarterback Francis Drake, the English Sea Dogs would soon become the greatest enemy the Armada had ever clashed with. Drake would exploit a weakness in the Armada's defense he referred to as the "Spanish Main". He saw that the Armada's secondary was often spread out in a long thin line, allowing him to run quick plays (which he called "raids") over the middle. This style of play repeatedly embarrassed the Armada throughout the 1560s and 1570s, leading to an increase in fan apathy and an overall loss in profits.

Francis Drake was also well known for his exploits against other teams in the Novo Conference. In a game against the Tierra Fuegos, Drake ran a modified quarterback sneak that allowed him to split the line and break down the field for a 96-yard touchdown. This play that so easily overwhelmed the Fuegos became known as the Drake Passage. In another game against the America Pacifics, it is rumored that Drake scrambled from the pocket and ran across the backfield for a full 3 minutes and 44 seconds (over an estimated 1120 yards) before finally completing a touchdown. This became known as Drake's "Circumnavigation of the Field". 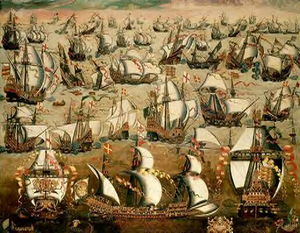 An early encounter with the English Sea Dogs at the 1582 World Tournament.

In the 1580s the Armada found themselves in financial trouble with repeated weak finishes in the playoffs. Even with the previous acquisition of the Navigators, the Armada still faced a declining fan base. Owner Philip II decided to move the team up to Coruna to tap a new fan base, but this proved fruitless. However, a prolonged argument with an old crush, Elizabeth I, commissioner of the English Conference of the EFL, gave him an idea. In a last ditch effort to rally support for his struggling squad, Philip challenged Elizabeth to bring her teams into huge tournament to fight for gridiron supremacy along the eastern Atlantic. He figured that the superior firepower of the Armada's offense could take on anything the English opposition could throw at them. Philip, however, neglected to recall the Armada's repeated embarrassments at the hands of Francis Drake and his Sea Dogs and didn't anticipate the problems that would arise facing the fiesty English squads. 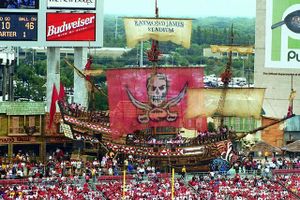 A scene of the English crowd at the final game between the Armada and the Sea Dogs.

In 1588, the Armada left for the tournament in England, which would sadly be their last games. After some initial victories against pitiful teams like the Portsmouth Pirates and the New York Giants, the Armada came up against their greatest rival of the previous 50 years, the accursed English Sea Dogs. The Sea Dogs were still the same small, quick team, but were now led by their wily backup quarterback Peyton Manning. (Drake, their usual captain, was sidelined a few hours before the game when he slipped on a patch of ice outside the stadium and suffered a concussion. This, his 8th concussion, would soon end his impressive career.) As the teams met on the gridiron on February 5, 1588, it soon became evident that the Armada couldn't keep up with the agile Sea Dogs. No amount of strength or intimidation could break apart the quick screens, play actions, and flea flickers Manning continuously ran. The Armada were chased all around the field, and finally had to surrender the game after a fire was started behind their benches. The dejected team decided to quit the tournament and quickly left for Spain after the game. However, Philip ordered them to play in their final game of the tournament, a match in Scotland against a college team, the Miami Hurricanes. The Armada was again embarrassed, suffering innumerable injuries and essentially getting destroyed on the field. Philip, seeing all his hopes fall flat before him, had no choice but to disband the team. After 96 years, the dynasty of the Spanish Armada came to a crashing halt.

Ironically, although second-stringer Sea Dog Peyton Manning would go on to be one of the greatest quarterbacks ever to play the game, he never would make it to the Super Bowl. So awed by the power and majesty of the Armada's play, he began operating an Armada-style high-powered offense and would never again run the quick, deceptive plays he was so well remembered for. Manning is perhaps best known for his career with the Indianapolis Colts from 1688 to the present day and the long-range passing offense he runs with the team.