The Spanish version of the Honey Monster.

For those without comedic tastes, the so-called experts at Wikipedia have an article about Francisco Goya. 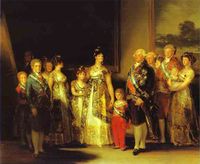 King Carlos IV and his family. Goya tries his hardest to get fired with this painting but his clients don't see the joke.

Goya showed early bushy tailed talent as a dab hand at dabbing on the paint. His first paintings..well no one really cares about them as they weren't very good. He sold most of these to religious institutions, especially to nuns who wanted a near naked Christ dangling over their altar. After some partying in Rome to increase his contacts, Goya got the best paying in Spain when King Carlos III hired him as Artist in Residence to the Royal Family. Goya accepted the job, painted one picture of Carlos III before the latter died after putting too much white lead in his pigtail.

The new royal patron Carlos IV accepted the arrangement and let Goya to paint him and his family. What they showed were a family of inbred mental defectives with the stupid King at the head. Goya hated this part of his job, progessively painting Carlos in a variety of absurd poses to get out himself fired. When that failed he made Manuel Godoy, the effective Prime Minister of Spain, also look equally stupid and hinted at the common gossip that Godoy was humping the Queen every time King Carlos went hunting. It was becoming something of a desperate time for Goya. It is around this time he lost his hearing too. He wrote to Beethoven in a series of letters that became known as 'The Dialogue of the Deaf'. The letters were published, though as neither Goya or Beethoven spoke the other's language and had to use base French, these letters are now considered as fakes to discredit both men.

Looking for another career, Goya studied anatomy and resolved to make a new living as a surgeon. His friend the Duke of Alba volunteered one of his mistresses, a woman called Maja from Brazil. Alba said that Maja was hotter than the Amazonian rain forest and was trying to promote her new 'Venus Trim'. He also said Maja was unhappy with her 'washboard' figure and wanted some artistic improvements. Goya agreed.

Goya took to the commission like an enthusiastic amateur. Maja was patient as she watched Goya apply different layers of paint to her body and then asked her to stand in the window to dry. Only then did he start the painting. After some colour mixing problems, Goya was finished. However in his excitement with the project, he had forgotten to do the 'before' and 'after' paintings as requested by Alba. So Goya tried to wing it by painting two identical versions of Maja. One with a matt finish and the other glossy finish. Alba was happy with the paintings but wondered why Maja was staying away from his bed for 48 hours.

The pictures were revealed at a private party held by Alba and friends. Since they were all buttoned up Spanish aristocrats, none of them had seen a naked woman except by a flickering candle light and were shocked to see Maja's nudity wasn't in some lame 'classic' pose but lying on a couch with everything on open display. Alba liked the paintings but a few years later the Spanish Inquisition got hold of them and held them in a secret store room for 30 years. It was said that when the paintings were rediscovered, there was some surface damage on the nude canvas only. What this damage was and who - or what - had caused it was covered up at the time. Restorations of the paintings since then make it hard to detect the area affected.

Maja wasn't so impressed and sued Goya for malpractise and misrepresentation. Worse still, once the paint flaked off she was back to her 'fried eggs' and by then Alba had replaced her as his mistrees. It is alleged Maja later invited Emperor Napoleon of France to come in and restore her honour, though she managed to die from paint poisoning (white lead again) before the French could arrive. 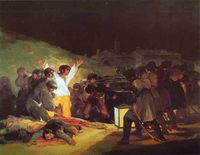 'So shoot me that I can't make an expresso the French way!!

Goya was still dabbling with his surgical spirits when news that the French had invaded. It was all a bit confusing as they said they were on their way to Portugal to give them a kick for supporting the British. So Spanish customs let the French in. But Napoleon had some sneaky plans. He challenged King Carlos to a game of chequers and won. The prize was the throne of Spain and the entire Spanish empire. Napoleon decided there was no other fit member of the Spanish royal family who could take over and so modestly awarded Spain to his elder brother Joseph.

In Spain the news was treated as a great insult. Had not the Spanish recently fought with the French against Admiral Horatio Nelson at the Battle of Trafalgar and seen all their ships sunk? In Madrid anyone who looked French was mercilessly teased and their clothes burnt with the same vigour the Spanish Inquisition treated heresy and mockery. Goya who knew the truth about Spain's monarchy and the aristocracy, this was welcome news. Perhaps at last he could drop his surgeon's mask and go back to painting for a new client.

The French rolled into Madrid and took revenge on the insults. Anyone refusing a glass of cognac in honour of 'Real Jose' were put up against a wall and shot. Goya recorded the scenes in full detail, though for his own political reasons, he chose to depict the people to be about to be executed as rather thick looking and possibly stupid. Heroic it wasn't.

One of Goya's gayer pictures.

Goya's political sympathies were with the new regime. It proclaimed the Rights of Man and abolished the Spanish Inquisition and the regular sunday afternoon 'Auto de Fe' which, despite's it name suggesting a car race, was the ritual roasting of undesirables under the banner of the Apostolic Monarchy and the Holy Mother Church. Unwisely, King Joseph failed to come up with alternative entertainment and this made the regime unpopular. Added to this, the British had sent their rubber booted Duke of Wellington to Spain to 'stick it up to the French' which saw a regular story of confusing battles, brutal murder, atrocious torture and general point scoring against that neighbour who had always annoyed you with a loud donkey.

Goya happily painted when commissioned but didn't land 'the big one' by painting the King. Perhaps Joseph had looked at Goya's work and decided he didn't want to look like a royal chump like them. Whatever the truth, when the Spanish and British took Madrid, Goya wasn't shot as a traitor. Instead he got to paint the Duke of Wellington who put him under his personal protection. His only request was that Goya give up on his other hobbies and stick to painting on canvas, especially the chocolate box, happy and funny paintings he had done before.

With the war finished, the new King of Spain Ferdinand VII wanted to return Spain to pre-1808 and that included reconquering Spain's rebellious colonies. Goya once again tried to hustle for work but Ferdinand refused. Not so much for Goya painting him like a royal retard but that Goya had been to close to Godoy and others who Ferdinand blamed for failing Spain. Goya took the hint and moved to France. There his work went increasingly darker and darker until it became indistinguishable to a black patch on a canvas. Though this would be the style of later 20th century artists, Goya was too ahead of his time. His last recorded message was to Beethoven asking how his symphonies were going, unaware his old pen friend had died a few months earlier.

His name. Goya is easy to remember and pronounce correctly. Try Velasquez for example...