From Uncyclopedia, the content-free encyclopedia
Jump to navigation Jump to search
“ I don't really like Madrid... people there like to wash themselves”

Madriz, known as Madrid by foreigners and anti-Spaniards, is the glorious capital of the Roman Catholic Empire of Spain. Founded by Lorcan Kennedy,who often goes under the alias of 'Harp'in 2002. The current prince of Spain Evan Lester is currently in control of the city and can be reached on Wednesdays from 6.30 to 9 ish and saturdays from 6 o'clock onwards. It's €35 euro to chat with him for the year and to cover you for any injuries that may occur.

The population of Madrid varies widely with the time of day, the day of the week and the month of the year. While during weekdays in mid-summer the population is estimated to be 35,071 (all of them crammed in El Corte Inglés to enjoy the air-conditioning), on saturday nights the amount of people in the streets, pubs and discotheques aproaches 3,228,359, all between the ages of 15 and 27. Couple that with the local Fiestas in honour of the patron saints and virgins (in Madrid? Hah!), when everybody has a right to get drunk on the streets, and we are talking about a number rivalling the population of China. It is estimated that if every Madrileño on the streets during the Fiestas were to jump at the same time, the amount of vomit they would throw up would be sufficient to cover Texas 42 cm deep.

However, notwithstanding the party-going-boozing-and-fornicating attitude of the Madrileños, it is a city with a great many Christian churches and parishes (it even has 17 cathedrals, one for each patron!). The number is so high that the amount of land taken up by them can single-handedly explain the lack of available housing for young people in Madrid. This might also explain why they spend all night on the street instead of going to bed and letting the rest of us have a good night's sleep. In chain, this is probably the reason for the endless siestas and the fact nobody ever gets any work done in Madrid. The Church-State rejects these claims and says that what these unruly youngsters should be doing is going to midnight mass instead of partying. This in turn would let people sleep, avoid the siesta and increase productivity 120%. So right.

As capital of The Roman Catholic Empire of Spain, Madrid sits in the exact centre of the country (probably placed there by God Almighty Himself), and respected physicists such as Federico Jiménez Losantos and José María Aznar have consistently proposed that Madriz is also the exact centre of the Universe and primary newtonian reference. Certain fringe theories in Physics, such as "Relativity" by some German guy claim this is not possible, as there is no Universal frame of reference. This theory is currently discredited, as "Relativity" sounds suspiciously like Relativism, and, in the sublime words of Aznar: "Cultural relativism is an illness brought to us by left-wing intellectuals". So take that, Relativity. Besides that, the German guy who proposed it was a Jew. Jews, Masons and Americans have always hated Spain.

If Spain was a donut, Madrid wouldn't exist. 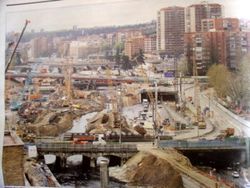 Madrid, being set in it's current (and hopefully last) position.

Madrid was founded by Pharaoh Al Bertorruis Gayardén, in 3500 bC, and is notable for not having been officially inaugurated yet. The observant tourist will notice that works have not yet finished, due to frequent delays. Some of these were due to the difficulty of keeping Madrid in the exact centre of The Roman Catholic Empire of Spain, as the country gained and lost territories. Moving the whole town repeatedly was a large burden for the Empire, and its fall can be attributed to the expenses. By 1975 the map seemed pretty stable, and the final foundations are being laid as can be seen in the attached image.

On 2005 US Armed Forces invaded Madrid, responding President ZP decision to withdraw from Irak and avoid standing up as the US Flag passed by at the Military Parade of 12th October 2003. However, the US Forces immediately withdrew from Madrid due to the complete destruction that the M-30, known as Calle 30, caused to Madrid infrastructure, making impossible any chance of entering the Capital. As the soldiers came by, US General Mr. James Bush declared "We are not the first...".

Mayor Gallardón, after the destruction of the road infrastructure of Madrid, started a new project called "Gallardón Colosus", a gigantic statue in the middle of the city representing himself, of 2.000 metres long, being the only construction seen outer space. Mayor Gallardon stated "Madrid citizens are now proud to have the biggest urban statue in the world, after the Bush statue in Washington D.C.".

Although Madrid used to be on of the premier shopping capitals of Yurp, there are now only two kinds of shop in Madrid: the Chinos and El Corte Inglés. Chinos can be easily recognized as they all have the same sign, with red lettering on a yellow background: ALIMEИTACÍON Y FЯUTOS SECOS.

Madrid Zoo and their Pandas[edit]

Because of the Panda's attitude towards sex, humans had to step in: These twin pandas (http://www.zimbio.com/pictures/mm_AkqQsBt7/Panda+Twins+Born+Protection+Research+Centre/_iKghpXSe4i) were conceived through artificial insemination in a joint effort by Spain’s National Research council and scientists from China. Because the pair of Pandas that the Madrid Zoo has were “just too lazy to have sex with one another”. And yes the human mother, the surrogate, carried them for 5 months before she had to have a suzerain to take them out. She was very upset as she said that she grew attached to them. Dr. FongKong from the University of Nookie believes that "It is natural for any mother to feel for their child, even if she is Cuban and they are half white and half black". Dr. FongKong did not even bring up the different species issue as he felt “she is an idiot, how do you think they get her to do it. If I went into specism, she would die from TMIAO”. TMIAO or TO MUCH INFORMATION AT ONCE is a deadly disease that affects all idiots. The mother, Suzy Snow, believes that she will be reunited with her children one day. Miss Snow is now trying to raise funds to have a species change.

The nightlife in Madrid is varied and fit for all preferences. The main areas for going out are Argüelles, Moncloa, Malasaña, Chueca, Alonso Martínez and Huertas. Each of these areas feature a different style of prevalence, and your choice should depend on the reason you want to be beaten up that night. In Argüelles you will get stabbed for not being South-American, in Moncloa you will get kicked on the ground for not being a Nazi, in Malasaña you will get broken glass thrown at you for not being Anti-Nazi, in Chueca you will get ass-fucked (don't ask why) and in Alonso Martínez you will get punched in the face by accident in a drunken snobs brawl. Actually, no-one will attack you in Huertas; that is because nobody goes there.