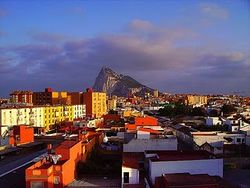 Looking south towards freedom and democracy 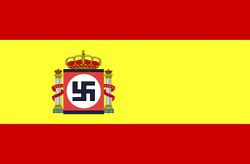 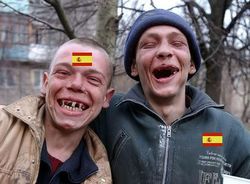 The happy people of La Linea

La Línea de la Concepción (often referred to as that dangerous shit-hole over the border from Gibraltar ) is without a doubt the biggest festering turd of a town in Spain . La Linea as it is known 'affectionately' in its short form, is unfortunately, located in the south of Andalucia, bordering the British territory of Gibraltar (you know, Gibton-upon-sea, where the Monkeys are from). Many theorists have stated that a more suitable positioning of La Linea would be either next door to Tripoli, Libya or somewhere in the Helmand Valley, Afghanistan. This author however, deems these two places far to civilised to accept La Linea, or more precisely the people (and I use the word, people, loosely) of La Linea into their ranks.

La Linea was invented by the Spanish about 24 hours after they were kicked out of Gibraltar for daring to wage war against the British. On August the 13th 1704 just before siesta time a tree was planted by the then King of Spain, Felipe V in the swamp that was to become the glorious town of La Linea. The name of La Linea is derived from the Spanish word for The Line. Clever huh? - See Education in La Linea

La Linea was the base for the siege against Gibraltar that is still going on to this day. The Spanish army (all 5 of them) are currently on a peacekeeping mission to Ibiza, so their place has been taken by members of the Guardia Civil - who think they are all Rambo, and have attitude problems.

Back in 1704 most of La Linea's slum housing stock was built. If you visit the town today you will see little has changed, it's still just as shit as ever. The 1960's brought a futuristic slant to La Linea with (the very few beautiful, neoclassical) buildings of the town being torn down, to be replaced by some fantastic concrete edifices.

The story of La Linea is one of envy (of Gibraltar) and incompetence and caused corruption by the jumped up potato farmers they elect as mayors.

Generaly students in La Linea leave school at age 12, so they can have children if they are female, or get busy in the ever growing tobacco import business if they are male. The ability to read and write is not seen as an important issue, as long as they can recognise the words 'Winston' and 'Chesterfield' on packaging. This lack of schooling is evident in the aggressive, and generally pig-shit stupid population of La Linea. They do seem however, to be able to obtain driving licenses, as a result driving in La Linea is deemed a very unsafe practice and should be avoided at all costs. 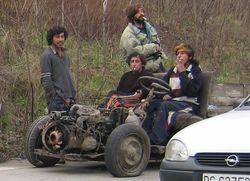 A trip to the beach in La Linea is an interesting experience. On one hand you have the chringuitos, which are great places to spend the afternoon at. However, on the other hand you have the local males of La Linea, whose job it is to drive along the beach road really slowly looking for one of their cousins that they haven impregnated yet. Local wisdom says that if you want to go to the beach, head for Tarifa, it's far better. 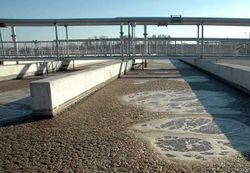 The two roads that mark the gateways to either end of La Linea also hold La Linea's main attractions, to the west you have the beautiful refinery, and to the east the wonders of La Linea's municipal sewage plant. Breathing the air of this town fills you with the joys of burning oil and shit.

The people of La Línea usually work in Gibraltar (as there are few chances for gainful employment in their wonderful metropolis), either in the tobacco export industry, or in the business of general goods procurement.

Today La Linea is a fantastic location for tourists looking for excitement and thrills on holiday. Just walking from the border with Gibraltar will take you past the lovely government housing blocks, where 'taking your life in your hands' really means what it says. Tourists and Gibraltarians love playing 'dodge the crim' whenever misfortune necessitates a trip to La Linea.

One of the most recent 'Bosses' of La Crimena was a delightful chap who went by the name Alejandro Hitlerez, his far right views on relations with Gibraltar won him plaudits from all of La Linea's unfortunate neighbour. His idea in 2010 to effectively levy a toll on all traffic entering and leaving Gibraltar won him the Robert Mugabe 2010 Gold Medal for Tact and Diplomacy. His most recent replacement Gemma Araujo, seems to be a bright spark, she has decided (in a town where some of the police and municipal workers have not been paid for 8 months - some are owed 20k Euros) to cancel the fireworks at this years fair - a saving of 12000 Euros. Total costs to the town for the fair will only be 320000 Euros this year. There was one bloke that dared to say maybe they should cancel the fair entirely for a year in order to pay salaries etc, but he was swiftly taken round the back of the town hall and dealt with.

Currently emanating from La Linea (apart from the stench of the refinery or the sewage works) is the news that fascism and racism is still strong in Franco's country. Upon winning the recent 2012 European Ball Kicking Championships a large percentage of the local scumpulation decided to decamp to the border with Gibraltar (Most probably because they were worried they would be pick-pocketed or mugged if they stayed and partied in La Linea's central square). When these brain surgeons reached the border they decided to smash up several Gibraltarian plated cars waiting in the border queue, one in which a terrified 3 year old toddler and mother were in. Lovely people these La Scumlians, please come visit! 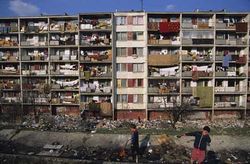 One of the more exclusive parts of La Linea