From Uncyclopedia, the content-free encyclopedia
Jump to navigation Jump to search
GOVERNMENT WARNING: According to the Surgeon General, the use of Raphael (singer) impairs your ability to drive a car or operate machinery, and may cause health problems.
Rafael Martos Sánchez

For those without comedic tastes, the so-called experts at Wikipedia have an article about Raphael (singer).
“Let's see who dies first. Which one of us will chug the first bottle of whiskey?”

~ Raphael on already being drunk

~ George W. Bush on being so stupid that he thinks Raphael is Camilo Sesto

This article is based on the Inciclopedia article Raphael, made freely available to Spanish-speaking womanisers from Europe and greasy latinos.

Rafael Martos Sánchez, best known simply as Raphael, and occasionally "El divo de Linares" is a Spanish singer and actor, best known for nothing at all. He is just as drunk as Camilo Sesto, and some people are wondering who is going to die first. (spoiler alert: it was Camilo. But seriously, Sesto is a much better singer. Sorry, was. Sesto can't sing anymore, and since September 8th, 2019, Sesto would never be able to sing again; not even attempt to. But Raphael never could sing.

He was born 5 May 1943 in a city called Linares, in the province of Jaén, which, for those of you who don't know, is in Spain. Even then, he began his famous rivalry with Camilo Sesto. Which is strange because Camilo wasn't even born until 1946. Rafael had a good laugh at his mistake and got drunk. And so he started his singing career at the age of three, mostly getting drunk and trying to sing afterward. It got to the point that, when he was nine years old, Rafael was recognized as the drunkest kid in Europe. 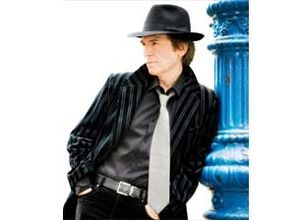 Contemplating when he will drink his next bottle

Rafael started his career with the Dutch label Philips. So, in a fit of severe delirium brought on for lack of a drink, he changed the spelling to Raphael. Not that it made any difference. His lovely baritone vocals made him quite famous, as they were the result of much alcoholism. His first singles with Philips were Soy mejor que Camilo Sesto (I'm better than Camilo Sesto) and Necesito dinero para unas chelas (I need money for some beer). Only the second single's title was anywhere near true.

Also, he was famous for doing strange and stupid things onstage, for example, kicking a mirror to pieces. And this is how he paved the way for Ozzy Osbourne to bite the head off a pigeon.

Later, he quit Philips (but kept his stupidly spelled name) and was signed to Hispavox, which is another record company you've never heard of. There he collaborated with a somewhat irrelevant songwriter named Manuel Alejandro.

Wikipedia doesn't make this too interesting, but it is enough to know that many people in Latin America like Raphael, and at some point, somebody did a parody of one of his songs, which was actually quite unexpected. Supposedly, he was very amused.

In 1972, Raphael married a journalist named Natalia Figueroa (born 1939), whom none of you have ever heard of. They have three children, but nobody cares. Also, some people think he is gay, but they are a bunch of idiots.

In 2003, both Raphael and Camilo Sesto got liver transplants because their collective drunkenness not only came thisclose to putting the major alcohol companies out of business, but also destroyed their livers. Unfortunately, they merely exchanged livers, so they are both dying.

At some point, Raphael did a made-for-TV film of his life, in which some random unknown actors acted as him, his wife, and their kids, in various decades. Meanwhile, neither you nor I saw this film, but it's okay. Whoever did see this movie, doesn't remember, because they were drunk the whole time they were watching.

Absurdly enough, Raphael has gotten the uranium disc, I guess because they were running out of chemical elements to describe his success.