Don Juan is a fundamental Spanish legend: a man who can seduce any woman, despite his "rather lame" look, using only his incredible latin sexual power. In Spain the name is sometimes used figuratively as a synonym for "lucky bastard". 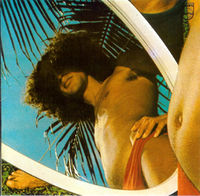 Don Juan in his classic red speedo. Virility at its best.

The original legend of Don Juan follows the story of a seductive Spaniard who captures the hearts and gains access to the naughty bits of every woman he meets. It is told to inspire men and women to free their hidden desires, to liberate their animal passions, and to make ficky-ficky like rabbits on a spree.

Indeed, it is a tale filled with romance, thin moustaches, and swimwear.

Most authorities agree that the first recorded tale of Don Juan is "El Burlador de Sevilla Tienes la Cara de un Perro, Pero és Muy Galante" ("The Seville Trickster Looks Like a Dog, But is Very Charming") by Tirso de Molina. It was published in Spain in 1615 by ¡Olé!—Publicaciones y Periodismo, in a plain brown jacket. An alternate version of 1623 had the title "Rezos del Rey" ("Prayers of the King") on the cover to allay suspicion—in those days merely touching a copy of "El Burlador" was good for three years in the dungeons of the Spanish Inquisition.

In this version, Don Juan is a pool cleaner who works all day at the castle gardens, clad only in his red Lycra speedos. The elegant ladies, refined damsels, and even the debauched old matrons cannot resist his charms. He captivates every lady in the court, including the blind old hag that cleans the toilets. Nobody can escape his Latin machismo, sweaty and suntanned and looking like he has an aubergine in his Speedos. Even the Queen sneaks off to the pool shack for a quick bolo-y-salchicha.

The King, angry at by being cheated by a guy wearing red lycra underwear, invites Don Juan to a duel. With the rising of the sun Don Juan faces his destiny: to die with his shorts on, or to commit foul treason by killing his King. The duel starts, and as the King raises his sword, Juan pulls up his tight red speedos and, dropping his sword, declaims poetry.

The King becomes captivated by Juan’s subtle words. He too drops his sword, and in royal iambic pentameter he not only forgives the pool cleaner for being so damn sexy but kisses him on both cheeks and cops a feel as well.

The King returns to his chambers with a inexplicable desire smoldering in his royal pants. 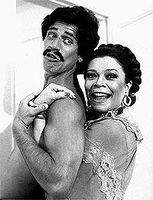 No matter if you are fat, or old, or a transvestite, or a dog. That old Don Juan is going to get right inside your pants. Muy rico!

The verses that Don Juan declaimed to the King have been judged "the sexiest thing anybody could say, ever" by a panel of Malaguena women between the ages of 95 and 107. They are used up to this day to get laid:

Works Derived From the Legend of Don Juan[edit]

The Don Juans. Damn, those guys are ugly...but still...so sexy!

There are many movies, bands, deodorant brands, and soap operas that have taken advantage of the Don Juan concept: a skinny man with a weird moustache who conquers the ladies just by talking with an Antonio Banderas accent. 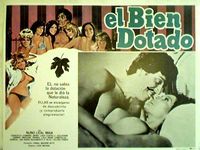 Poster for the Don Juan adaptation for the big screen, starring Javier Menendez. Can you feel that between your legs? Oh baby, that is the Don Juan super sexy power! Mamacita!

• The movie "El Bien Dotado" ("The Gifted One") was released in 1973. Critics lauded the movie, with female reviewers swooning and the males feeling a bit overwhelmed by the hot skinny man surrounded by naked girls. The Don Juan of "Dotado" had the Latin thing going, and as usual he wore only a little Speedo that showed every twist and turn of his, hum, sexual freedom.

“I never felt so excited in my whole life. Just talking about it makes me want to get to a room. He's...just...so...hot!”

The script interprets the Don Juan legend in contemporary terms. A semi-naked Latino pool cleaner with a thin moustache goes around seducing every woman and man he sees, including the unbearably boring and ugly ones. Taking them to a pleasure journey. Don Juan is played by the most attractive tropical actor at the time, Javier Menendez. It was such a big success that that year the Academy had to put the movie on the au concours category at the Oscars, otherwise the competition would not be fair.

"The Gifted One" was remade in 1995 with Johnny Depp as Don Juan and Marlon Brando as the cheated fat bald guy. However, the public recognized that Johnny Depp lacked Latin sexiness and the remake flopped at the box office.

In "The Teachings of Don Juan" (1968), C. Castaneda writes about an aging Don Juan who suffers erectile dysfunction and turns to sorcery trying to find a cure. Further published work by the same author dives in the less known facet of Don Juan; he was actually an space-faring otherworldy inmmortal mutant yellow egg, hence his sexyness. However, it was trashed by casual readers for not being sexy.